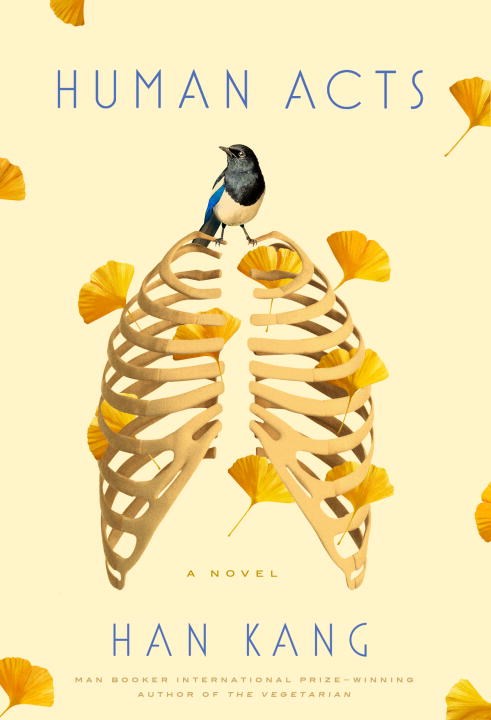 A good, well-researched book can quickly reveal holes in our knowledge of the world. Whether developed in a work of fiction or nonfiction, historical perspective is without a doubt one of the most important reasons we read. There have been so many human injustices perpetrated by governments around the world that it’s difficult to keep track of each terrifying atrocity. In Human Acts, Han Kang examines the horrific violence of the Gwangju Uprising, a massacre of civilians in one of South Korea’s largest cities that took place in 1980.

The Gwangju Uprising was instigated when military troops clashed with hundreds of university students protesting suppressive measures implemented by a new government, though the number of demonstrators grew to thousands within a day. The military soon resorted to beating, clubbing, and firing on unarmed civilians. In response, protesters robbed armories and formed militias, eventually pushing the military forces out of the city from May 22 to 26, but during that period citizens were essentially trapped in the city. By the time the military re-entered Gwangju, there were more than 160 casualties and hundreds of additional injuries.

Kang begins Human Acts right before one of the uprising’s most violent fights. Dong-ho, an adolescent assisting the militia headquartered in a local university, is part of a group who decide to peacefully surrender to military forces. He, along with other students and unarmed protesters, is murdered on site.

From this haunting entrance point, Human Acts follows multiple characters in order to  consider how this massacre effects the city and nation, as well as the personal ways in which those close to Dong-ho are forever scarred by his death. The novel addresses the dire, traumatic consequences of violence and suppression and provides an imperative global perspective in wake of so many senseless killings worldwide. Kang provides an intimate examination of humanity at its worst breaking point and considers both the immediate and long-term repercussions.

The prose is pristine, expertly paced, and gut-wrenching. However, what most distinguishes the writing is Kang’s ability to switch between first, second, and third person point of view. Each chapter brings to life a new perspective, some that are jarringly personal and others that necessitate more distance to bring broader context to the catastrophe. Yet, Kang’s use of second person narrative is what truly sets Human Acts apart. With Kang’s deft language and attention to detail, this point of view essentially places readers into the emotional and psychological terror of Gwangju. This also allows Kang to enter a haunting stream of consciousness, one that unfurls trauma in real time.

“You hesitate, lips twitching at the deep sense of dread this question never fails to thud into you. You’re waiting for those cotton shrouds, their white fibers stained with blood and watery discharge, to be peeled back; waiting to see those faces torn lengthwise, shoulders gashed open, breasts decomposing inside blouses. At night, snatching a couple hours’ sleep hunched up on a chair in the basement cafeteria, your eyes start open at the vivid horror of those images. Your body twists and jerks as you feel a phantom bayonet stabbing into your face, your chest.”

Additionally, Human Acts considers perspectives from varying historical eras, dating from the uprising to present day. By distancing characters from the events of May 1980 by time, Kang further considers the many ways in which trauma continues long after the violence has ended. Moreover, the chronological sequencing reveals the nature of transgenerational grief, memory, and the unbearable onus of survival.

Atrocities do not exist in a void. Every mass act of careless violence has personal, local, national, and global consequences that exist for generations. Human Acts grapples with the fallout of a massacre and questions what humans are willing to die for and in turn what they must live through. Kang approaches these difficult and inexorable queries with originality and fearlessness, making Human Acts a must-read for 2017.

Han Kang was born in 1970 in South Korea. In 1993 she made her literary debut as a poet, and was first published as a novelist in 1994. A participant of the Iowa Writers’ Workshop, Han has won the Man Booker International Prize, the Manhae Literary Prize, the 2015 PEN Translates Award, Yi Sang Literary Prize, the Today’s Young Artist Award, and the Korean Literature Novel Award. She currently works as a professor in the Department of Creative Writing at the Seoul Institute of the Arts.