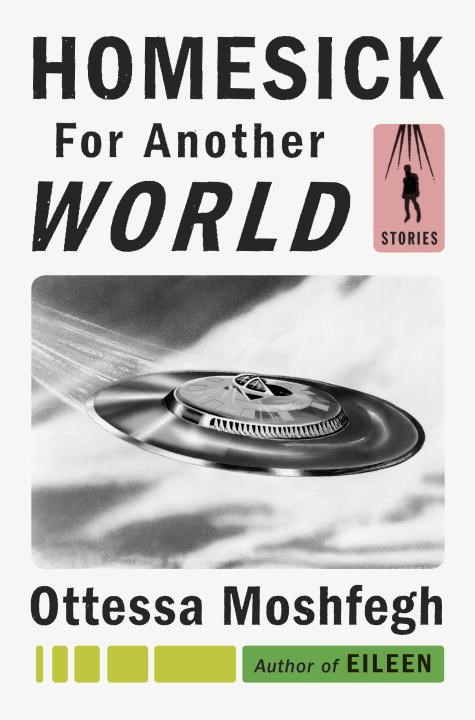 The different routes authors take to thread together a cohesive collection of short stories are endlessly fascinating. For some writers, a central idea or geography gives a group of stories a sense of unity. Others find more abstract ties. In Homesick for Another World, Ottessa Moshfegh’s stories distinctly function as one entity because each piece presents a character at his or her most honest. Her characters are simultaneously funny, endearing, despicable, and pitiable because they’re not holding anything back. Likewise, Moshfegh doesn’t seem to hold anything back in her writing. Her prose is unrestrained and lively, which makes her characters all the easier to invest in.

I recently had the pleasure of discussing Homesick for Another World with Moshfegh, who explained a bit of her writing process and how the collection came together.

Aram Mrjoian: The vast majority of stories in Homesick For Another World are told in first person point of view. Do you find yourself gravitating toward this perspective? Is the point of view part of the larger concept that ties all of these stories into one collection?

Ottessa Moshfegh: I am a little addicted to the first person point of view. It’s fun to get into a character’s mind and let a voice roam into the wilder regions of the imagination. When I’m writing in first person, I don’t feel like myself. I become my character. It’s like a virtual reality experience, and the language of the character’s thoughts always surprises and inspires me.

At best, it feels effortless. At worst, it’s revolting. It’s always fun. I think the larger concept that ties the stories together into a collection pertains to the delusion of self, self-hood, the pretension of identity, so the first person perspective made a lot of sense to me as the author.

Aram Mrjoian: Many characters in the stories of Homesick for Another World seem unhappy with their current situations, but they also don’t necessarily put forth much effort to change. Besides point of view, is there a common emotional thread or a feeling you were trying to convey that gives this collection a sense of wholeness?

Ottessa Moshfegh: Well, it’s very difficult for a person to change. I don’t really believe in free will. I think personal freedom is actually being in line with an organized spiritual cause set by karma, the gods, the stars, what have you. So I see all these characters as being screwed by their own destinies and struggling against them—ridiculously, sweetly, vainly. Sometimes they get a break. Sometimes they choose to look at things differently, and they graduate into the next delusion. I don’t see my characters as miserable people. I think they’re indulging in who they are, which is pretty hilarious.

Aram Mrjoian: The collection’s first story, “Bettering Myself,” won the 2013 Plimpton Prize from The Paris Review for fiction. That type of accolade gives a piece of writing a sense of critical literary heft, but, as a writer, do you find yourself happier with certain stories in Homesick For Another World as compared to others? Do you have a favorite?

Ottessa Moshfegh: My favorite story in the collection is the last one, “A Better Place.” It came from a deeper source within me, and I felt, having written it, that I never had to write another short story again. That story says everything I’ve been trying to say in my fiction. Someone said to me recently that this last story erases all the stories that precede it, and that was such a huge compliment.

Aram Mrjoian: Your characters are often relatable because of their naïve ambitions and unshakeable bad habits. Do you construct characters with the intention of conveying any type of moral lesson or philosophical message?

Ottessa Moshfegh: No, I am not that kind of writer. I don’t even really believe in morality or philosophy. It all seems pretty random to me. I think people have had enough of writers telling them what’s good, what’s bad, how to behave, who to be, who to hate, how to save yourself, etcetera. I don’t want to be anybody’s scolding mother or priest.

Aram Mrjoian: When you sit down to write a story, does an idea or a character come first? What serves as the catalyst?

Ottessa Moshfegh: It’s always different, depending on the project. Sometimes a story starts with an image or a scene. Sometimes it’s a story I have imagined fully and just need to realize. Sometimes I begin with a few words, getting at the sounds and rhythm of a sentence: I can fixate on the music of a phrase for days until I understand who is speaking, what is being said, what story is asking to be told, etcetera. The collection was motivated creatively out of a need to express the absurdity of my own self-seriousness. And some existential angst. And dread.

Aram Mrjoian: Homesick for Another World is grounded in minute details that place many of the stories in today’s world, but they aren’t pigeonholed by current trends or time-stamped technological references. When writing, do you find yourself thinking about how a work will be read in current and future context?

Ottessa Moshfegh: I think a lot about cultural associations people will make, to be used as a kind of shorthand for descriptions. I don’t worry too much about misinterpretation based on the reader’s context. If I did, I think I’d probably lose my nerve in a lot of cases.

Ottessa Moshfegh: I’m just wrapping up a novel these days. I must say I’m glad to be nearly finished. It was the most challenging project of my life—took me all over the world, in and out of insanity. A trip worth taking, I hope. But my next book will be a light satire. I don’t think I can write about psychic pain anymore. It’s too depressing. And, by now, unnecessary.

Ottessa Moshfegh is a fiction writer from Boston. She was awarded the Plimpton Prize for her stories in The Paris Review and granted a creative writing fellowship from the National Endowment of the Arts. Her first book, McGlue, a novella, won the Fence Modern Prize in Prose and the Believer Book Award. Her novel Eileen was listed as a Kirkus best book of 2015.