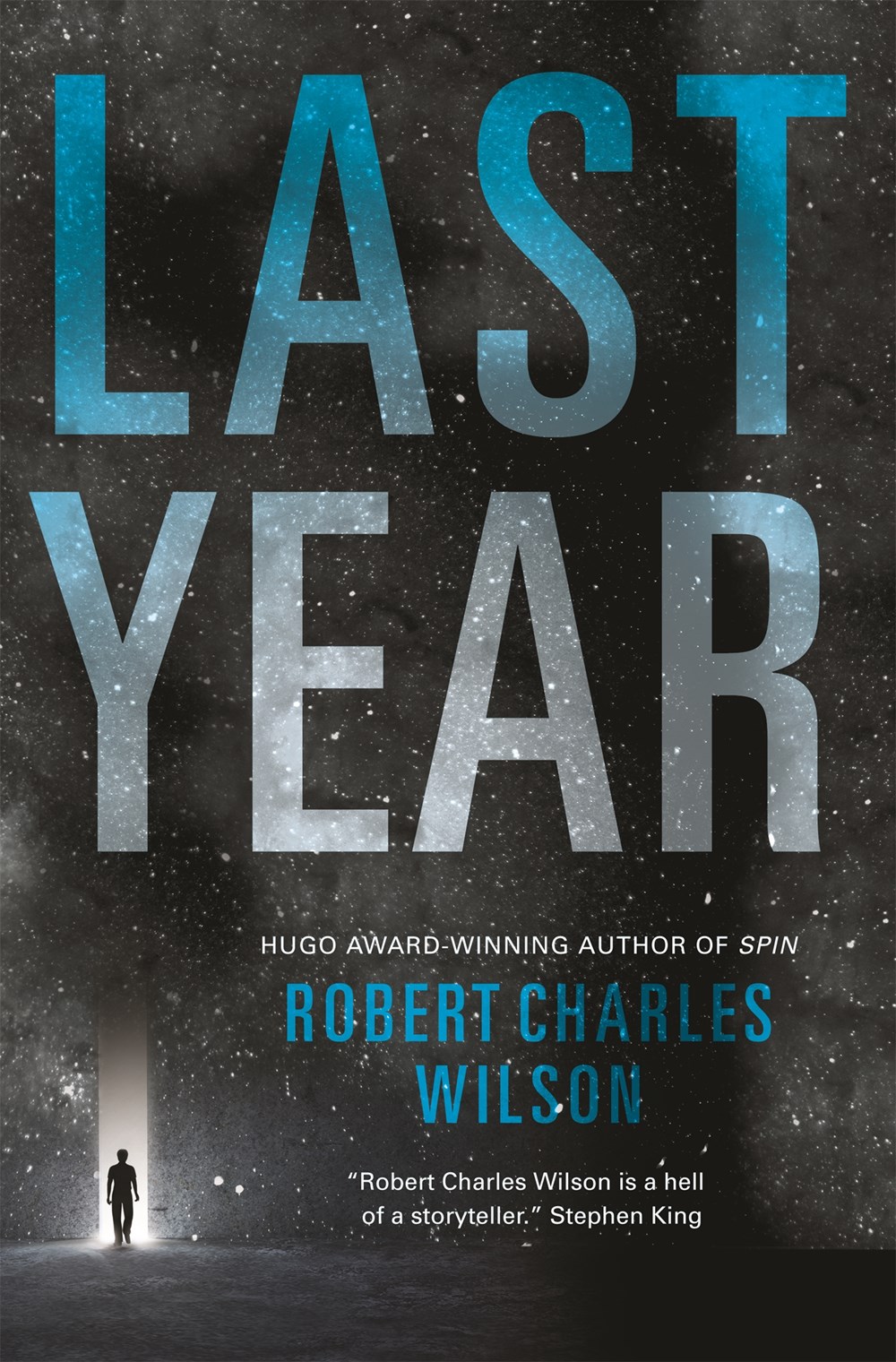 Before there were skyscrapers in Chicago, the city was just a small cluster of buildings sprawled across the Illinois plains. Robert Charles Wilson’s latest science fiction novel, Last Year, gives us a glimpse into that distant Chicago, going as far back as 1876. In this story, twenty-first century scientists have invented a technology that opens doorways into the past—but not our exact past. Every door is an alternate world, identical to ours up until the day we travel back to it. Each past can only be accessed once: as soon as the passageway is closed, it is closed forever.

One such passageway has been opened to the late nineteenth-century Ohio where Jesse Cullum exists. He is hired by The City—the resort that is built up by the future visitors around the open portal—and eventually comes to work with Elizabeth, a veteran from the twenty-first century. Together, they are tasked with tracking down contraband being smuggled through the Mirror: iPods, Stephen King books, and, most importantly, weapons. They travel the entire United States: from San Francisco to Chicago to New York. The authentic feel of the land and culture jumps off the page, as do both Jesse and Elizabeth’s reactions to their respective foreign experiences.

Wilson’s prose is beautifully constructed in this intelligent and gripping novel. The Hugo Award-winning author has written another sci-fi tale that will keep you reading for hours on end. I was able to speak with author recently about Last Year‘s ethical complexities, the notion of time-travel, and the historical context of the 1870s.

Sara Cutaia: There are many storylines that incorporate time travel into their narratives. Just off the top of my head—Harry Potter, Terminator, the new TV series Timeless…Your story takes a different approach to the notion of time travel, and it’s one that I very much enjoy: all these different threads of worlds next door to each other that are actually parallel universes, nearly infinite in number. What helped you to conceive of this version?

Robert Charles Wilson: I wanted a version of time travel without paradoxes. The question of backward causality in time travel—basically, if I take my time machine out for a cruise and kill my grandfather before he has any children, do I still exist?—has been a fruitful subject for science fiction for more than a century. Legions of talented writers have mined that territory for gold, and there are probably a few more nuggets left to be extracted. But that wasn’t the kind of story I wanted to tell when I sat down to write Last Year.

The modern narrative idea of time travel arose at about the same time photography became commonplace, and I wonder if there’s a connection. Hold a decades old photograph in your hand—say, a picture of Times Square in the 1920s—and imagination invites you to step inside it, to listen to the carriages and motorcars rattling by, feel the bite of a long gone April breeze, maybe recognize in a newspaper headline some hint of triumphs and catastrophes as yet undreamed of. And imagination invites the opposite conceit as well: what if a passing stranger caught by the camera stepped out of the frame into our world? What would 2017 look like through his or her eyes? That’s the kind of experience I wanted to give my characters, and that’s why I leaned toward a conception of time travel that dodges the tangled logic of paradox.

The premise also allowed a certain useful bluntness. The time travelers in Last Year aren’t shy about announcing their presence. Their motives are pretty obvious. “Here we are, we’re from the future, and for a certain price we’ll give you a taste of it. In the meantime, we want to buy some hotels and railroads.”

Sara Cutaia: The City and its employees frequently speak on the morality of what they are doing. Theoretically, if our real life scientists were to create a door to the past, what would be your feelings on the morality of traveling to and then eventually leaving these histories?

RCW: Once you step into such a universe it becomes as real as your own, which means you have certain moral obligations to the people who live there—at the very least, the obligation to deliver timely warnings about avoidable disasters. In Last Year, those moral imperatives run counter to an economic agenda that commodifies “authenticity” and wants to preserve it in the target universe, even if it means withholding vital information.

Sounds like it ought to be an easy choice, and I like to think I’d be on the side of the angels, but keep in mind how often and how easily, in real life, such ethical boundaries are bent or blurred.

Sara Cutaia: Though this science fiction novel is heavily involved with plot and mysteries, the main characters—specifically Elizabeth and Jesse—captured my attention equally as much as the storyline. How do you balance plot and character is such a masterful way?

RCW: I wish I had an easy answer for that question! Sometimes you labor to invent a character whose story reflects and embodies a theme and an idea. Sometimes those characters just stand up and announce themselves, as if they had taken up residence in the wordless part of your mind long before you ever decided to commit them to paper. Jesse and Elizabeth were those kinds of characters, whole and insistent from the first word. Lightning strike characters, as I think of them.

Sara Cutaia: The story has a lot of allusions and nods to historical people and events. What was your research process like for all the historical accuracies?

RCW: A basic fascination with the period in question is a good place to start—and the 1870s were a fascinating, troubled, scary time.

Research is easier than it has ever been, if you have basic internet skills. An amazing amount of archival material is online, including newspaper archives. Perhaps unusually, I also sought out and read some of the popular literature of the period: not the obvious classics, and not the dime novel stuff, but long forgotten middlebrow novels that once reached large audiences in America—authors like J.W. De Forest, or even the once immensely popular children’s writer, Oliver Optic. What you get from such sources is a sense of how people thought of themselves and others, their terms of reference, some of the diction they used, the proprieties they respected, and the proprieties they felt free to ignore. You begin to recognize a kind of period dialect, and with enough exposure you learn to speak it.

Sara Cutaia: By that same token, how did you go about making sure characters seemed authentic? You have Elizabeth, who is of our time, speaking back and forth with Jesse, who is of the 1870s. Their dialogue is very much of their own times. Was that a difficult thing to switch back and forth between?

RCW: Part of the trick was keeping in mind not only what these characters know but what they don’t know. Elizabeth is no historian—much of what she encounters in 1876 and 1877 takes her absolutely by surprise—and what Jesse gets from her is a vision of the twenty-first century that’s darker and more nuanced than anything featured in the dioramas at the City of Futurity. As for the dialogue between them, it was a joy to write. Their interest in each other played against their mutual incomprehension in ways that seemed almost electric: sometimes funny, sometimes dire.

Sara Cutaia: You’re a very prolific writer, and many of your other works focus on these aspects of travel and generational differences among characters. What is it about the past, the future, and even the present that posits so many questions best answered through science fiction writing?

RCW: If science fiction has a common generic theme, it’s the inevitability of change: change at every scale, from the personal to the planetary to the universal. That’s a big, resonant subject. Even the most trivial science fiction implies something interesting about the impermanence of the world, and the best science fiction speaks directly to it. It’s the one prediction that never fails to come true: change happens, and it won’t be exactly what you expect.

Sara Cutaia: Speaking of being prolific, can you talk just a bit about your process? Are you constantly working on a project until its completion, or do you jump around from idea to idea as they come to you?

RCW: I work on one project at a time, and I’m pretty dogged about pushing it to completion. Sometimes that’s easy, sometimes it’s not. I don’t suffer from writer’s block as a rule, but I’ve been through slow patches—an extended period of time when a day’s work might yield a couple of hundred limp, bleeding words. That can be dispiriting. On the other hand, generating ideas has never been a problem for me. I’m usually thinking one or two novels ahead.

Sara Cutaia: So, that novel ahead—can fans of yours get a glimpse into what you might be working on next?

RCW: The novel in progress is called The Cure. It opens in the near future, when medical science has designed a kind of biochemical rebuild for the human brain, useful as a treatment for chronic psychosis. But the treatment turns out to have unexpected side effects. Positive ones. “The cure” becomes a black market commodity, mental Botox for those who can afford it and don’t mind skirting serious ethical questions. But, of course, there are longterm complications. World changing ones.

Robert Charles Wilson was born in California and lives in Toronto. His novel Spin won the Hugo Award in 2006. He has also won the Philip K. Dick Award for his debut novel, A Hidden Place; Canada’s Aurora Award for Darwinia; and the John W. Campbell Award for The Chronoliths.