Fantasy Finds a New Heroine in ‘The Fate of the Tearling’ 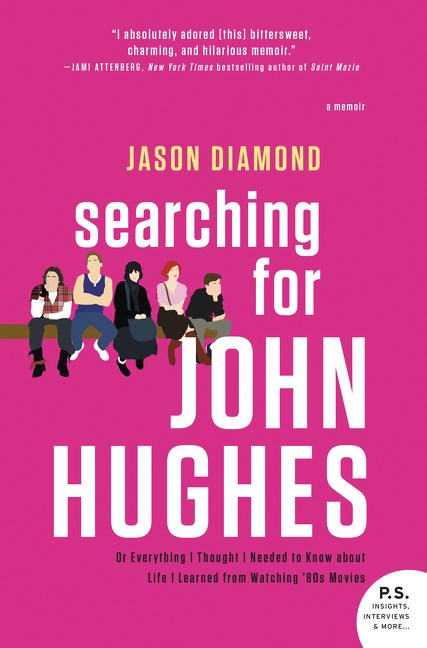 John Hughes movies were an important part of my life growing up, as they were for much of my generation. His characters and their stories made up an essential part of our adolescence. So it’s safe to say Jason Diamond isn’t unique in his obsession with Hughes’s films. But Diamond’s new memoir, Searching for John Hughes, is more than a nod towards his fervor and appreciation for Hughes.

Diamond grew up in the Chicago suburbs, which is the setting for most of Hughes’s classic films. After surviving his childhood and getting out of suburbia, he set out to write a biography of John Hughes. Not quite knowing where his story was heading, he hit one road block after another. Yet he pressed on even when the book seemed like a lost cause. In Searching for John Hughes, Diamond tells the story of his failed attempt at writing a Hughes biography with a healthy dose of self-deprecating humor. The result is a compelling, readable tale of an aspiring writer. I had the chance to speak with Diamond about his new memoir and his favorite Hughes films.

Rachel Léon: How did you realize this story about your attempts to write John Hughes’s biography would make a great memoir?

Jason Diamond: My first thought was I wanted to write a memoir about failure and how I learned to accept totally failing and eventually became a better person with the John Hughes biography as the center of that universe. I joke that I was thinking something like Larry David trying to write a Charles Dickens story, some young and dumb hero messing up but also growing up. I thought it was a funny enough idea.

I’ve always been attracted to characters who don’t get how silly or nuts they might be acting: Falstaff, Don Quixote, Oblomov, Ignatius J. Reilly, etc. And I saw—and, to a certain extent, still see—younger me as one of those types. I was bumbling through the world just kind of messing up with this weird goal I was fixated on. Sort of a real-life version of those characters.

That was the initial idea, but when I met the editor I ended up going with, she said something to the extent of, “I want to hear your entire story.” And something just clicked. I’d played around with writing essays about growing up, but it never turned into anything. I figured I could maybe take parts from that and see how it turned out. As I started writing the book, I noticed that my life story really does play into my obsession with the films of John Hughes and somehow works to make a complete book.

Jason Diamond: I have years of being edited by great editors behind me now. I didn’t have that when I was in my early 20s. I just thought you could write a bunch of words and that was it. I also had direction and the full story. I was really young and dumb and trying to piece together a biography and had really no business and no resources to do that. I was sort of doing everything wrong, and I’ve learned how you do things the right way now. I also learned you have to want to write something and not feel like you need to write it. I felt like I needed to write a John Hughes biography.

Rachel Léon: You strike a nice balance in the book of poignancy and humor, which echoes the feel of a John Hughes film. Did Hughes’s films impact the tone and structure of the book?

Jason Diamond: Yeah, I definitely think so. I think there’s a formula to a lot of his best films and I think without realizing I structured it to resemble one of those. Hughes saw himself as a writer before anything else and I think just the weird amount of times I’ve watched his films has impacted me in a lot of ways. I also had to have a happy ending because I’m a sucker for those and so was Hughes. I guessed that might turn some people off, but it’s my story so I figured I’d go for it.

In terms of my writing or the humor thing, maybe not as much. I think I’m more influenced by somebody like Nora Ephron. I sort of consider her my favorite writing influence. I have plenty of others, from Dickens and Edith Wharton to F. Scott Fitzgerald, James Baldwin, J.D. Salinger, Joan Didion, and plenty of others. But I’d never dare say I could even try to mimic what they did, although their influences are there.

Rachel Léon: If you were putting together a soundtrack for your book, what one or two songs would have to be included?

Jason Diamond: I think whenever I hear “I was a Teenage Werewolf” by The Cramps I think of how the lyrics are about being a “Midwestern monster” and how we all sort of feel like monsters when we’re young. That really sums a lot of things up for me. I’d also say something by the band Jawbreaker would have to be on there as well. I guess the question is would I want a soundtrack or would I want some type of score? Ideally I think somebody like Craig Finn would score my book. I’ve always loved his lyrics and music. There’d probably have to be a few blues songs by like B.B. King or Muddy Waters in there since this is a Chicago book.

Jason Diamond: That’s tough. I can’t really say I like any one more than the other, but I will say I aim to have a Ferris Bueller mentality every single day by attempting to go out there and have a perfect day. I love the mix of innocence and mischief in Home Alone, and I think The Breakfast Club is one of the most interesting ideas for a film I’ve seen in my lifetime. Those three aren’t necessarily my favorite, but I find I get the most from those and they intrigue me a great deal.

Rachel Léon: Your story is both a sobering and inspirational tale for writers. What advice would you give to aspiring writers?

Jason Diamond: It’s all sort of cheesy, but I realized these things: Don’t be afraid to fail. Don’t give up. Learn from your mistakes—and also learn from your editors. They might seem like they’re trying to ruin your life, but you learn a lot from the process.

Jason Diamond is the sports editor at Rollingstone.com and founder of Vol. 1 Brooklyn. His work has been published by The New York Times, BuzzFeed, Vulture, The New Republic, The Paris Review, Pitchfork, Esquire, Vice and many other outlets. He was born in Skokie, Illinois, but currently lives in Brooklyn with his wife, his two cats and his dog named Max.

A Pharmaceutical Voice: An Interview with Anne K. Yoder on “The Enhancers”

Reality is Not that Simple: An Interview with Jamil Jan Kochai