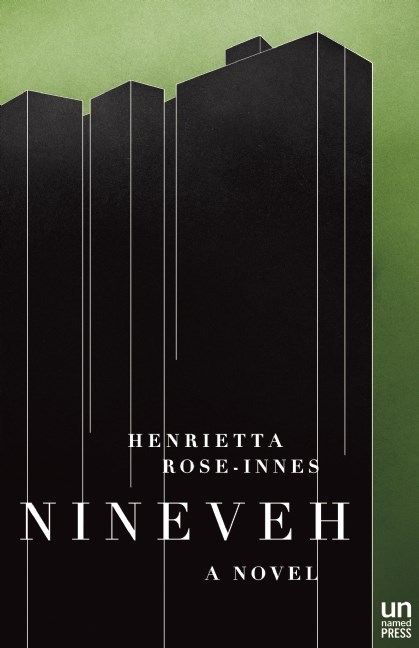 According to scripture, Nineveh was once the epicenter of the Assyrian Empire, the capital city to a dynasty of cruelty. In the Book of Nahum, the eponymous prophet predicted Nineveh would be destroyed by flood and fire as easily as ripened figs are shaken from a tree. The metropolis—which rested along the Tigris and was famous for its fortified walls—did indeed fall, and was soonafter buried in the desert and forgotten.

Henrietta Rose-Innes’ novel, Nineveh, derives its contemporary setting from this rich history, updating architectural elements and plagues for the modern age. In an abandoned luxury housing development that shares its name with the ancient city, Innes evokes a remarkable sense of place. The attention to setting stands out due to Innes’ ability to create an atmosphere both timeless opulence and modern practicality, all while tackling the fight for space between natural elements and manmade structures. In the new Nineveh, humankind has fractured and repurposed the bones of the Earth. We have cleared and tamed the wilderness, but the critters that claim home to Nineveh’s ecosystem won’t be so easily removed.

Nineveh begins with Katya Grubbs, founder of Painless Pest Relocations, who transplants insects and varmints with the assistance of her nephew Toby. As a child, Katya vows not to harm any animal after growing up under the abusive tutelage of her father, Len, an exterminator worthy of his occupation. Katya and her older sister Alma live out of dingy hotel rooms and moldy rentals while their alcoholic dad steals from clients and barely maintains odd jobs. Both daughters eventually escape and lose contact with Len altogether.

Mr. Brand, a wealthy real estate developer, hires Katya to deal with a locust-like infestation of beetles at his property, Nineveh, a job for which he had previously hired Katya’s father. Though the assignment is larger than what Katya usually handles, she agrees to the monumental task in hopes of a steady paycheck. When she moves into Nineveh, she awakens an unexpected connection with her lost father and learns about the true power of mother nature.

As high school English teachers love to explain, certain books exude specific colors. In the case of Nineveh, even excluding the cover art, that color is green. Innes’ writing is teeming with lush landscapes—a scattered map of forests, frog-croaking swamps, and piney thickets. Even Painless Pest Relocation’s uniforms (gardener’s overalls) are referred to as “greens.”

Besides bringing nature to the forefront, this literary aura also ties into the novel’s examination of life and death. Buildings, foolishly, are often associated with permanence. Many structures stand for lifetimes and therefore become more timeless in the mind than, say, a tree that has been rooted on the same plot of land for hundreds of years. The color green is a reminder of what has really endured the test of time despite humankind. Hence, extermination, whether it’s a pesky insect or human being, is also central to Nineveh.

“It’s strange, what disgusts people. Who would scorn the friendship of a gecko, for example: golden-eyed, translucent-skinned, toes splayed on a farmhouse wall? Who could resent a long-legged spider, knitting its silver in the corner of a room? But they do: people will pay to have them killed, poisoned, destroyed.”

As the title suggests, Mr. Brand’s housing development is doomed from the start. Exterminating the beetles—colloquially called goggas—is perhaps the worst problem Nineveh faces, but there are other issues on the periphery. The novel examines displacement, socioeconomic division, and deforestation, without ever losing ground on the page to a harangue or over-indulgent lecture.

Through Magic to Realism in “Caul Baby”

Regarding pacing, Innes’ patient physical descriptions create the sensation of being watched from a distance, as if some unknown force is always slinking just out of sight. The narrator remains close to Katya, but there is a constant awareness that a menagerie of humans and animals are within Katya’s purview. This collective existence—an unshakeable feeling of invasion—exposes the temporality of Nineveh and reveals the frailty of civilization in general.

Nineveh may be immersed in biblical and historic imagery, but in whole it is a remarkable inquiry into humanity’s ongoing relationship with nature. Innes provides every detail of both human and natural architecture with impeccable precision. This attention to the physical world informs Nineveh’s well-mapped structure and propels forward a refreshing narrative, rife with irascible insects and immovable greenery.

Henrietta Rose-Innes is a South African writer based in Cape Town and Norwich, U.K. Nineveh was shortlisted for the M-Net Literary Award and the Sunday Times Fiction Prize, and in 2015 (in French translation, Ninive) it won the François Sommer Literary Prize. She’s previously published a collection of short stories, Homing, and the novels Green Lion, Shark’s Egg and The Rock Alphabet. In 2012 her story “Sanctuary” came second in the BBC International Short Story Prize. In 2008 she won the Caine Prize for African Writing, for which she was shortlisted in 2007. Also in 2007, she was awarded the South African PEN award for her short story, “Poison.”

Why Cities Are Natural Habitats, Too

What Zombies Can Teach Us About Fighting Climate Change

How Humans Can Be Better Neighbors