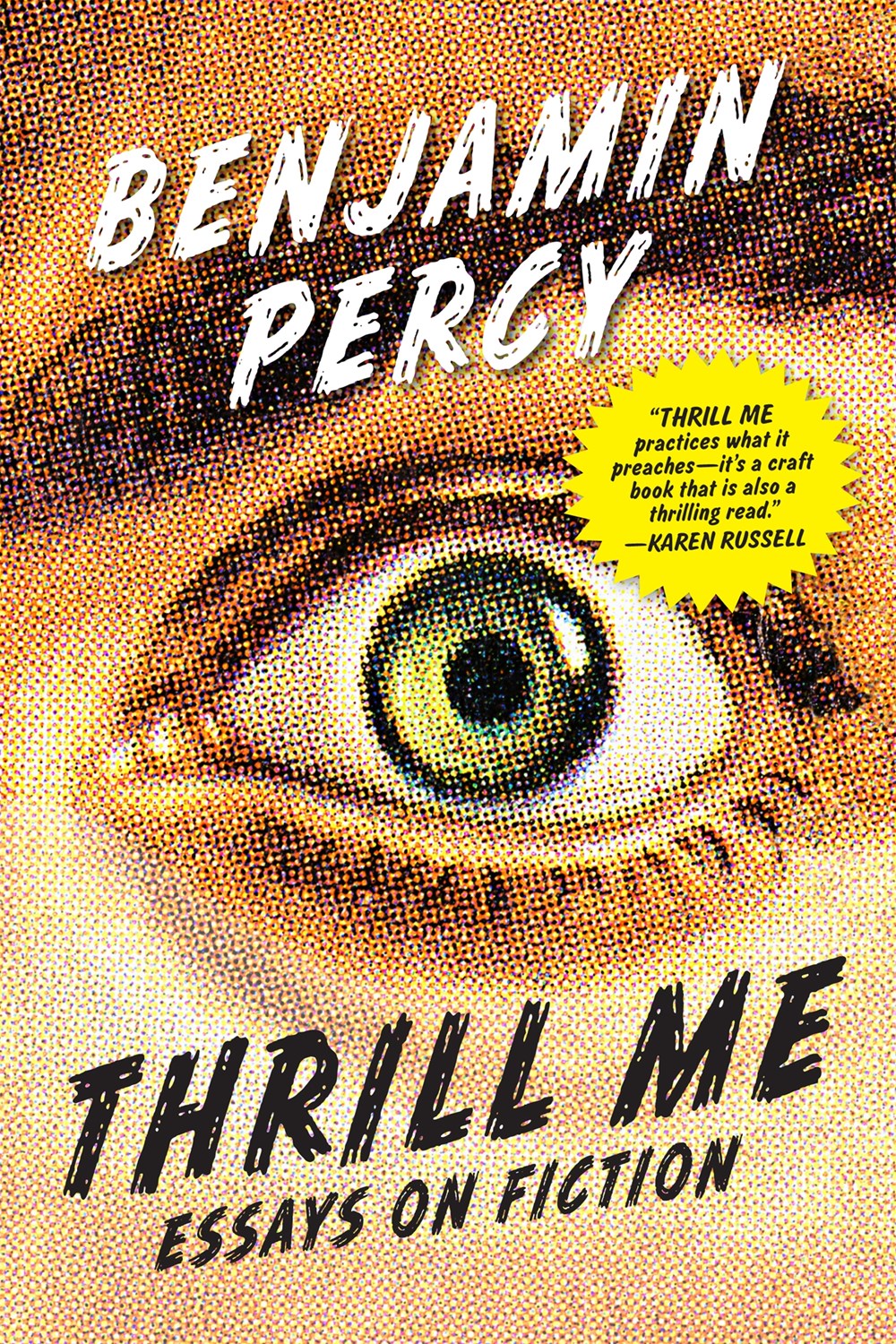 You may have heard of Benjamin Percy, the Whiting Award-winning literary writer.

Wait. Benjamin Percy, who wrote a werewolf book (Red Moon) and a post-apocalyptic Lewis and Clark saga (The Dead Lands)?

Same guy. Teacher, essayist, novelist, screenwriter, with a voice for old timey radio and—thankfully for aspiring writers out there—a new nonfiction book that skips over the labels and gets to the good stuff: Thrill Me: Essays on Fiction. How do you write story that keeps readers turning pages late into the night? How do you thrill readers?

Lori Rader-Day: There are a lot of writing advice books out there—what do you think makes this one different? Which books were your role models? Which books have you learned from/enjoyed?

Benjamin Percy: I try to read a craft book every year—just to challenge my way of understanding narrative. Understanding Comics by Scott McCloud is one my favorites, and I think it should be required reading for anyone who cares about story (no matter the medium). Story by Robert McKee changed me profoundly as a writer (and reader/filmgoer). I also love The Art of series at Graywolf Press—and I quote often from The Art of Subtext by Charles Baxter.

Karen Russell said some nice things about Thrill Me, and in doing so referred to it as a sly memoir. I hadn’t thought about it like that, but I see now that she’s right, which gives the book something in common with On Writing by Stephen King and Bird by Bird by Anne Lamott and The Writing Life by Annie Dillard.

Thrill Me isn’t your standard craft book in that it acknowledges a wide variety of sources: novels, movies, television shows, comics, and music. I’m talking about the fussiest of literary short stories and I’m talking about the popcorniest of summer blockbusters, all in an effort to figure out how to tell a story that is both artfully constructed and compulsively readable. With the rise of the MFA program, there has been a circling of the wagons, a snobbish protectiveness of literary realism and a fetishized appreciation of pretty sentences and a condemnation of anything that reeks of plot or genre. I’m battling back against that. I’m all for pretty sentences, mind you, but there’s nothing wrong with making the reader wonder what happens next.

Lori Rader-Day: Many of these essays are from sessions you’ve done and from pieces you wrote for Poets & Writers. How did this book project get started?

I warped and polished the lectures into essays, many of them published by Kevin Larimer at Poets & Writers magazine. I heard often from professors who said they were photocopying the essays and using them in their classes…

So when Jeff Shotts and Steve Woodward (at Graywolf) approached me about putting them together into a collection, a kind of craft toolbox, I said, hell yeah. We then spent a year or so expanding and merging the essays, building a book.

I didn’t set out to write a craft book—this is a decade’s worth of critical analysis. But all of the essays seem to address plot devices, the orchestration of suspense, or the borderlands of literary and genre fiction.

Lori Rader-Day: Did you have a “perfect reader” in mind? Who is going to find this book most valuable?

Benjamin Percy: There’s no greater compliment than hearing your work is being taught in a classroom. I certainly hope that’s the case for this book. It’s equally relevant to the beginning or advanced writer.

But I think (or hope) that it’s also relevant to anyone who cares about story, that it will change you into a more appreciative and strenuous reader.

Lori Rader-Day: I like your ideas about literary versus genre—that there isn’t really a “versus” and the best of both should engage the reader. Can you talk a little about that, and how your book will help writers who consider themselves to be crafting either, both?

Benjamin Percy: What is Cormac McCarthy? All the Pretty Horses is a western. Child of God is horror. The Road is post-apocalyptic. No Country for Old Men is crime. Suttree is capital L Literature. Really, who cares? It doesn’t matter. There’s such an obsession—especially at universities and at conferences like AWP—with taxonomy.

I have zero concern with these phantom barricades. I’m interested in telling the best story possible. And these days I’m most interested in authors like Margaret Atwood, Kate Atkinson, Joe Hill, Marlon James, Kevin Brockmeier, Lauren Groff—who are neither fish nor fowl, not literary and not genre. They write sentences that sing, characters so three-dimensional you’ll be wondering about them years later, and plots so gripping that you forget to breathe.

Lori Rader-Day: You ended up putting a lot of biography into these essays. How comfortable was that, and why did you choose to do it?

Benjamin Percy: Craft books are—generally speaking—boring as hell. I wanted to live up to my title and juice up the material, thrill the reader. The personal anecdotes make the craft discussion more colorful and hopefully help people understand how much this discussion about story matters to me.

Lori Rader-Day: What’s the one piece of advice you give to beginning writers who approach you?

Lori Rader-Day: Tell us about your current or next project?

Benjamin Percy: Comics have taken over my life lately. I’m writing Green Arrow, Teen Titans, and now James Bond. I just finished the script for Bond #1 (which releases in March) and it feels like the perfect medium: as if I’m simultaneously making a movie and writing a novel.

Benjamin Percy is the author of three novels, most recently The Dead Lands, as well as two books of short stories. His honors include an NEA Fellowship, the Whiting Writers’ Award, two Pushcart Prizes, and the Plimpton Prize.

The Art of Dying in “Aurelia, Aurélia”

A Collection Of Cross-Genre Shivers