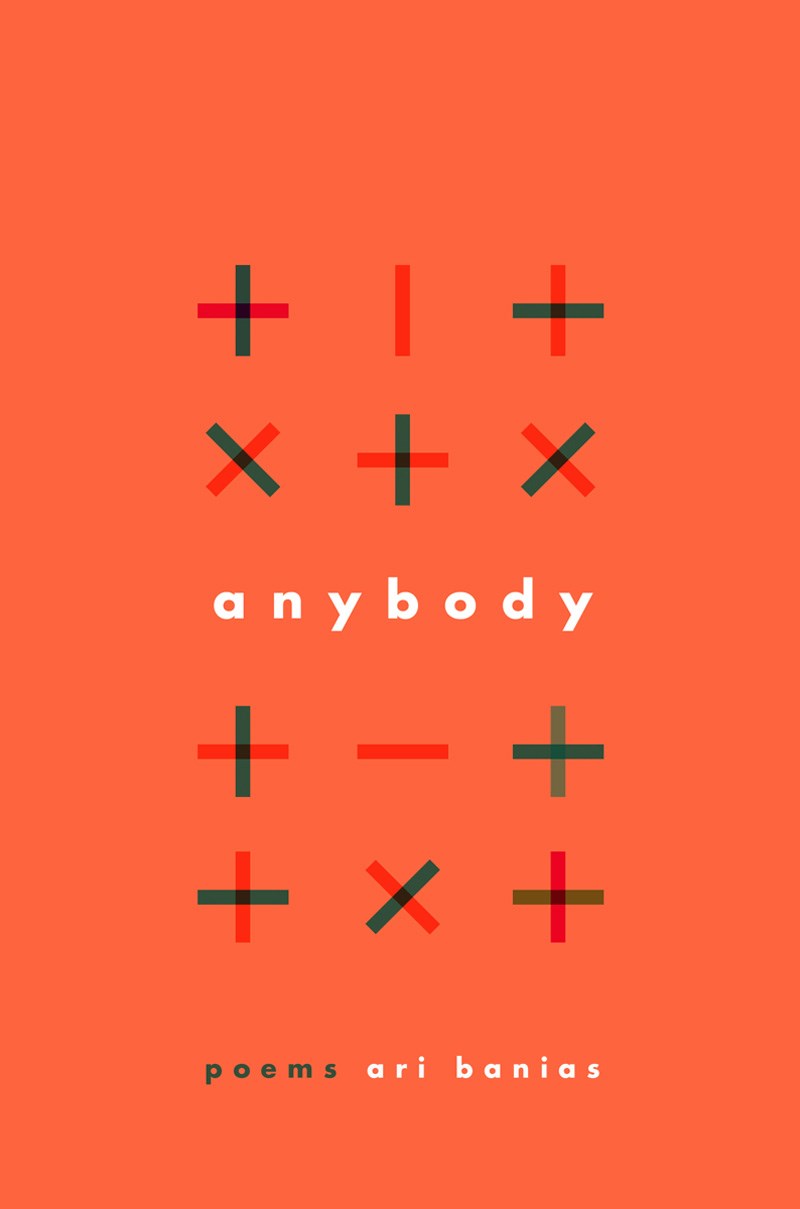 Sometimes you just have take a mirror to your insides and look into it as you unravel your guts and watch your many selves spill out into the earth in rivulets. In his debut poetry collection, Ari Banias settles into a sweet spot between introspection and examining external ephemera. Anybody harnesses a duality that considers one’s identity from the confines of a darkened broom closet whilst simultaneously attempting to make sense of the metaphysical from an arcadian setting.

This collection takes quick-witted brushstrokes as it tackles societal boundaries, then slows down to meditate on the minutiae of the spaces that define us and the inaccessible spaces, too. While the pacing and mood change from poem to poem, there’s a playful self-awareness that fastens them all together around an overarching, almost-tangible aura.

Early in the collection, Banias muses over windows. We are introduced to a narrator who’s been gifted—cursed?—with a heightened sense of recognition in the midst of even the most humdrum of activities:

What’s personal is being here with all of you.

You know how you can’t really look out a window without it
being a thing you’re doing,
wistful or just framed in its way by you
Being you and the window being a window? It isn’t casual (18).

At first glance, Banias appears to romanticize the act of staring out a window à la Wes Anderson. But Banias sees the window as more than a prop for a perfectly aligned film shot. This excerpt alludes to the intimacy of our connection to others—inanimate or not—and the accountability we must have over these connections.

In a later passage, Banias returns to the window as an apparatus of self-reflection and further examines the individual’s relationship with others. He approaches the notion that there’s a moral obligation that comes with social interaction:

I saw one kid the other day point a phone
from their window into mine to take a photo of me I wanted to take
one in response as a reminder that hey it’s a window
Not a mirror and the object talks back (18).

Whether it’s in the act of taking photos of strangers—too clouded in the thought process of selecting an Instagram filter to be bothered with asking for permission—or composing mean tweets with total disregard for the party on the receiving end, we’ve devolved into self-serving blobs who often forget to see the humanity in others.

Anybody pays special attention to location. Banias describes urban landscapes with a fanciful quality usually reserved for pastoral poems. However, rather than painting an idyllic portrait of rural life, he takes the grime of city living for what it is and in “DOT DOT DOT” he embraces it with lines like “Touch me lightly as we walk around the polluted lake.” He writes:

smell the eucalyptus reminiscent of cat piss.
Glance with me into the cardboard box at the discarded khakis
and rollerblade suitcase, and touch my shoulder. This is the key
broken off inside my card door in desperation by a stranger (89).

Banias extracts the hazards of urban dwelling and deposits them against the backdrop of a date. In his own tongue-in-cheek way, he seems to poke fun at the pastoral poem as he reworks it to praise the ugly.

Anybody is about the the self and its ever-changing forms. It isn’t necessarily a journey of self-discovery or self-actualization, or even self-realization. It is about recognition. In tribute to Lauren Berlant’s Cruel Optimism, Banias titles one of the tail-end poems in the collection, “Recognition Is the Misrecognition You Can Bear.” Cruel Optimism is a text that investigates precarity in the context of the public sphere. It carefully considers the consequences of putting a halt to the categorization of identity in order to reorient our sense of self based on the particular objects we’re affected by.

Ari Banias’ Anybody is, in part, a generous response to Berlant’s case study on identity and self-recognition. Moreover, it makes strides of its own in probing the constructs of these aforementioned items. This is a collection that can be read in one existential sitting, but it begs to be reread many times over. Depending on your disposition going into Anybody, a new truth can be unlocked every time you pick it up.