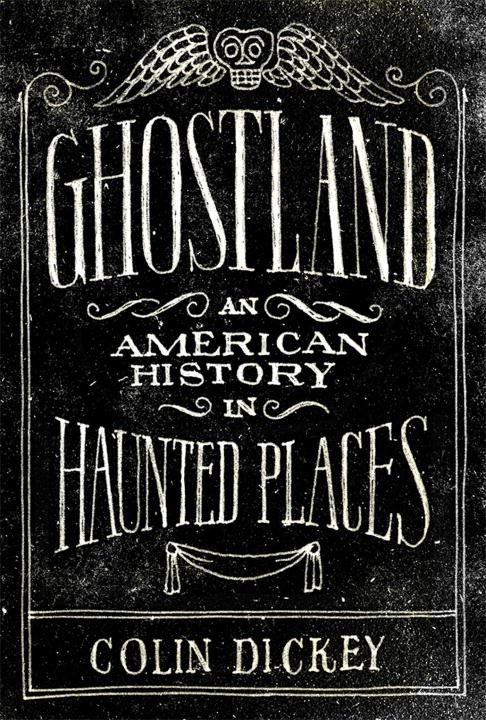 How does an ordinary cemetery become the site of mysterious lights and whispered voices? What makes an abandoned farmhouse the perfect setting for a grizzly murder? When does a real-life abduction in the 1950s turn into a campfire tale of revenge? These questions comprise the skeleton of Colin Dickey’s Ghostland: An American History in Haunted Places, a tight analysis of the most haunted houses, hangouts, institutions and towns in the U.S. that reveals how Americans love to embellish history with the paranormal.

Ghostland has its own unique history as a book, originating in lectures at Machine Project, Acme Studio, Odd Salon and Death Salon as well as essays in the Paris Review and the Virginia Quarterly Review. Dickey, who holds a PhD in comparative literature from USC, leaves no gravestone unturned and no trapdoor unopened. Each chapter is an amalgamation of vivid sightseer descriptions, interviews, and the kind of folklore only a local could know. His occasional first-person accounts affirm he’s combed asylum halls and grave markers as thoroughly as the research archives.

Throughout, Dickey connects themes in each story to literature, philosophy, psychiatry, or sociology, making for a deceptive, albeit entertaining, way to eat your vegetables. Case in point: the historic Shockoe Bottom neighborhood of Richmond, Virginia, where one can throw a stone and hit six haunted buildings. It was one of the most heavily trafficked slave trading areas in the U.S., second only to New Orleans. Why then are all its stories about white ghosts? New Orleans, meanwhile, markets the mysterious allure of its French Quarter through ghost tours while deliberately hiding its racist past. “Because ghost sightings are so ephemeral, and so vague,” Dickey writes, “they can easily be attached to the dominant narrative and only that narrative.”

Portland, Oregon doesn’t hold an overtly racist history, but it’s still guilty of embellishment. Cathedral Park beneath the St. Johns Bridge is allegedly haunted by the ghost of abducted and murdered teenager Thelma Taylor. The legend acts as a springboard for Dickey to introduce a phenomenon called residual haunting: the belief that certain inanimate objects (in this case the St. Johns Bridge limestone) are primed to record imprints of certain actions that they then play back later. Whether one believes in residual haunting proves mute. Taylor didn’t die under the bridge, she died eight blocks away.

Dickey has a knack for breathing life into an urban legend and then letting the air out, making Ghostland satiating for skeptics. One would have difficulty denouncing the book for pandering to pseudoscience. Dickey is astutely self-aware, carefully avoiding embellishing his own ideas. In fact, it may be easier to argue Ghostland is too conservative: some ghost stories might be convincing enough to make the most hardened skeptics think twice.

LA’s Cecil Hotel was home to the likes of Night Stalker Richard Ramirez and Austrian killer Jack Unterweger, but its calling card may be Elisa Lam, whose mysterious death in 2013 was beyond any conventional explanation. An elevator security video of Lam before her disappearance depicts her acting in what can only be called strange: for several minutes she exits and re-enters the elevator, at one point appears to hide in a corner, then talks and gestures in the hallway while contorting her arms and hands. Three weeks later her body was found in the hotel’s rooftop water tank. Dickey glosses over much of the story (the full video is online) and (in a rare moment for the book) fails to convincingly debunk it or connect it to a darker narrative. The Elisa Lam story is simply hard to explain.

One can’t also read Ghostland and not notice a west-coast bias (Dickey grew up in San Jose, California, near the Winchester Mystery House). California locales seem overly represented while Illinois, for example, receives one mention despite boasting a legendary list of haunted places. Bachelor’s Grove, just an hour southwest of Chicago, is one of the most haunted cemeteries in the U.S., yet it isn’t mentioned. Nor is the famous Resurrection Mary. Chicago alone has enough haunted history to fill several books: the Jane Adams Hull house, the murder castle of H.H. Holmes, the Eastland River disaster site, the site of the St. Valentines Day Massacre in 1929, the Congress Hotel—the list goes on. For an artist’s take on Illinois, namely John Wayne Gacy and the ghost of Carl Sandberg, musician Sufjan Stevens’ Illinois is unparalleled.

Granted qualms could be had by all 50 states, and it’s easy to see how Ghostland might have grown to double, even triple in size. Dickey’s take on America’s haunted history may not be comprehensive, but at its core Ghostland is as informative as it is entertaining, a rare balance of the supernatural and the academic. It’s a must-read this Halloween and worth revisiting many times after.