‘The Red Car’ Is One Hell of a Joyride 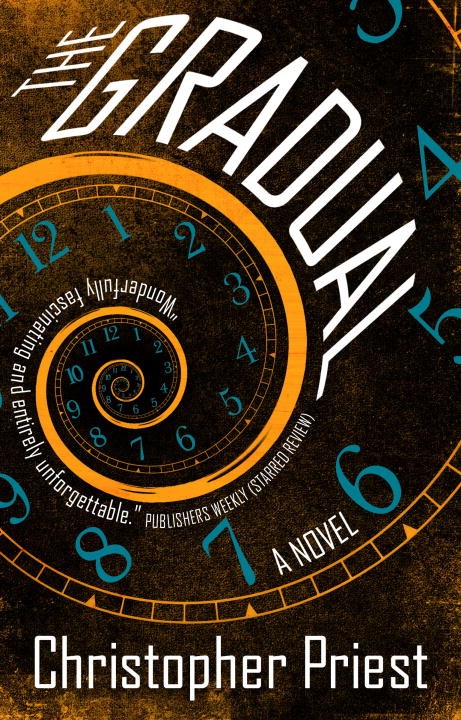 Whether you recognize the name Christopher Priest or not, you’ve probably “seen” one of his novels. The British writer’s 1995 historical, epistolary novel about two rival magicians, The Prestige, was adapted for film by Christopher Nolan in 2006. But Priest is the author of over a dozen additional novels and several short story collections. His newest novel, The Gradual, is about an unpopular composer living in a fascist state who finds success in the Dream Archipelago, a collection of thousands of forbidden islands. I recently spoke with Priest about his writing process, the problem with genre classifications, and why he keeps returning to the Dream Archipelago in his fiction.

Amy Giacalone: You have written many critically acclaimed novels over several decades. Do you think your writing changed over the years?

Christopher Priest: I suppose all writers change as they go on. You get better (or you can kid yourself you do), and you gain experiences that can be useful. At the same time you become increasingly aware of your own shortcomings. I have a constant dislike of repeating myself, so I worry about all the material behind me already written, which I shouldn’t go back to. This tends to cut down on possibilities for the next book, but at the same time being harder it makes whatever I do much better refined, or better thought out.

Amy Giacalone: Can you talk a little bit about your writing process? Where do you start new stories—with a concept? With a form? With a character?

Christopher Priest: If you’re talking about the actual start—the first day, the blank sheet of paper (or computer screen)—then in all honesty it begins for me with an idea, a concept, a situation. I can’t write a word without a subject. The crude, simplistic version of that challenge is: “I wonder what would happen if …?”

That is the first of the three central questions of fantastic literature, the elements that set it aside from the general novel or short story. Like many other writers of the fantastic I’m curious, speculative, I love ideas, probabilities, doubts, questions, possibilities, but I have to have something like that to get me started. However, before I’m halfway down that first blank page the other two central questions are also bothering me. Those are: “Yes, but if it was to happen, would it matter?” (The answer to that lends seriousness to what you are starting to write, and if you can’t answer it you will write something trivial.)

The third question is: “Yes, it could happen, and it would matter … but would it matter to me?” (The answer to this third question gives the writer a sense of involvement in the material, a point of view. It creates an identity, a personal stamp. Without it the story will be impersonal, technical, cold.)

Once those questions are hovering around, seeking answers, then the other essentials of writing tend to start rising up: the characters, the emotions, the problems, the desires, the moods. Ideas are just the skeleton, the armature … I can’t write without them, but I can’t write at all if they are all I have.

This is not a recipe or a method. The true answer to your question is “I don’t know”, because for me all writing is a bit of a mystery. I always say (and mean) that every time I start a new story or novel I have to learn how to write all over again.

Amy Giacalone: You’re usually considered a science fiction writer, but lately I’ve heard you referred to as slipstream more often. What is the difference between the two? How would you classify yourself?

Christopher Priest: I try to avoid labels, even labels I apply myself. And that’s how it is: I just write what interests me, what I can write. In practice, this almost always means working in the fantastic, because that’s what I turn to every time, what I love doing. Many people call that science fiction. There are other names for it: speculative literature, etc. I try to avoid those too, not just when talking to people, but when I’m thinking, trying to imagine. Modern science fiction has become an orthodoxy, a set of assumed and unwritten rules. For me the essence of the fantastic is freedom from orthodoxy.

So if anyone asks me if I write science fiction I tend to frown and grumble and look evasive. I don’t want to be pinned down, categorized by other people’s prejudices. And the SF field is now manifested in so many diverse forms (gaming, movies, advertisements, comics, etc etc) you never quite know what those prejudices are.

I feel the same way about “slipstream”. When I first heard about it some years ago I thought it was a good idea, but then I realized that an orthodoxy was quickly starting to emerge about that too. Writers like Bruce Sterling were laying down the law of what was and what was not slipstream.

If pressed, I will argue that “slipstream” is not a category as such, but an approach, a way of thinking, an attitude. If you accept that, then slipstream contains science fiction (and fantasy, horror, etc), as well as various other forms … such as magic realism.

Unclassifiable films like Being John Malkovich also slip under the slipstream umbrella.
But don’t go down this road of trying to pin labels! What matters most is that every story or novel should stand alone, should be capable of being judged by open-minded standards, that it should reflect the ideas, ambitions, desires, experiences of the individual author whose name is on the cover—it should not represent the assumed or unwritten rules of a genre, created and described as a shorthand for trying to put literature into pigeonholes.

Amy Giacalone: How do you decide on a voice and structure for each new story? The Gradual has such an introspective, calm narrator. Was this always how you wrote it? Or did you try out many different voices or points of view?

Christopher Priest: The protagonist is a composer, an artist. The voice was always the same, from the first draft onwards. But I did write an earlier version in the third person … in the end I couldn’t make it work properly, went back to the beginning and recast it in the first person. As soon as I did, those three central questions I mentioned really kicked in, and I knew I had a book I could write and finish.

In my experience you cannot create a voice, or try out several to see which one might be best—the true voice will emerge as you write the characters, the story, describe the ambiance, etc.

Amy Giacalone: The Gradual takes place in the Dream Archipelago, a fictional setting you’ve used since early in your writing career. Why do you keep returning to it?

Christopher Priest: I keep returning because I haven’t finished with it. I respond to the possibilities it presents, as it gains depth in my imagination. It does not have a static or literal reality, even within the terms of fiction.

From the outset, when I wrote the very first stories set in the Archipelago, I never made any attempt to be consistent … so if anyone could be bothered to try to systematize the islands (such as by drawing a map, etc) they’d soon discover anomalies and contradictions, and the task would become impossible. Islands in the Dream Archipelago are never in the same place twice, some of them have the same names as each other, and the metaphysical qualities tend to change from one book to the next. Once I had realized this was happening, I made a strength of it: the world of the Archipelago became metaphorically a tesseract, or a Klein bottle, impossible to visualize or construct in the natural world, so it is whatever I want it to be, and whatever the reader wants it to be. This liberates us both from trying to seek the “truth” about the islands. There is no truth—there is just the next story.

Amy Giacalone: How is The Gradual different from other Dream Archipelago books?

Christopher Priest: It’s the first novel that is strictly linear. It tells a story from beginning to end, in that order, with a single narrative. It is therefore, I hope (and intend) a straightforward read, with everything more or less worked out.