The 10 Best New Books This October 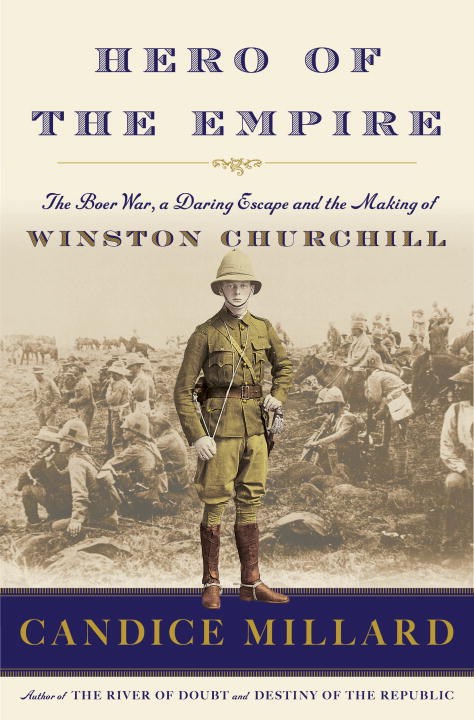 By the time Winston Churchill was 24 years old, he’d already written three books, fought in wars on three continents, run for Parliament, and become the best-paid journalist in Great Britain.

It would seem the only direction for Churchill to go would be down. So in a way, when he’s taken prisoner during the Boer War in South Africa, it might be natural to assume the gig’s up for this guy.

But, no, even a reader who doesn’t belong to the enormous club of Churchill scholars knows that the man lived for 90 years, was England’s Prime Minister twice, was a decorated war hero, and won the Nobel Prize in literature. Among other things.

Bestseller Candice Millard’s new book, Hero of the Empire: The Boer War, a Daring Escape and the Making of Winston Churchill, doesn’t focus on the man Churchill became, but on the man he was at 24.

Millard is no stranger to writing about mythical men. Her first book, The River of Doubt, traced Theodore Roosevelt’s treacherous exploration of an uncharted river through the Amazon.

Her second, about a much less mythical man, President James A. Garfield, was called Destiny of the Republic, and illuminated a period of rapid change in the United States, politically, socially, and scientifically. She paints Garfield as America’s darling—under her spell, his death will break your heart.

Millard’s brilliant modus operandi is to identify a singular, little-explored event in a well-documented life. She then uses that very pointed story as a splitting wedge which she drives into the person’s character, cracking it wide open in a manner usually reserved for fiction.

And so it is with her account of young Churchill. She doesn’t present him as a great statesman. Intellectually gifted, bossy, arrogant, ambitious, yes, but the hero of the world-stage has yet to emerge. In fact, the project of the book is to catch that hero in the act of emerging.

The story of his capture during the Boer War (1899-1902) is mentioned in many of the 12,000-plus books written on Churchill; it’s not an unknown incident. But Millard’s rendering of the story is fresh.

Through meticulous research of primary sources—see her Acknowledgements and Notes pages— she crafts historically accurate dramatic scenes that fill the senses. It’s impossible not to feel the claustrophobia of capture when Churchill’s detained in a corrugated-iron shed.

…he heard the dry, crackling sound of paper at his feet and looked down to find that the floor was covered with old railway forms and account books, ripped and stained and piled at least four inches deep.  Above him, in the raftered ceiling, a skylight blurred as the rain fell on it in a dull, heavy tapping.

And it’s equally impossible not to hold your breath after his escape when he’s hiding just inches from two local men in some bushes near the prison’s perimeter. A “cat, tearing blindly through the underbrush, crashed into Churchill’s silent, crouching figure.  Shocked, the cat ‘uttered a miaul of alarm’ and tore back out of the shrub, rattling the branches and making a tremendous racket as he went.”

After leaving the bushes, undiscovered of course, Churchill must find his way through 300 miles of enemy territory alone. He takes inventory of his pockets and “found that beyond £75, four slabs of melting chocolate and a crumbling biscuit they were empty.”

His odd supply list and his dangerous surroundings might have broken a less audacious man. He did lose hope. “‘When hope had departed,’ he wrote, ‘fear had gone as well.’”

This is the story of a hero who, through this one courageous act, rallies an entire nation at a time when it’s losing a war fought on foreign soil. Rather than roll into a ball, he quotes a leader of the French Revolution, aloud, bolstering his own spirit: “Toujours de l’audace.”  Always more audacity.

Millard has no shortage of strengths as a writer, but particularly spectacular is her ability to make history and historical figures not only relatable, but absolutely relevant to contemporary readers.

Nonfiction – History
Hero of the Empire: The Boer War, a Daring Escape and the Making of Winston Churchill
by Candice Millard
Doubleday
Published September 20, 2016
ISBN: 978-0385535731

‘Nineveh’ Dives Into the Anthropocene Swamp