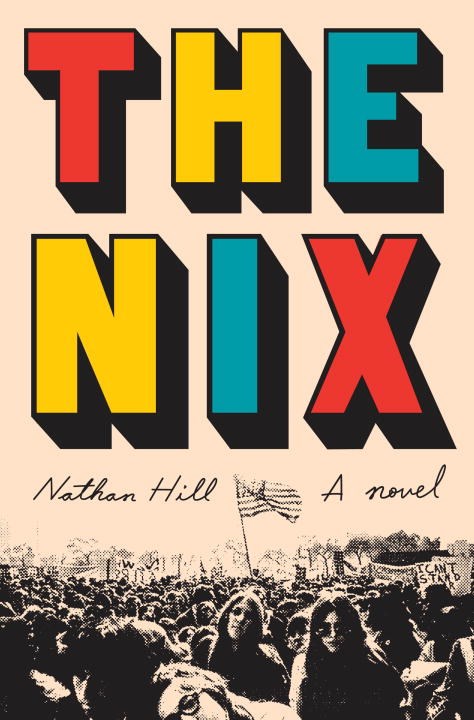 Since its release two months ago, Pokémon GO has popularized augment reality: the ability to experience the world through a virtual lens. In Nathan Hill’s debut novel The Nix, English professor Samuel Andreson-Anderson augments his own dull, anxiety-ridden existence by spending hours online playing World of Elfquest. But when his estranged mother reappears—making national headlines by attacking a political figure—Samuel is forced to face reality head-on and dig into his family’s past to discover the truth about his mother.

Much like Pokémon GO’s non-linear structure, Hill weaves his reader through both space and time as he transports us through modern-day Chicago suburbs to the cornfields of Iowa during the Vietnam War, from the fjords of Norway to bustling NYC, and back again to the 1968 riots during Chicago’s Democratic National Convention. Regardless of the myriad settings, Hill builds a vivid sense of place in each city, state, and country. His description of the Chicago freeway system, for example, perfectly evokes the Windy City’s corrupt congestion:

Despite his proximity, Samuel rarely goes into Chicago these days, and now he remembers why: The closer he gets to the city, the more the highway feel malicious and warlike—wild zigzagging drivers cutting people off, tailgating, honking horns, flashing their lights, all their private traumas now publicly enlarged.

The setting isn’t the only varied thing in The Nix. This novel is as chock-full of characters as a Pokedex. Leading the pack is Samuel and his mother Faye, but other important characters include Pwnage, an Elfquest master; Laura, a millennial student failing college; Bethany and Bishop Fall, childhood friends of Samuel’s; and corrupt cop-turned-judge Charles Brown. If that’s not enough, Allen Ginsberg and Walter Cronkite also make cameo appearances in the story.

But what makes this debut most unique is the abundance of Norwegian folklore—spirits, curses, and ghosts. In particular, a spirit called a “Nix” that tricks children into trusting something that’s too good to be true. Or as Samuel’s mother is convinced: the modern-day Nix is often a person, a loved one who someday will hurt you the most.

The connection to Pokémon GO notwithstanding, in a literary sense The Nix is most reminiscent of an entirely different phenomenon altogether—the 2014 Pulitzer Prize winning The Goldfinch by Donna Tartt.

For starters, both novels boast a staggering length of more than 600 pages. Second, the boyhood friendships portrayed are true-to-life and at times eerily similar to one another. But most of all, the storylines are ripe with traumatic childhood experiences and the aftermath of that trauma over the many years—and generations—to follow.

In The Goldfinch, the main character’s future is chained to a stolen painting, while in The Nix, Samuel’s destiny is bound to a ghost-like curse that followed his grandfather from Norway. That curse and the goldfinch painting alike prove more than mere plot devices; rather, they are the main theme. In Norwegian folklore, the nix merely wants the respect it deserves (don’t you dare spill water on its home). In art, the masterpiece requires the same care and affection (turn off the flash on that camera!). Simply put, both The Nix and The Goldfinch are stories about giving and receiving the proper amount of love and respect—regardless of whether for a person, a ghost or spirit, or a work of art. Too little love is a curse, sure. But, as explained in The Goldfinch, too much love isn’t ideal, either:

“Stay away from the ones you love too much. Those are the ones who will kill you.”

Despite the many similarities between the books, the best news is that The Nix isn’t ridden with the lazy clichés or overwritten passages that reviewers claimed spoiled The Goldfinch. (Though you may argue, depending on your stance on lofty sentences, as Hill does show off a bit during an eleven-page-long run-on sentence provoked by one of his character’s video-game-addled state of mind. I, for one, enjoyed the breathless, Ferrante-esque chapter.)

Clearly, The Goldfinch has spent its time in the spotlight. For now, Pokémon GO’s star is burning bright, but will likely dim in time. However, Hill’s star is just rising—and if The Nix is any indication, it will continue a steady climb in years to come.

Note for our Chicago-area readers: Nathan Hill has an upcoming event at the Book Cellar on September 15th at 7:00 PM.