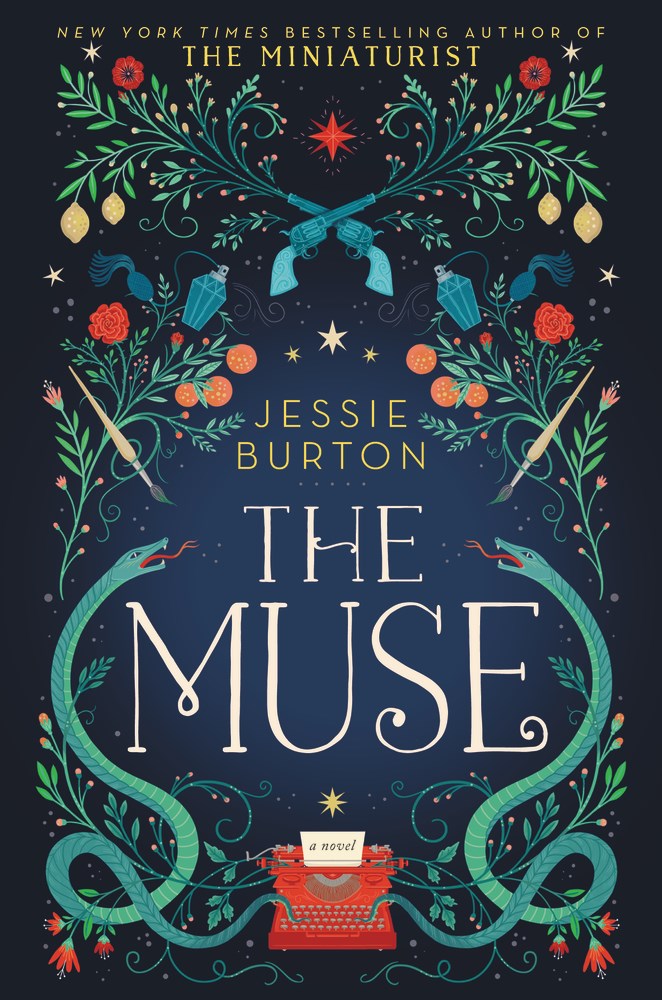 Agnes Martin, the late abstract artist known for her minimalist paintings, once said, “The worst thing you can think about when you’re working is yourself.” Artistic inspiration—the so-called muse—is often an artist’s greatest crutch, for better or for worse. Historical novelist Jessie Burton’s latest, The Muse, is a timely exploration of the relationship between art and artist.

Those familiar with Agnes Martin (whose work is on exhibition at the Los Angeles County Museum of Art through September 11) will know she experienced her own creative block after abandoning her celebrated grid-focused minimalist works of the 1960s. Martin moved from NYC to New Mexico in 1967 and made no art for six years. She later explained: “I left New York because every day I suddenly felt I wanted to die and it was connected with painting. It took me several years to find out that the cause was an overdeveloped sense of responsibility.” As it is with many, Martin herself was her own worst muse, her own artistic identity suppressing her art.

Isolated in the desert, away from the fame and criticisms of New York, Martin’s muse reemerged, along with the addition of color into her art and the modification of her grid-lined work to a horizontal focus. And this new style, built on solitude and hardship, produced masterpieces, many of which now sell for millions of dollars at auction.

Martin’s story is not new—society has long considered the benefits of separating art from the artist. For artists with negative reputations, this would allow for an appreciation of their art isolated from their status as terrible human beings (as in this article in Paste about Woody Allen). For others, this separation would allow for untainted criticism in viewing a piece of art without muddying the experience with the history of the creator—good, bad, or otherwise. Viewing Annie Hall is certainly a vastly altered undertaking without the knowledge of Allen’s sex abuse allegations.

But it’s certainly a topic worth re-exploring, and in Burton’s novel The Muse, two young artists grapple with this same idea, albeit in entirely different decades from one another. There’s Olive Schloss, a brilliant painter living in Spain with her parents during the country’s violent civil war in the 1930s. Then we have aspiring writer Odelle Bastien, a native Trinidadian living in London in the late 1960s. Their tales collide when an original painting by a famous Spanish artist turns up among a dead woman’s possessions—and the story behind the artwork and the artist is not exactly as it appears.

As inquisitive Odelle follows the clues about the mysterious painting, her mentor, Majorie Quick, pushes her to consider art—both Odelle’s own writing, and the painting—in a philosophical sense, saying:

When something is considered ‘good’, it draws people in, often resulting with the eventual destruction of the creator. I’ve seen it happen. So whether you think it’s ‘good’ or not should be entirely irrelevant, if you want to carry on.

This is an idea both Olive and Odelle struggle with, as making their own artwork public would mean stepping into mainstream examination—for Olive, as a female artist, and for Odelle, as an artist of color. Once the leap from creator to artist is taken, fame cannot be undone—no matter if it makes the subsequent art suffer. The Muse is not only a novel with a mystery unfolding stroke by stroke, but also a commentary on the effect of public scrutiny and unexpected fame in the artistic community.

Burton herself is no stranger to the topic. In 2014, she burst into the literary scene with her debut The Miniaturist, a historical novel set in 17th-century Amsterdam, selling more than a million copies. The book won 2014 book-of-the-year awards from Waterstones, National Book Awards, and The Observer, among other prizes and longlists. But in a poignant and brutally honest post on her website this past February, Burton unpacks the anxiety and doubt she felt as an artist—and a person—amid her astounding success:

“This is a key problem: the book and the writer of the book—what is the distance between the two? Which one is the wildly successful party in this? As an artist, I didn’t know how to position myself in relation to my book’s success.”

Surviving the End Days in “The Forests”

There’s no secret rule for artists about how to live up to fame and expectations, especially when the artist becomes synonymous with the work. Some thrive in the public eye (J.K. Rowling), while many are blinded by the limelight (Agnes Martin before her move to New Mexico).

But despite her artistic fears and doubts, Burton’s second novel is more bold and precise than her first. In evaluating The Muse—especially after reading her debut novel—it’s clear that Burton’s talents are now fully realized. She’s proven herself to be a seasoned a storyteller and wordsmith, easily moving between countries and decades, flawlessly mastering the character development that her first book arguably lacked. Her intuition as a writer is spot-on, with the parallel narratives of the book unfolding in a way both perfectly-timed and keenly executed.

Even while worrying about her role as a public artist, Burton has overcome her hardship and produced a stronger second novel, one that embodies the very fears and anxieties that had plagued her. Like Martin’s late paintings, The Muse is a more colorful experience, less rigid and more emotional.

In Burton’s confessional post, she never decides how best to position herself to the success of her art. One might look to Martin’s infamous line, “I paint with my back to the world,” for guidance. But reflection on Martin’s own life experience, paired with that of other successful artists like Burton, the advice might be better modified to instead: “I paint with my back to myself.”