The 10 Best Chicago Novels of the 21st Century So Far 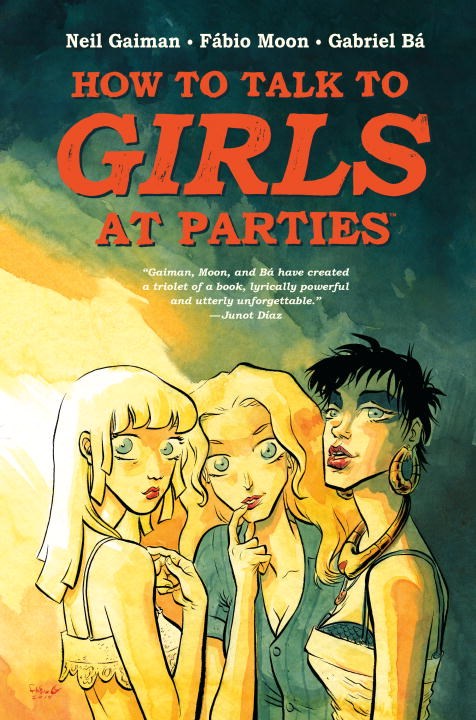 I first read Neil Gaiman’s “How to Talk to Girls at Parties” in his 2006 short story collection, Fragile Things. Fans of Gaiman will likely share my familiarity and appreciation for his work. He’s a fixture in many genres, including the world of graphic novels—and for good reason.

“Girls,” if you haven’t read it, is a simple story. Vic and Enn search for a rumored party. Vic is good with the ladies, while Enn thinks of them as alien creatures. The boys find a party, but it’s not the party they expected, and as Enn gets up the courage to talk to girls, he finds that they’re not all he expected either. The expected fabric of the story begins to unravel as these beautiful girls reveal themselves to be otherworldly.

Given Gaiman’s experience in the world of comics, this graphic novel adaptation, How to Talk to Girls at Parties, makes sense. Yet the story’s driving force is Enn’s monologue and the strength of Gaiman’s prose. All of the action takes place from Enn’s perspective, which begs the question: how does a short story with a limited point-of-view work when translated into a visual form?

The answer is, brilliantly. The glorious watercolors by Fábio Moon and Gabriel Bá set the mood, along with a stripped-down version of Gaiman’s prose as caption boxes to provide insight into Enn’s mind. The dialogue is naturally preserved, rendered in speech bubbles and at times spilling out into the block of the frame, twining with the illustrative flow of the music that plays through the party like smoke. The glow of Moon and Bá’s watercolors is ethereal, well-suited to the atmosphere of memory. “This party,” as Vic tells Enn, “is not the party that we thought it was.” And as the extremely foreign girls tell their tales to Enn, worlds and poems take shape in full-page swirls of color and line and form.

The girls themselves are ethereally rendered, wide-eyed and beautiful enough that the reader first buys them as really pretty girls, yet odd enough that their reveal as alien creatures is believable. My sole complaint with the artwork is that Vic and Enn look far older than mere teenagers. Enn describes some of the other lads at the party as looking older, but to me, they all look the same. I wondered if this was intentional, to give the reader some clue into Enn’s perceptiveness, but even so, I found it less effective.

The story itself isn’t for everyone. Despite reading the short story years ago, I couldn’t remember the ending of Girls, only the surprising reveal—and that’s because it doesn’t end as you’d expect it to. There’s no catastrophe. The party unravels, and with it, the linear story unravels, too. Vic and Enn take their hurried leave, as Enn muses on what he has seen, and what he now knows only in part about angry universes and doomed civilizations, and the life a poem can live and create.

Gaiman leaves much to the imagination. We don’t know why Enn is reliving this story, or who his audience is—but Enn will never forget the party, he says, and we believe it. Girls is an inciting incident, not the story in full. Something comes after this, and we are left only to guess at what that might be.

Whether you’ve read the original short story or not, before you see the upcoming movie adaptation, treat yourself to this lovely little graphic novel. The coloring and the art are out of this world, enough to give new life to Gaiman’s sci-fi tale.

The Sacredness of Queer Aunthood in “Stone Fruit”