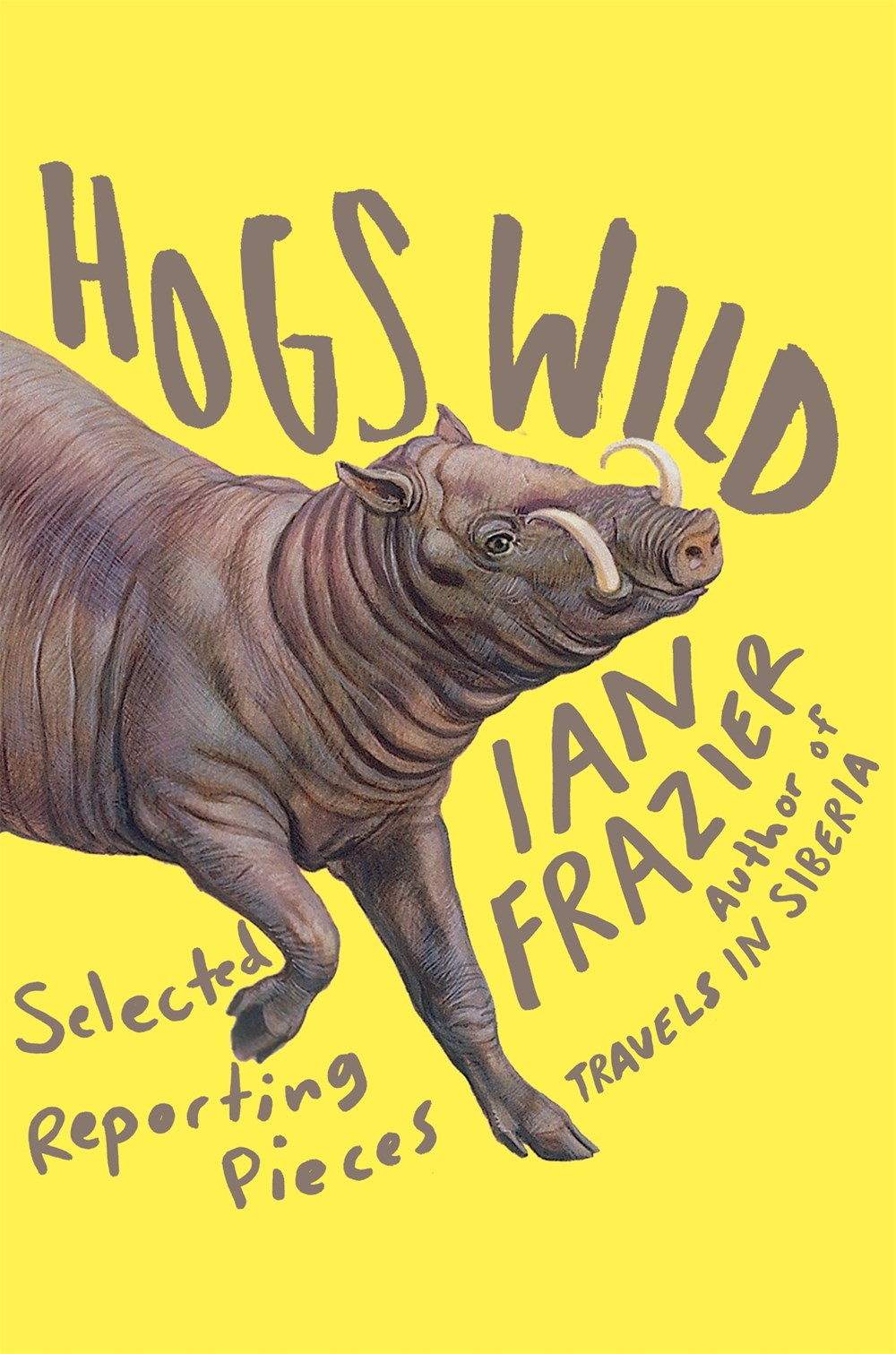 Isn’t it interesting to think that The New Yorker was once a pipe dream, teetering on the narrow arête between cultural import and collapse? In the summer of 1925, a prestigious editorial advisor requested that his name be removed from the magazine’s masthead. Funders discussed a final ad push in the fall, anticipating a quiet and polite termination by December. We all know how that went; The New Yorker is now a goliath, renowned for its thorough fact-checking and cultural commentary. According to Ian Frazier, the tipping point was an essay by Ms. Ellin Mackay—a funny and dismissive critique of Manhattan’s social scene.

Today Ian Frazier is a frequent contributor to The New Yorker and his account of the magazine’s beginning is a great example of why he has achieved such success. His 12th book, Hogs Wild, is a collection of Frazier’s reportage and a few personal essays that exemplify him as a traditional American humorist and essayist. Funny and informative, he has a knack for details, points of interest, and a meandering style that keeps you guessing.

For instance, Frazier’s New Yorker origin story starts with his own collegiate obsession with the magazine. He’s especially taken with the zippy social commentary of Ellin Mackay, whose Irish Catholic family disapproved of her affinity for the cabaret scene. Frazier tucks Mackay’s story in with that of her husband, the famous composer Irving Berlin. An immigrant and an unsanctioned suitor, Berlin was young, scrappy, and devoted to his wife until the very end. The unlikely couple, the weekly magazine, and Frazier’s eventual career with the press all wound up happily ever after. If that’s not an American fairy tale, I don’t know what is.

Yet most of the essays in Hogs Wild are not fairy tales. Instead, Frazier focuses on subjects such as organic alternatives to plastic, invasive species, and homelessness, the sort of things that informed Americans and New Yorkers aught to care about. This is, perhaps, why author and critic Jessa Crispin has dissed The New Yorker as “a dentist’s magazine.” Ian Frazier, too, is informative, entertaining, but also conventional, marching firmly in the footsteps of American humorists of the past. If you like Dave Barry’s pointed guffaws, the devoted research of Dave Eggers, and the ambling structure of Mark Twain, then you will like Ian Frazier.

The book’s title essay hits all three styles with a 20,000-word exposé on the infestation of wild pigs across America. Apparently, feral hogs are a real problem for real people. Frazier meets with the experts and goes slogging through the mud in search of a wild hog. He also interrupts his own introduction to the hog problem with: “’But what about this … Hog-zilla?!’ It’s a deeply resonant latter-day American name: HOGZILLA. I am going to deal with the Hogzilla question now, so it won’t be hanging over us.” Okay, so hogs are obscure, and thus funny, but Frazier’s interlude is the humor of Wedding Crashers rather than A Mighty Wind. It’s wry, and it’s painfully overt. This is America’s American humor and it’s not for everyone.

Now, I actually enjoy the dentist. I love the flotsam of a good, meandering essay and I laugh at American humor. Dave Barry was the first essayist I ever read and I remember being excited that one could write about important issues and also yuck it up. Such is life in America—a bucket of ice over your head somehow lives in the same diorama as a neurodegenerative disease. In Hogs Wild, Frazier observes that states with feral hog problems are also the states that voted for Bush over Kerry. In another essay, he follows the impact of a possible meteor that is sent to Rutgers University for examination. The scientists prove that the object is—disappointingly—not from space. The essay is 100% about the faux meteor, but Frazier slips in that 8 weeks after the meteor debunking, the university’s women’s basketball team will win national attention for both their NCAA championship and the racist remarks of a radio shock jock. He is a master of arranging the scene with just the right details to give a sense of the landscape—even beyond the scope of his essay.

Take for instance this beach scene in a piece about endangered seals in New Jersey:

On a higher part of the beach, a single patio chair of molded white plastic commanded a wide view […] I have seen this identical type of plastic chair in photos of the Lagos, Nigeria, city dumps in the Times. A photo of a memorial gathering for a slain Al Qaeda leader in Jordan showed a row of these same chairs in a tent. I own six of these chairs myself. I believe this type of white molded-plastic chair belongs to the growing category of the world’s ubiquitous objects.

Can’t you feel Frazier rubbing his stomach and throwing his shoulders back? Yet it’s a reminder that we live in a world where we must save the seals in New Jersey, fret about distant terrorists, and make dinner. I love that Frazier finds a way for all these disparate realities to live together; that is the work of a great essay.

Hogs Wild is informative on subjects that are inherently interesting—Charles Manson’s hideaway, the origin of the word “shrapnel,” and cops who are hip-hop experts, for instance. That is some good, American stuff. The one distraction is that Frazier is always in the scene, too. The New Yorker’s birth is painstakingly researched, and the story of Ellin Mackay is enchanting, but Frazier leads with his own story before bouncing around to the other lead characters and events. His hapless narrative path is Mark Twain-y, his pleasure in his own jokes is Mark Twain-y, and even Frazier’s list of publications, several of which are travelogues, is Mark Twain-y. What I’m trying to get at is that Frazier is enjoyable, understandably popular, but not ground-breaking.

I am due for a visit to the dentist. I should probably subscribe to The New Yorker, but it is no longer the edgy, new word in town. Not everyone liked Mark Twain, or Dave Barry, or American humor, but it turns out that I do.