Maryse Meijer’s ‘Heartbreaker’ Will Gnaw at Your Soul 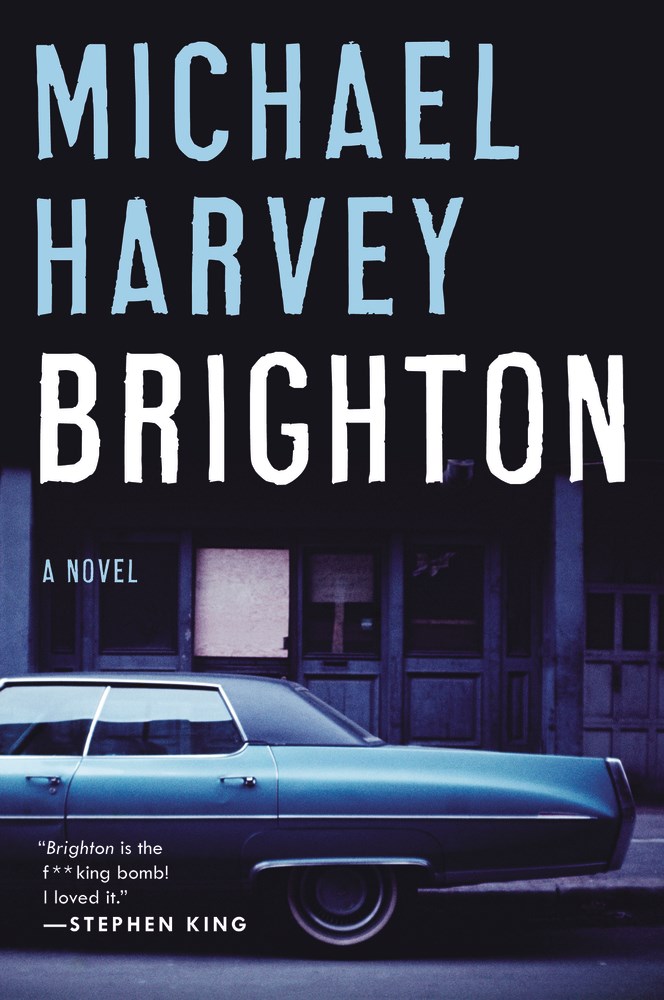 Michael Harvey is the well-regarded author of The Chicago Way, The Fifth Floor, The Third Rail, The Governor’s Wife and The Innocence Game—a real Chicago’s Chicago author. Except for one thing: he’s from Boston. Still, he’s doing Chicago, his current hometown, proud with his latest novel…which is set back in Boston. Follow that?

The release for Brighton has been, ahem, a wicked rippah, with movie rights sold ahead of publication and three of the major review publications giving him coveted starred reviews. Stephen King, though, gave the kind of review you have to use stars to blank out: “Brighton,” he said, “is the f***ing bomb.”

I recently spoke with Harvey about Boston, Chicago, and writing about place.

Lori Rader-Day: Brighton is getting such amazing reviews and press, that it feels like something is really happening for you. How is this book different from all your other (also well-received) books?

Brighton is a childhood book, set on the streets where I grew up. As such, it’s a more intimate undertaking than the Kelly books which typically deal with what I like to call “institutional crime”—crooked cops, sleazy politicians, city hall, the occasional Outfit guy. Brighton is all about that time in your life when you’re young and your character is first cast, your destiny written out in longhand while you plod along, just a kid blissfully unaware… until that moment when everything changes and you’re all too aware. And then nothing is ever the same again. In that sense, Brighton feels perhaps a little bit bigger. And definitely different.

As far as public reaction to Brighton, it’s only been out a couple of weeks, but so far, so good. We did a movie deal last summer with Graham King, producer of The Departed and The Town, which created a fair amount of buzz. Then we got some wonderful blurbs from writers like Chris Pavone, Ivy Pachoda and, of course, Stephen King and John Grisham. The pre-publicity reviews have also all been great. The readers will have the last word … which is as it should be.

Lori Rader-Day: Since you’re writing about a place you know so well, I’m curious about the ratio of memory to research to made-up-ness. How did you approach the project of trying to capture a place from the past that no longer exists?

Michael Harvey: Gabriel Garcia Marquez once said, and I’m paraphrasing here, your childhood is your childhood until it becomes something else, and for a writer, that something else is literature. What I think Marquez is talking about is the nature of memory, and especially childhood memories. We like to think we remember our childhood just as it happened. Sit down with a group of friends from the old neighborhood, however, and you’ll quickly discover you can’t seem to agree on anything! That’s because memory is far closer to a painting that it is a photograph, an approximation of reality that changes and evolves over time. As such, childhood memories are especially wonderful tools for a writer because they’re grounded in the physical world, while also pulling from our deepest subconscious.

All of this is a roundabout way of saying the neighborhood in Brighton, while it bears a more than superficial similarity to the real Brighton, exists in its own time and space, serving as a stage for my characters while also, hopefully, providing the necessary atmospherics and infrastructure for the narrative.

Lori Rader-Day: You’ve said elsewhere that Brighton was a place of racial and economic strife, and yet it didn’t seem “that bad.” Can you talk a little about what Brighton of the ’60s can tell us about Boston or even Chicago now?

Michael Harvey: I guess it’s sort of like living in Chicago, circa 2016. Forty plus shootings every weekend and ten to twenty homicides. Everyone’s appalled and yet, for people who live in the right neighborhood, the city is still a pretty spectacular place. Moral of the story—the world, at any given time, is a complicated place.

Boston in the 1970s was all of that. I attended Boston Latin School from the seventh grade through high school. My last three years were the first three years of forced busing in Boston. Latin School was (is) an exam school while still being part of the Boston public school system. I took a school bus across the city every day. If you did that, even if you were on the bus voluntarily, you saw some things. The epicenters for the busing protests were South Boston and Charlestown, but there was tension everywhere. Latin School was directly across the street from Boston English, a high school that, at the time, was mostly African American. There was constant skirmishing between the schools, a couple of larger confrontations in the street and a handful of Latin School kids who just dropped out in “solidarity” with the anti-busing movement.

Does all of that mean the school and the city were constant war zones? No. Compared to Chicago, circa 2016, hell no. But forced busing had an effect. And, in certain quarters, that effect was profound. As I thought about all of this in the present day, I increasingly felt the subtext of busing needed to be in the novel. It was a storyline that was real and unique to that moment. It would provide another anchor for the narrative and, most importantly, it would help to reveal and deepen character. At the end of the day, that’s what it’s all about.

Lori Rader-Day: Something about Brighton makes me think of Stephen King’s “The Body” (made into the movie Stand By Me) and Dennis Lehane’s Mystic River. What do you think Brighton‘s literary influences are?

Michael Harvey: Brighton’s biggest influences lie in the city’s past. Whether it be Bunker Hill and the Tea Party, local politics and politicians or its many sports teams, Bostonians know their history and love to relive it. The city closely identifies with what has come before and takes great (and understandable) pride in everything “Boston.” But it’s not just the city, writ large, that soaks in the past. The roots run much deeper. Each neighborhood has a history attached to it, each street within the neighborhood, each house on each street. They all have a past, a story that gets told and retold.

Again, this can be a good thing, creating a fierce identity and sense of belonging. And it can be a curse. A kid comes walking down the block. The other kids see him and one of them says, “Hey, aren’t you a Cunningham?” Kid says sure. Other kid says, “Your old man was a drunk (crook, coward, liar, cheater, insert your own phrase), his old man was a drunk and you’re gonna be a fucking drunk.” Kid is ashamed. Runs home. Or he fights. But either way, that’s probably gonna leave a mark.

It’s a small example, but telling. History can be both a blessing and a burden. But there’s one thing for sure. In the close quarters of a place like Boston, it’s gonna keep coming back for another bite. You see it in Lehane’s stuff, The Departed, Good Will Hunting, The Prince of Thieves (and the movie adaptation, The Town) etc., etc. It’s just how it is in Boston and there’s no escaping it. If you’re a writer, why would you want to?!

Lori Rader-Day: What advice do you have for aspiring writers who might want to write about the places they’re from?

Michael Harvey: I would say you need to have a certain distance from your past in order to write about it. I know some people who write about their childhood and the places where they grew up as a form of therapy. I’m not sure that would work so well, at least not for me. I think a writer needs to engage with her past while keeping a part of herself detached and observant so as to meet the needs of the characters, plot and overall narrative. In order to do that, the writer needs to have that appropriate measure of distance—not too far away that she can’t connect, but not so close that she loses perspective as a storyteller. If a writer gets too caught up in her own emotional wake, I suspect the work might suffer. Perhaps not, but that would be my fear.