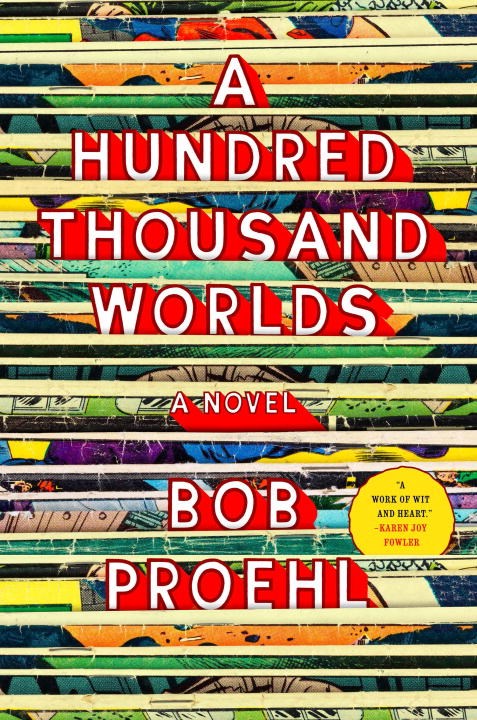 On a cross-country road trip with his mom—Valerie Torrey, star of the cult sci-fi hit Anomaly—nine-year-old Alex visits three different comic-cons in Cleveland, Chicago, and L.A. That’s the setup for Bob Proehl’s debut novel, A Hundred Thousand Worlds. What Alex doesn’t know: his mom is actually bringing him to meet his dad for the very first time, her co-star in Anomaly.

Proehl’s comic book savvy shines bright. Short, single-scene chapters with playful titles give the story a fun, popcorn vibe. Point-of-view shifts between chapters are seamless as Proehl sticks to third-person. Time moves between chapters like the space between panels in a comic book, and the three comic- cons divide the book into three sections: Golden Age, Silver Age, and Modern Age.

The plot is riddled with references to real-world comics. DC and Marvel are “National” and “Timely.” If you’re not already familiar with the comics industry, these references can be a little distracting, especially when he seems to splice together similar stories from history. Sometimes, it’s unclear whether he’s making a clever allusion or making stuff up. But the blurriness points to one of the book’s themes: that the relationship between fact and fiction is cyclical and co-dependent.

This dichotomy between the real and the imagined is everywhere in the book. Alex’s mother narrates old episodes of Anomaly for him at night, so Alex’s perception of his mother and father is colored by their characters on the show. In fact, the only way he knows his dad is from watching him on TV. And as Alex writes his own comic book story with about a boy and a robot, it contains many parallels to his own cross-country adventure.

Alex himself ruminates on this theme after Valerie finishes retelling an episode of Anomaly:

He thinks back on all the other stories she’s told him and wonders how many are real and how many are made up for him. It’s like the masks the superheroes wear that become more important than the faces under them: the story hides something so it can reveal the thing more clearly.

Alex realizes that watching an episode of Anomaly—free of his mother’s censoring and reshaping—would be a very different experience than hearing her version. But he also wonders what his mom’s stories reveal about her. A different piece of fiction gives him a different truth, filtered through the lens of his mom. At another point, Valerie asks a friends why some comic books set their stories in made-up cities, particularly when its correlation with a real city is so obvious: fictionalization allows for a certain kind of freedom.

“Why not use real cities?” Val asks.

“In the beginning I think it was because they wanted OuterMan to have a futuristic city to have adventures in. Metro City is New York, but it’s more like New York in Corbusier’s wet dreams. Highways spiraling through the air, tram cars on a web of invisible wires. Once your main city is fictional, it’s easier to stick with fictional cities, for the sake of consistency. There’s also the fact that comic book cities get blown up a lot. The past couple years, it’s nice not to have to be blowing up New York or Boston or Chicago. I mean, who wants to knock down the Empire State Building now?”

Ultimately, Proehl uses this motif to examine the nature of fandom, geekery, and storytelling itself. And the fictions that his characters obsess over aren’t just an escape, but also a means to understand reality … or even change it. Which makes A Hundred Thousand Worlds itself a heartwarming, thought-provoking piece of fiction.