‘A Hundred Thousand Worlds’ Celebrates the Wonders of Fiction 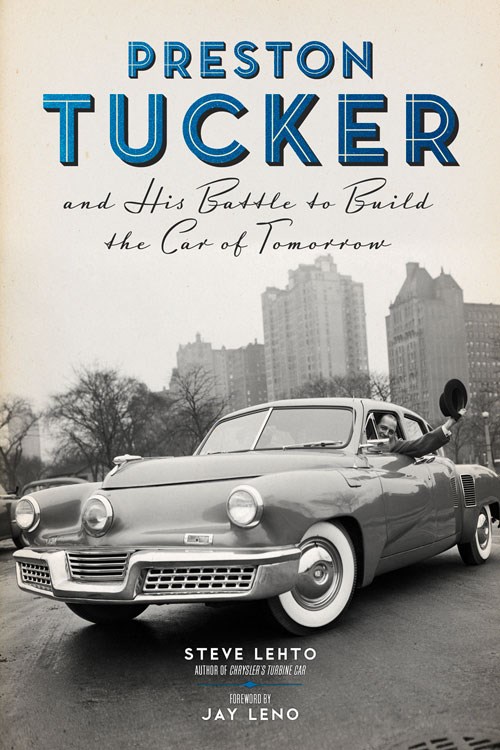 Visionary or villain? Huckster or victim of a government conspiracy?

These are the lingering questions author Steve Lehto tackles more than a half-century after Preston Tucker’s bid to build a revolutionary car for post-war Americans—and to make Chicago an auto-building capital to rival Detroit—ended in bankruptcy and recrimination.

His Tucker ’48 was touted as the streamlined car of the future, loaded with advanced features and sold at an affordable price. Producing it would have been a tall order for established carmakers. For an upstart like Tucker, it would prove to be impossible.

In Preston Tucker and His Battle to Build the Car of Tomorrow, Lehto separates the true story of Tucker’s rise and fall from the mythology that surrounds the car and its creator. The book’s dedication to Tucker “and every other person who has dared to launch a business in America” telegraphs his sympathy for an ambitious everyman who pursued his dream in the face of overwhelming odds.

Tucker was an ideas man, and his idea to build a car from scratch looked like a stroke of genius—on paper, at least. In 1942, just weeks after America entered World War II, Detroit stopped making cars for the civilian market and shifted production to tanks and military vehicles. When the war ended in 1945, assembly lines retooled to churn out updated versions of pre-war models.

Tucker saw an opportunity. He envisioned a new generation of aerodynamic cars unlike anything on the road, with the engine in the rear, a cyclops-like third headlight mounted in the middle of the front hood, and cutting-edge features such as hydraulic disc brakes.

His credentials for the task of shaking up the auto industry were questionable. Tucker was a Michigan-born former policeman who sold cars, hung around pit row at the Indianapolis 500 and worked on high-performance racing cars. He tinkered with weapon designs during the war, but the military rejected his blueprints for an armored car and an aircraft gun-turret.

As a promoter, though, he had few equals. A designer who worked on the Tucker ’48 remembered him as “the archetypal salesman who could not only sell refrigerators to Eskimos, but also have them liking the refrigerators after the purchase.”

Tucker leased a surplus aircraft-engine factory on South Cicero Avenue and set to work. With a sprawling factory, a workforce of 1,500 and a nation-wide network of dealers and distributors, the Tucker Corporation seemed poised for success.

But reality never kept pace with the hype. A prototype unveiled with great fanfare in June 1947—affectionately (and accurately) christened The Tin Goose—barely ran and had been cobbled together, using parts salvaged from a junked Oldsmobile.

It was little wonder federal regulators stepped in, alleging Tucker issued false and misleading statements to shareholders. A Securities and Exchange Commission investigation led to a prosecution on criminal charges. Tucker and his executives were acquitted but the trial and negative publicity ruined his reputation.

Lehto’s passion for his subject shines through—one of his previous books explored a turbine car produced by Chrysler—and he provides a balanced assessment of a polarizing figure. It’s clear the SEC investigation was flawed and vindictive, and there’s smoking-gun evidence a Michigan senator instigated the probe to protect the big Detroit automakers. But, the author concedes, Tucker’s brash style and inflated claims made him an easy target.

Tucker was his own worst enemy. He promised far more than he could deliver. One of his close associates had a criminal record for embezzlement. Some dubious financial transactions and stock transfers raised red flags, and the sale of accessories for cars not yet built bordered on a Ponzi scheme.

The Echoes of Artifacts in “All That She Carried”

Comedian Jay Leno, a collector of classic cars, states the obvious in his foreword to the book: Tucker “was a better car salesman than he was an engineer.” In the end, 51 Tuckers were produced, including some assembled from parts after the company failed. Forty-seven survive, and these rare bits of auto history now fetch seven figures at auction.

This is not just a book for automobile buffs; there’s enough insight and intrigue to appeal to a wider audience. Many readers will know the basic story from the 1988 Francis Ford Coppola movie, Tucker: The Man and His Dream, starring Jeff Bridges as the carmaker.

Would Tucker have prevailed without government interference? Not even Lehto’s extensive research can offer a definitive answer. “Tucker dared to compete in the highest levels of American business,” he concludes, “and he came tantalizingly close to succeeding.” But in business, it takes more than a good idea to win the battle.