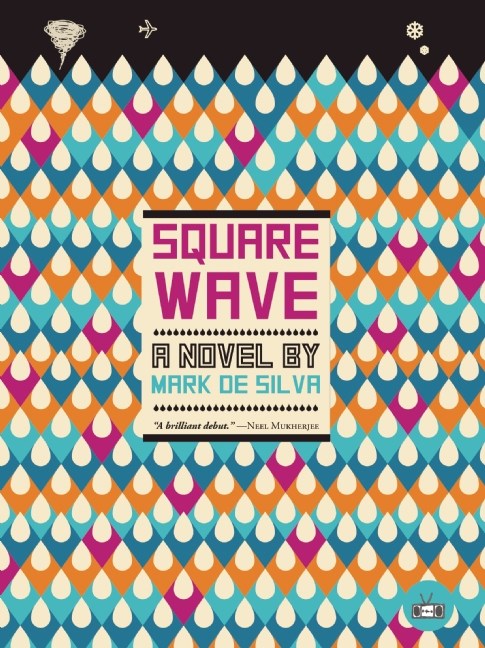 The first time I tried to read Mark de Silva’s debut novel—on the CTA, of course—I put it down after a few pages. Perhaps the bus was too loud, I thought. But later in the quiet of my own home, despite the brilliant cover, the author’s New York Times pedigree, and the irrestible premise, I was stumped by the first few chapters of Square Wave. Desperate for a narrative toehold, I kept reading more out of respect than desire.

And then something changed. Deeper into de Silva’s labyrinth, I realized my state of confusion was a deliberate effect. That counter to everything I’d learned about writing in graduate school, he was intentionally placing obstacle after epistemological obstacle in my path. And when I finally glimpsed a tapestry where before I had only seen stray threads, I realized just how impressive and unique a reading experience Square Wave is, despite its demands.

Mark de Silva holds a PhD in philosophy from Cambridge University and spent several years on the editorial staff of the New York Times. His first novel is about a lot of things: a near-future American dystopia, 17th-century Sri Lanka, cloud-seeding technology, and microtunal music, for starters. I recently spoke with de Silva about his writing process, “opaque and disorienting” prose, and Square Wave‘s early inspirations. This Wednesday (6.29), he’s reading from the book at Vica Miller’s Summer Fiction Salon on the Upper West Side of Manhattan.

Adam Morgan: For many writers, a book begins as a single image, line, character, idea, or scene. What did Square Wave begin as for you?

Mark de Silva: I started with the idea of comparing struggling states, distant from each other in time and space, but united by imperial ambitions, specifically, Britain’s. Ultimately those states turned out to be a near-future America and a nascent colonial Sri Lanka.

Each of the things you mention, though, had its own first, and all of them mattered to the final form of the book. The first character I glimpsed was the protagonist, a historian of sorts (a genealogist, really) who acts as the story’s nexus between the past and the future. The first image/scene that arrived—it’s now chapter three in the book—was of him and his girlfriend watching an experimental musician (her ex) perform in a bar. The circumstance is really quite classical, dramatically: a man competing with another man for a woman’s attention. The first line that occurred to me, which reflects the protagonist’s point of view, touches on this: “The music quieted for a moment, but given the circumstances, her voice could only be remote.” I started pulling on that line, and now, several years later, there’s a book.

Adam Morgan: One of the most impressive things about Square Wave is its structure. Were you inspired by any other fictional works (Aronofsky’s The Fountain comes to mind), or did the architecture happen organically?

Mark de Silva: In the initial drafting, my imagination kept drawing in new topics: history, music, physics, politics, prostitution, academe. Some of the structure seemed to take care of itself, but plenty of it involved figuring out, during and after the drafting, how to weave these threads into pregnantly patterned cloth. I never ended up turning to other artworks for inspiration, only because these structural answers turned out to be latent in the material itself. There was no need to look elsewhere—only to look closely.

I think the book’s architecture is of a level of intricacy that, for most readers, it will be “more felt than grasped,” a phrase I use within the book to characterize a certain kind of avant-garde music. Several readers have told me they felt a persistent sense of unity to Square Wave in reading it, though they felt unable to articulate it in any real detail, given how heterogeneous the material is. I think books that do that can push your mind, as a reader, into places of great fertility, even if they are also a bit vexing.

Adam Morgan: Are you a discovery writer or a planner?

Mark de Silva: I can’t possibly write a true mess of a first draft, as I understand many writers do. It sounds too dispiriting. But I also don’t think I can plan out a novel (or an essay) much past the start. I do typically know many of the things I want to explore in the work; sometimes I’ll just list these things on index cards or a piece of paper. Obviously this isn’t much of a plan, but what separates me from a true discovery writer is that I will continually come back to this little list during the writing, reshuffling things, discarding things, adding things, until a more developed structure emerges. By the time I finish the first draft, it’s reasonably clean, because I have actually done a lot planning and revising along the way. It’s just that I didn’t do it before the writing, like a true planner, but in the midst of it.

Adam Morgan: Many MFA programs teach student writers to “remove all obstacles” for the reader, to write as simply and clearly as possible. Judging from Square Wave and some of your interviews, you’re in a different camp. What would you say to these same MFA students?

Mark de Silva: There are vital and original artistic visions that can only be rendered in a direct prose style. Kafka’s and Hemingway’s books simply cannot be recast in the language of Malcolm Lowry. The reverse is also true. There is no limpid Under the Volcano. Its intricacies and opacities are essential to its particular way of organizing the world. There is also, I believe, no limpid Square Wave. Lowry’s style is distant from my own—you could never mistake one for the other—but neither of us has anything against the disorienting or the recondite. In fact, I think the most profound of our experiences frequently have just these qualities to them.

Adam Morgan: How did your time on the editorial staff at the New York Times influence you as a fiction writer?

Mark de Silva: It’s helped sharpen my sense of the axioms governing journalistic writing: the precise ways in which a Times story meshes (or fails to) with our readership’s expectations, and the ways in which, as an editor, making tiny shifts of structure or tone or angle can transform a piece from predictable red meat into something that can productively surprise our readers, even challenge them a little.