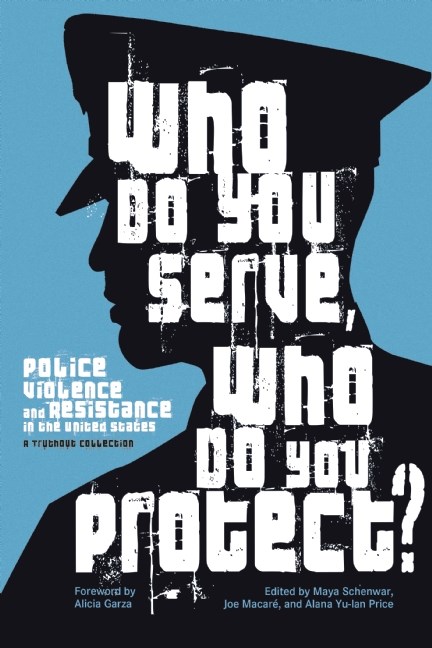 Would some communities be safer without police? That’s the question at the heart of Who Do You Serve, Who Do You Protect?, a collection of essays and reportage penned by some of Truthout’s most compelling and enlightened thinkers—including #BlackLivesMatter co-founder Alicia Garza. With heartbreaking, glass-sharp prose, the book catalogs the abuse and destruction of black, native, and trans bodies. And then, most importantly, it offers real-world solutions.

While media attention and street protests have become increasingly common—particularly here in Chicago—justice has not. Faced with a system designed to protect police and demonize minorities, the authors of Who Do You Serve ask if the time has come to replace traditional police forces with “alternative ways of fostering safety in our communities.”

Numbers only tell part of the story, but there are plenty of statistics here. In the first chapter, Nicholas Powers interviews a grieving mother about the loss of her son to police violence and how it broke her family. Other chapters resemble 2666‘s “The Part About the Crimes,” exhaustively listing instances of police getting away with murder and torture. The stories here rival those of longer-form texts like Slavery by Another Name and The New Jim Crow, comparing the current situation to the plight of African-Americans during slavery and Reconstruction.

After establishing the problem, the following essays offer solutions. To stop the deaths of people of color at the hands of police, Rachel Herzing and Candice Bernd suggest alternatives like The Harm Free Zone and CAHOOTS, which train community members to be first responders and intervene in some situations instead of the police. Other chapters call for knowledge-sharing between communities with a shared history of abuse (such as Black and Native peoples) and how combining resources can further empower groups against police injustice.

One thing is clear: the issue is not limited to a few bad apples. It’s a systematic problem that won’t disappear without major policy changes.

Making incremental changes to the systems, institutions and practices that maintain systemic oppression and deferentially target marginalized communities is essential to shifting power. Taking aim at specific problems and demanding change helps build power among repressed communities in ways that are more lasting and sustainable. Without a strategic long-term vision for change, however, today’s reforms may be tomorrow’s tools of repression.

One of the great things about Who Do You Serve is that it doesn’t limit itself to white police officers and black victims, because the problem is obviously much more complex and far-reaching. Pregnant women, native peoples, and transgender individuals are often victims as well. Further, the authors don’t just rage against the system. They offer potential solutions. Instead of armchair politics, the book is a call to action: “Going forward, our charge is not only to protest the killings, demand policy changes and call for accountability, but also to nurture values and structures that will truly produce safety for all of us.”