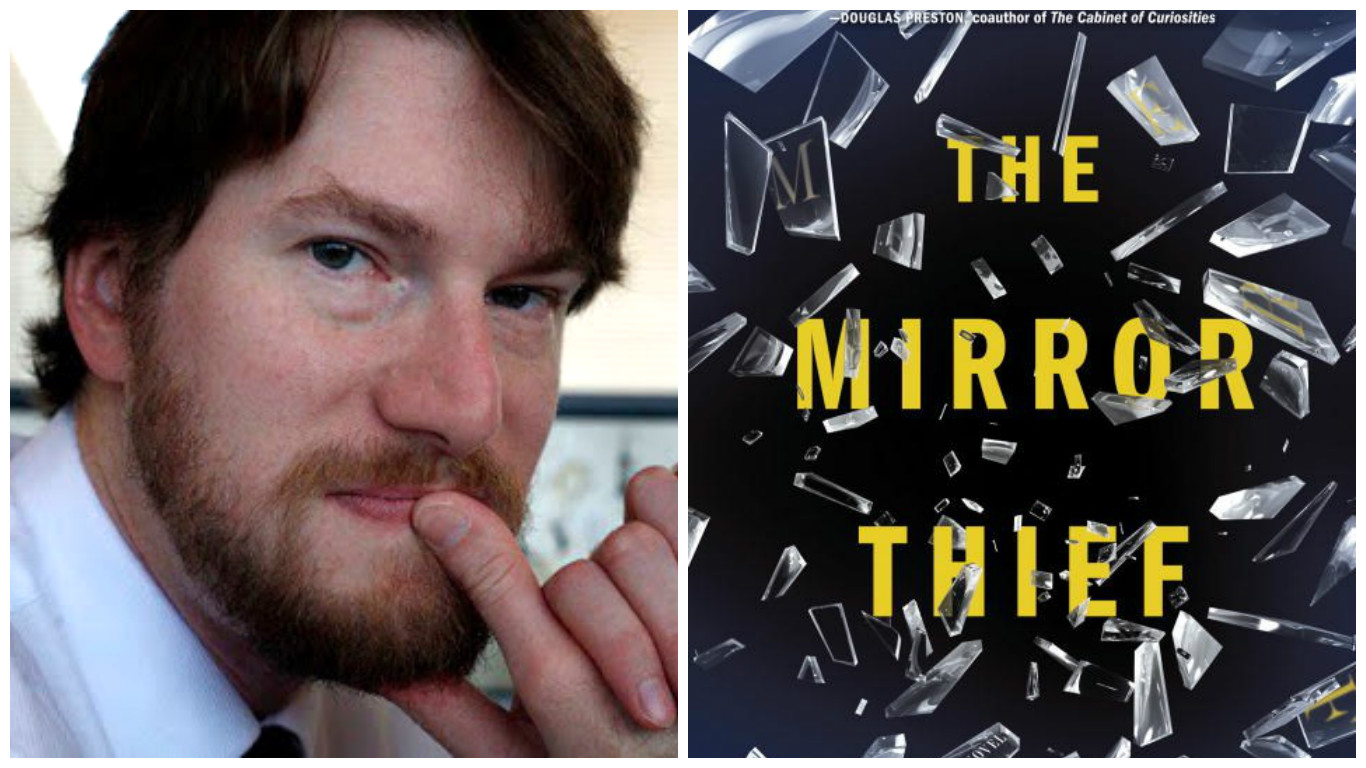 The weirdest and most ambitious novel of 2016 thus far, The Mirror Thief, was written by the Executive Secretary of Wheeling, Illinois—a Chicago suburb about 30 miles northwest of downtown. Martin Seay’s 600-page debut is a literary, speculative, mystical masterwork set in three different versions of Venice (Italy, California, and Las Vegas) during three different time periods (16th century, mid-20th, early 21st). “How this book got published is a complete mystery to me,” said Scarlett Thomas in the New York Times, “Not because it is not good enough, but rather because it is too good.”

On June 12, Printers Row Lit Fest hosted a panel on debut fiction with Seay and three other Chicago authors: Kim Brooks, Deborah Shaprio, and Billy Lombardo. Here is an edited, abridged transcript of Lombardo and Seay talking about The Mirror Thief. (We’ll run the Shapiro and Brooks conversations soon.)

Martin Seay: I was taking a class called Experimental Fiction from a guy named Richard Peabody when I was at Johns Hopkins. He had us write nine stories over the course of a regular semester—which is approximately seven more than is typical—and all of them had to be written to these crazy prompts. He would tell you: “Go home and write me a story in which you are the character, but there’s also a character from another work of literature, and a cartoon character, and make it between 12 and 15 pages.”

The assignment you’re talking about was to write a story in which someone tells a story. In order for that to work, there’s got to be some temporal displacement. At that point, I was like: “Okay, three different times and places. I’ve always wanted to write something about Venice, so maybe I’ll do Venice.”

I learned that the Venetians had a 200-year monopoly from about 1500 to 1700 on the manufacture of flat glass mirrors. There have been mirrors forever, but they figured out how to make them flat, so you could see yourself the way people really see you, and you could rehearse your public persona in a way that you would haven’t been able to do before.

So then I thought: “Okay, it’ll be about mirrors, maybe I’ll just do fake Venices, other Venices.” That’s what got me started. It wound up not being 12 to 15 pages. It’s a little longer than that.

Billy Lombardo: Who were these Venetian mirror craftsmen?

Martin Seay: If you were a mirror maker in Venice circa 1600, you did really well. You made a ton of money. They were in extremely high demand all over Europe, but if a mirror maker set foot outside of the territories of the Republic, you would be dead within a matter of weeks. Venetians did not allow that technology to travel. That’s how they maintained their monopoly. They were ruthless about making sure the technology didn’t find its way to another foreign power. If you can’t write a novel about industrial espionage in 1600, you probably can’t write a novel.

Billy Lombardo: Can you talk a little about observing other people to give yourself a capacity for their kind of writing?

Martin Seay: Characters are the last thing that showed up for me. I started with three time periods and three settings. Those lead to scenes. Then I came up with a story that would connect the scenes. Then I figured out who would walk through that story. The characters were also the thing I spent the most time on. I stopped working on the book for a couple of years and spent a lot of time thinking about who these people were, what their backs stories were.

There’s a writing instructor who said that there are two kinds of writers: writers who hear voices and writers who play God. Some writers just hear someone talking, but I’m not that kind of writer. I’m a God-playing writer.

Billy Lombardo: What is the writer’s life like for you? How do you sit down and do it? How do you manage it with the rest of your life?

Martin Seay: I’m fortunate that I’m married to Kathleen Rooney, another Chicago-area writer and who has written a bunch of books. There are a lot of things I know because I saw her go through them. And this is not going to surprise anybody, but when you spend all day hanging out with imaginary people, you get weird. So it’s helpful that we both understand that. I may get a little weirder than she does.

As far as process goes, I tend to be a binge writer. I’ll have a few weeks where I write for twelve hours a day, and then long stretches where I don’t. Probably the best thing aspiring writers can do is form good habits and regular routines. I haven’t done that, so I don’t advocate my methods.

Martin Seay: To me, “experimental” generally means there’s an unorthodox component. My professor tried to push us in some odd content directions. He wanted us to try things we weren’t used to doing. My novel, if you read 20 pages of it, I think it probably feels a lot like a literary thriller. From page to page, it’s fairly conventional. But as you start to read more, it get a little weirder in the ways things are fitting together.

If you want to start thinking about the book in weirder ways … who is speaking? It seems to be in the close third-person, but is it? Why is it in the tense that it’s in? Why isn’t the dialogue in quotation marks? I hope you find interesting answers to that stuff.

Audience Member 2: I’m a writer, and what I struggle with is promoting, because writing these days requires so much self-promotion and social media. When do you find time to do that?

Martin Seay: I tend not to do both at the same time. I haven’t done a ton of fiction writing while the process of getting The Mirror Thief into the world happened, which is why I’ve recently diminished myself so I can get back to it from an appointment perspective. It’s unfortunate that took me five-and-a-half-years to write the book and seven years to find a publisher. If you’re a first-time novelist I recommend going a little shorter than 700 manuscript pages if you can. That will make things a lot easier for you.

Ultimately, I think most people want to see if the manuscript works or not. The platforms certainly don’t hurt, but in my experience it’s really the manuscript people are interested in. Now, because I have a publisher who has a publicity person, the publicity person is doing like 99% of the work on this and that’s great. The other 1% is such a privilege to do. There’s a concept that you all have probably heard, “Literary Citizenship”: if you’re in a place where there are writers, participate in that community and do it in a way that feels natural and organic. If your connections with other people are going to pay off, it’ll be for something really organic—just someone you like to have coffee with—more than it would be any sort of conscious networking that you’ve done.