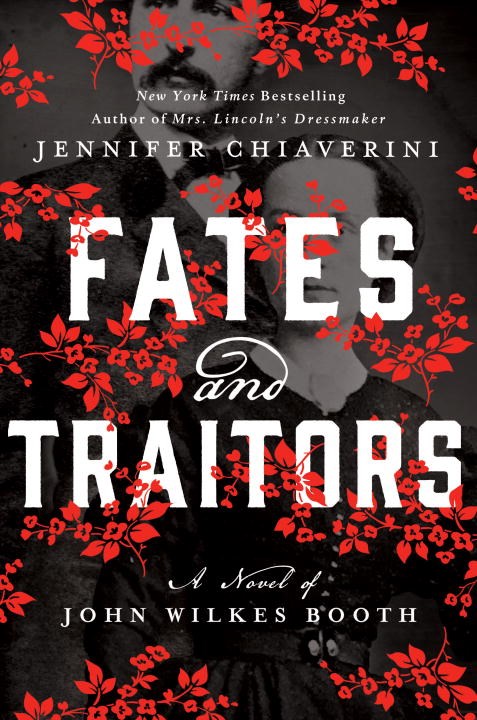 Last week, the Broadway hip-hop musical “Hamilton” made headlines yet again after the show was nominated for a record 16 Tony Awards in a wide range of categories: acting, design, directing, and more. In case you’ve been living under a rock for the past year, the musical revives American founding father Alexander Hamilton, a misunderstood historical character, and includes a number of characters who’ve previously been on the periphery of history—namely, Hamilton’s wife and sister-in-law.

But spotlighting little-known historical characters is not a new model for prolific author Jennifer Chiaverini. Widely known for her Elm Creek Quilts series, most recently she’s released several historical novels about First Lady Mary Todd Lincoln, one about First Lady Julia Grant, and forthcoming in September is Fates and Traitors: A Novel of John Wilkes Booth, the story of the infamous assassin and the women who loved him.

This week, Jennifer Chiaverini is in Chicago for BEA (Book Expo America), North America’s largest gathering of book industry professionals from around the globe. Chiaverini is one of more than 500 participating in an author signing for an upcoming or recently-released book, in addition to the many panels and speaker events scheduled during the four-day convention. The Chicago Review of Books spoke with Chiaverini about breathing new life into forgotten historical figures, of her time living in Chicago, and, of course, “Hamilton” the musical.

Your list of published books—34 in total—is incredibly impressive, and continues to grow. Most recently, it seems you’ve been spending your time writing fiction based on real-life historical characters. In particular, two are centered on the wives of American presidents Lincoln and Grant. In your forthcoming book, Fates and Traitors: A Novel of John Wilkes Booth, you focus on the four women who love a completely different sort of man: Lincoln’s assassin, John Wilkes Booth. What has it been like to transition from writing about well-loved characters to one that was despised by so many?

It wasn’t as difficult as you might think, perhaps because Julia Grant and Mary Lincoln weren’t then—and aren’t today—universally well-loved. Certainly Julia Grant was widely admired as First Lady, but when I wrote Mrs. Grant and Madame Jule, I struggled to reconcile her celebrated generosity, piety, and kindness with the harsh truth that she found it perfectly acceptable to enslave other human beings. As for Mary Lincoln, despite the vast amount of historical and psychological research devoted to her, she remains an enigma. She was the first wife of a United States president to be called First Lady, and she was then and remains to this day one of the most controversial. Regrettably, descriptions of her tend to fall into the extremes of caricature: She is either portrayed as an unstable, shrill, vicious, corrupt shrew who made President Lincoln utterly miserable, or as a devoted wife, loving mother, and brilliant political partner whose reputation was savaged by biased male historians. In her own day she was often savaged in the press and among the Washington social elite, and unfairly, I think, many people hated her as much as they came to hate John Wilkes Booth.

Something else to keep in mind is that my four narrators—Mary Ann, Booth’s mother; Asia, his sister; Lucy, his sweetheart; and Mary, his fellow Confederate—all loved him, each in her own way. Since their perceptions shaped how he appeared as a fictional character, for most of the novel I was writing about John the beloved son, the favorite brother, the alluring lover, and the inspiring comrade. Only later did John Wilkes Booth, the infamous assassin, take the stage.

Prior to Booth’s traitorous act, he was a well-known actor and heartthrob. What modern-day celebrity would you best compare John Wilkes Booth to, and why?

I wouldn’t compare anyone to John Wilkes Booth—not out loud, anyway—because I can’t imagine any modern-day celebrity would appreciate being compared to a mediocre actor who became the most hated man in America! Reviews of Booth’s acting were mixed at best. Some critics thought he showed promise, though he couldn’t compare to his extraordinarily gifted elder brother Edwin. Others disparaged him as a bit player who got by on the strength of his good looks and celebrated family name.

You can see why I’m reluctant to single out anyone—so let’s have your readers do it instead. They need to find a very handsome but not particularly renowned actor, the son of a legendary and revered performer, the overshadowed younger brother of a wildly popular, admired, and successful star. Add some unpopular political opinions and a penchant for promiscuity and you’ll have your man.

The recent popularity of the Broadway musical “Hamilton” means that people are buzzing about the lesser-known or scandalized figures in American history. Have you experienced the show or soundtrack? How do you feel about your own story of a group of people “lost to history” being published in the wake of Alexander Hamilton’s recent re-invention?

I haven’t seen “Hamilton” yet, but I’m determined to get tickets when the touring production comes to Chicago this fall. As a rule, I don’t listen to soundtracks before I see a musical because I want to avoid spoilers, but I admit that in this case, the temptation is definitely testing my willpower.

For me, one of the great joys of writing historical fiction is the opportunity to bring little-known or forgotten historical figures to the forefront of the story. Women and people of color, especially, have too often been relegated to the margins and footnotes, if they make it into the historical narrative at all. I love introducing readers to these courageous, extraordinary people—people like Elizabeth Keckley, Mrs. Lincoln’s Dressmaker, or Elizabeth Van Lew, The Spymistress, and so many others—and allowing readers to witness transformative events in our nation’s history through their eyes.

The next step, of course, would be for one of my historical novels to become a smash hit Broadway musical. Anyone who can get Fates and Traitors into the hands of Lin-Manuel Miranda will have my everlasting gratitude.

I understand you’re working on a new novel about Ada Byron King, Countess of Lovelace. What is that book about, and what inspired it?

I usually discover the idea for one novel while researching and writing another, but I owe the inspiration for Enchantress of Numbers to my husband. I had heard of Ada Lovelace before, but I knew little about her other than that she was the daughter of the renowned poet Lord Byron and was credited with writing the first computer program long before the first computer was ever built.

One day last year, when I had finished the  revisions for Fates and Traitors and was half-heartedly researching a subject whose early promise, I had recently realized, probably wasn’t going to bear fruit, my husband tried to distract me by telling me about an intriguing themed set he had discovered on the Lego Ideas website: Ada Lovelace, Charles Babbage, and his Difference Engine, the early computer Babbage envisioned and she understood better than anyone. As Marty told me what he had learned about their history, my fascination and excitement grew. “You know what this is, right?” I said. “This is my new novel.”

Marty was surprised—he had only meant to tell me about a cool thing he found on the internet that he knew would appeal both to my love of history and my inner computer geek—but he was very happy to have solved the problem that had been making me so worried and stressed. If nothing else, this story proves that authors really do find ideas for novels just about anywhere.

According to your bio, you hold a degree from the University of Chicago. Tell us about your time living in the Windy City and what role, if any, it played on your writing.

After graduating from the University of Notre Dame, I attended the University of Chicago and received an M.A. in English Languages and Literature. My original plan was to pursue a Ph. D. and find a nice tenure-track position at a prestigious university somewhere, but I eventually realized that I couldn’t divide my time, energy, and focus between two such demanding careers if I wanted to do either of them well. I loved writing fiction and I had wanted to be a novelist ever since I learned how to read, so that was the path I chose.

When I look back, I believe three classes in particular that I took at the University of Chicago shaped my writing. The first two, British Gothic Fiction and Nineteenth Century Women Novelists, piqued my interest in an era that, as my recent novels attest, I’ve found very rich in storytelling potential in the years that followed. The third, Contemporary Historical Fiction, helped me to better understand the genre as a writer, especially given that I had always loved historical fiction as a reader.

My experiences with living in Chicago and attending the University also inspired me to use the city as a setting in two of my novels. In Mrs. Lincoln’s Dressmaker, I wrote about Mary Todd Lincoln’s time in Chicago after she left the White House in the aftermath of President Lincoln’s assassination. A character in one of my earlier contemporary novels, Winding Ways, was a University of Chicago graduate student, so I indulged myself by writing about some of my favorite places on campus and around Hyde Park. The Seminary Co-op Bookstore and my ground-floor apartment near 58th and Blackstone both make cameo appearances.

Are there any historical Chicago figures—little known or otherwise—you’d like to write about in the future?

Although I don’t plan to do so in the immediate future, Chicago has such a rich, fascinating history, with generations of intriguing—and sometimes notorious—people who would make wonderfully compelling fictional characters. I’d be surprised if I didn’t draw from that source before long.

Note for our Chicago readers: Attending BEA this week? Jennifer Chiaverini will be signing books on Thursday at 10:00 AM.