Chicago’s Alternative to “MFA vs NYC” 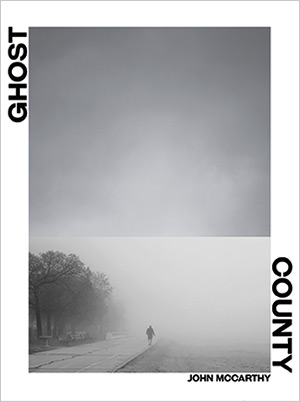 A love letter to the Midwest, John McCarthy’s debut collection of poetry Ghost County is the only book this year I’ve finished in one sitting. McCarthy, who lives in southern Illinois, paints a familiar, blue-collar picture of the Midwest but with a dose of surrealism that enlivens the region and gives it dynamic force in his storytelling.

I recently spoke with McCarthy about publishing his first book, pushing past Midwestern stereotypes, and the power of memory.

Which section of Ghost County did you find most challenging to write?

“Pickup Truck” was the most challenging. It’s all autobiographical more or less. It’s also why “Pickup Truck” fluctuates between first and second person. I don’t think I’m using second person as a deflection, but I am addressing someone, or at least the traces that people leave behind when they exit from your life. That address is a manifestation of intentions and feelings that were never given volume. I know some writers feel very strongly about sentimentality in poetry, but I don’t mind risking it a little, which is also why I feel so vulnerable in that section. But most people—especially when we’re in meaningful relationships—become sentimental in one way or another. I don’t mind trying to frame those instances. I think there is a way to capture and elevate our sentimental tendencies and turn them into poetry. Hyperbole is also present in that section and another thing that was difficult to put down. When we feel things on such a deep level, we have a tendency to exaggerate ourselves in an attempt to convey those meanings. At least I do. I get pretty loud sometimes, and I didn’t want to hide that sometimes annoying characteristic of mine. Ultimately, “Pickup Truck” is a portrait of who I used to be on many levels, good and bad. And I think portraying yourself and your relationships honestly is always going to be challenging. It’s hard to look in the mirror for that long.

In “Pickup Truck,” you often reuse but also rework small phrases or details in a way that stands out among the book’s other sections. Was that in the DNA of this section from the outset? Something that occurred spontaneously while writing?

If I have to give a straight answer—it was something that occurred spontaneously. I didn’t sit down and intend to do it, but I think of myself as an intuitive poet—and I really don’t know if I’m correct in saying that about myself—but I think I am.

The more complex answer is more derivative of my real life. I do see congruity and repetition daily. Sometimes I’m not sure if it has any import and some days I am entirely convinced that it means something. These tessellations and constellations. And for me, since poetry is an echo of those invisible areas, I often find myself constellating images, trying to rework them into different contexts, so that the image itself takes on a new life and so that it’s second use adds another layer to the image within the newly presented context. I think this also goes back to time, too. It is obvious that time changes what things mean to us, so the constellating and echoing of certain images and phrases is there to show how our emotions change over time, but continue to accumulate new layers and become more complex.

Your book creates a vivid and meticulously detailed portrait of the Midwest. How does place inform and interact with the emotional arcs in these poems?

That’s very kind of you. Thank you. I love the Midwest. I think my work will always be influenced by the Midwest. I feel like the openness of the region lends itself to contemplation. I don’t derive much joy or inspiration from big cities or from being near water like a lot of people do. I know that sounds like a silly thing to say, but I like the ground and I like open uninterrupted space. I like my physicality to be very grounded. My own mind is never grounded, so I assume that’s why I like long roads, flat fields, and gravel parking lots. Not that the Midwest is only made of these stereotypical details, but details like those do allow for some of the more magical and imagined things in my narratives to take place. The details that create what we think of as the Midwest create a runway for me and allow me to get at the deeper emotional essence buried beneath those details.

And yes, there is a lot of disappointment in this book, but it is there to create empathy and show that the people of this region are relevant and are more similar rather than different to other people that claim different regions. All of us have emotions, inexpressible and ephemeral in nature, that resound in the landscapes around us. Characteristics considered Midwestern help me to preserve those impalpable things if only for an instant.

Charlotte Pence has praised your book for its articulation of “the strange, fluctuating space between the real and the imagined.” Can you talk about how your poems approach that space?

I was an only child, so for a long time whatever I made up in my head in regards to my perception of the world no one ever corrected me. For a long time I was convinced of my own imaginings. So when an image takes a turn into the magical or surreal, I feel like that is how I genuinely saw that thing the first time. And all poetry does this to some extent, right? How else do you elevate a thing beyond itself? My answer is by giving that thing magical or surreal parallels. But I make sure that these magical and surreal jumps are always tied to some emotional register that grounds them, that makes them relatable. At least, I hope I’m doing that.

I also like to play with time, and I think the framing of this book echoes that. “Repeating the Past in Future Tense” and “Repeating the Future in Past Tense” serve that function. And I think when we’re dealing with memory and when we are trying to conjure up and recall the way we felt about certain events in the past we have to imagine or invent things sometimes. I think when we are remembering certain things, the past and the future and the present all collide. We’re currently worried about how people will perceive our interpretations of the past, and that is a very complicated idea for me. So sometimes these imaginary spaces open up and allow for a deeper understanding of reality and I allow time to become non-linear. And when time is dismantled or distorted I think some events that are real start to seem unreal or outside of themselves and beyond us.

The Power of Vulnerability in “Honey Girl”

Could you share with us one poem that captures the spirit of the book?

Silence Rising, Dust Rising
The quiver of prairie grass
reminds me of birdsong,
and all those mornings I rose
from one life into another.
From that life where I would run,
feet callused from paspalum and rye
out to corn silos I took for the end
of the world, until I walked farther—
until it shrank and shriveled
like chicken wire. I cut myself
bare handed. I caught myself
living here and not living.
The smell of hay lingers.
The garden is overgrown
with sowthistle, bermuda, crabgrass.
I want to scoop the dirt up, turn it,
plant every thought I have
until they grow new, but my brain swings
like the screen door I used to slam,
listening to wind chimes sing, watching
silence rising from the dust that rises.

For me, this poem is representative of an individual’s idea of home—the celebration and hope of it but also the common disappointment of time passing and watching that idea change. Time changes what home means to us. We have to reinvent those memories and those memories reinvent us. It’s an infinite dialectic. This book is about home. For me, home is the Midwest, how I am connected to the landscape and how the landscape is connected to me. And when people come and go from that landscape it changes the way I see the landscape and myself.

Ghost County is your first book. What about the process of publishing your first book has differed from your expectations? What’s it been like working with Midwestern Gothic Press?

Since it was my first book, I don’t know if I’m able to clearly define any expectations I had. Midwestern Gothic is a journal I have always respected, and when they picked the book up I expected that they would be a great fit. I was excited to publish with them because I knew that their current readership was the perfect readership for Ghost County. They publish work that defies Midwestern stereotypes, and I like how they give their contributors space on the blog to create their own definitions of the Midwest. Through the multiple definitions created by their contributors, they establish a very inclusive and well-rounded definition of what it means to be of the Midwest or write with certain Midwestern aesthetics. And as far as working with the editors of MG Press individually, well, it’s been perfect. They’re actively promoting the book, and I couldn’t be happier. They take good care of me. They’re friendly folks, and I’m honored that they thought my book figured into their ongoing definition of the Midwest.

‘Universal Harvester’ Is a Masterpiece of Midwestern Horror