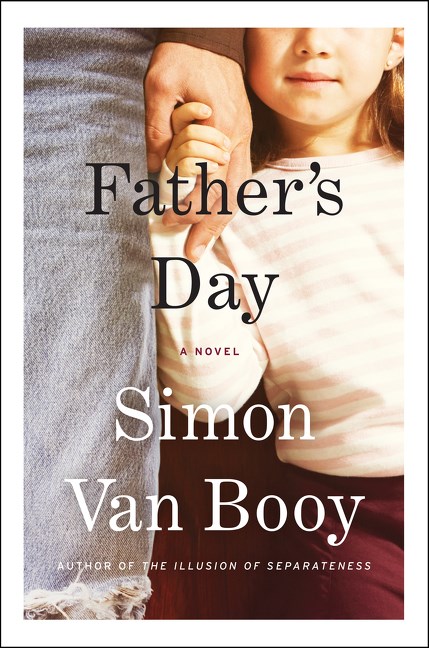 When a six-year-old girl named Harvey is called into the principal’s office at school, she thinks her parents have only been hurt, at first, and pictures them in full-body casts. But when she realizes they’ve been killed in a car crash, “Harvey looked at the door to principal Russo’s office, because her real life was on the other side.” On Father’s Day twenty years later, she’s a professional artist in Paris who calls her father’s once-estranged brother “Dad.” As Harvey shows her surrogate father around Paris, she presents him with a series of gifts that drive the story toward a memorable final scene.

That’s the rundown of Father’s Day, a new novel from Simon Van Booy, a highly decorated British-American novelist, essayist, and philosopher. While reminiscent of his earlier work in The Illusion of Separateness and Everything Beautiful Began After, Father’s Day is a departure in terms of characterization and setting from its arguably more cosmopolitan predecessors. While most of Van Booy’s protagonists hold artistic occupations in Europe, Father’s Day features a violent ex-convict in Long Island. Fans who have followed Van Booy’s career will find plenty to appreciate, but new readers may have a more subdued experience.

Like his first two novels, childhood and an ethereal connection with the people who shape our lives are the thematic engines of Father’s Day. Van Booy’s prose is simultaneously minimalist and emotionally grounding, which is to say he has a knack for sussing out the right details and ignoring the inessential. Of Harvey’s childhood before losing her parents, Van Booy writes:

There is a book of photos somewhere, of Harvey when she was five or six. In one picture she is standing in the driveway with a backpack, her hair pulled back in a ponytail. On another page, she poses on the front step in a red sweater and gray wool skirt. She was told to smile because in pictures it’s how you’re supposed to feel that counts.

Throughout the book, the story jumps back and forth in time and place, a device ostensibly meant to cohere otherwise disparate narratives into a unified and satisfying whole. Unfortunately, the shifts often feel random and disjointed, like puzzle pieces that don’t quite fit unless you mash them down hard enough. After one of these shifts, it takes a few lines to regain solid footing in the story.

As the novel progresses, the story begins to strain suspension of disbelief. Given that Harvey’s surrogate father is by all counts an angry and violent ex-convict with “attitude…and the tattoos, and the record, and the foul language, and that god-awful messy house,” it seems unbelievably irresponsible, even negligent, for anyone to leave young Harvey in his care.

As the story progresses, much of the dialogue feels stiff and insincere, particularly in the Paris scenes. Harvey and her surrogate father, Jason, pass by a motorcycle shop and Jason notes, “These are fast bikes…Dangerous bikes—which means that you can always get parts for them, because so many get wrecked by inexperienced riders.” Most of Harvey’s dialogue directed at Jason includes the word Dad. “Why don’t you get one of these new bikes, Dad?” is followed a few lines later by, “You should wear your hair down sometimes, Dad.” The effect of the repetition infantilizes Harvey to a degree and pulls us right out of the fictive dream.

No artist, regardless of skill, conjures a masterpiece every time they present something new, despite unrealistic expectations to the contrary. Mr. Van Booy’s earlier novels are effecting and moving works of art in every sense, and though the same potential exists in Father’s Day, it ultimately falls short of the very high bar Mr. Van Booy has set for himself.