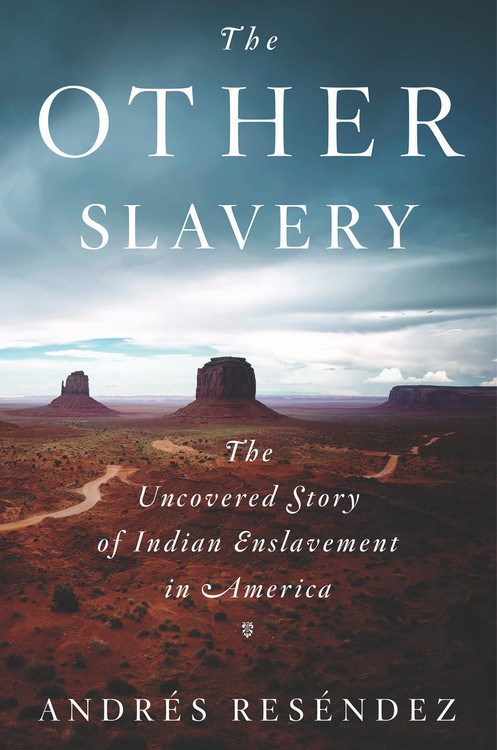 For most of us, the word “slavery” has become exclusively figurative, unless we’re talking about the Atlantic slave trade that preceded the Civil War or present-day human trafficking. But very few of us understand the physical and psychological reality of slavery, or how it served as one of the primary foundations for Western civilization as know it. In The Other Slavery: The Uncovered Story of Indian Enslavement in America, however, Andrés Reséndez lifts the veil of time to dispel “our historical myopia” of the enslavement of Native Americans.

Beginning in the Caribbean before moving into Mexico and the U.S., Reséndez doesn’t just tell the history of Indian enslavement in North America: he also shows us how the national identities of the United States and Mexico were built upon the enslavement of indigenous people.

According to Reséndez, the techniques of control used during African-American slavery—and subsequently during Reconstruction and the Jim Crow era—were developed and refined from the moment the very first Europeans set foot in the New World. Indigenous peoples were the original test subjects for slavery, but somehow this fact has been largely ignored by modern history. Reséndez reclaims the narrative and demonstrates that slavery is neither old nor new, but an eternal system of coercive labor practices.

Reséndez narrates the deliberate and systematic dissolution of the continent’s native population and how it stemmed from the European reconciliation of religious belief and greed: in this instance, the Catholic beliefs of the invading Spanish, which demanded that the indigenous population be respected versus the imperial, capitalist greed of that same invading group, which saw Native Americans as a natural resource to be exploited.

The United States’s obsession with the mythology of the West and Manifest Destiny not only robbed indigenous people of their land and homes, but also absolved itself of any wrong-doing. In our hubris, we ignored the fact that, “If we were to add up all the Indian slaves taken in the New World from the time of Columbus to the end of the nineteenth century, the figure would run somewhere between 2.5 million and 5 million slaves.” Our conception of Native Americans was not one of slavery, but one of rivalry, a self-serving narrative that supported the myth of Americans (that is, white Americans) as underdogs overcoming the odds.

Further, there is an intimate relationship between African-American slavery in the United States and indigenous slavery as practiced throughout the continent. In fact, Reséndez strives to make it clear just how “Indian slavery actually explains a great deal about the shared history of Mexico and the United States and casts new light on even familiar events.” The shared original sin of slavery is grounded in power and profit, a narrative that winds its way through the national identities and politics of both nations to this day.

It’s easy to fall back on the textbook narrative of how indigenous peoples were overcome by Europeans, how a combination of war and disease put white culture on top. However, as Reséndez asserts, “an exclusively biological explanation is at odds with much of the documentation of that era and runs contrary to the observed adaptability of humans.” Disease, famine, and war were most certainly factors in the genocide of diverse native communities, but Reséndez proves how slavery played a much larger role than previously thought. The in-fighting among white settlers about how to relate to the indigenous population would come back again and again as white culture sought to profit.

Further, Reséndez shows how the colonial lust for resources drove the dehumanization of the native population. Pre- and post- independence, Mexico’s “economic promise lay in the extraction of gold and silver based on Indian labor.” From the mid-1500s, indigenous labor was coerced as regimes positioned Indians as legally “free” yet still enslaved. Explaining just how colonial and post-colonial governments were able to pull off this maneuver makes up the majority of the book, the purpose of which is twofold: to demonstrate the historical reality and to suggest how these actions are more simple and familiar than we want them to be. Indian slavery set the groundwork for bondage and labor coercion, “disguised as debt peonage, which stretched the limits of accepted labor institutions and even posed as legal work, this other slavery was the direct forerunner of the forms of bondage practiced today.”

The Other Slavery is a fascinating, insightful historical text that blends accessibility and academic rigor while complicating our perspective on labor practices. Reséndez’s narrative is vital to understanding how enslavement was a major factor in the development of American identity.

The Women Who Challenged and Inspired Virginia Woolf

The Truth About Family, Love, And Loss