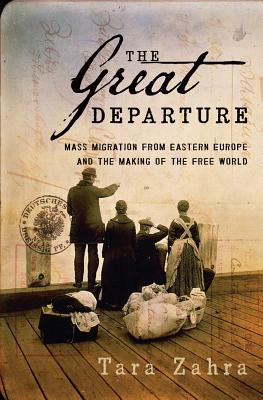 More than 55 million Eastern Europeans migrated to America between 1846 and 1940, forever changing the landscapes of both continents. Tara Zahra, a history professor at the University of Chicago, unearths some fascinating revelations about this mass exodus in her new book, The Great Departure: Mass Migration from Eastern Europe and the Making of the Free World, including the fact that 30-40% of the immigrants eventually returned to Europe.

While Zahra’s detailed narrative spans the globe, her adopted city of Chicago played a significant role in the “great departure,” first as a major destination for immigrants and later as a warning, when Upton Sinclair’s 1906 novel The Jungle critiqued the conditions of working-class immigrants in Chicago, particularly at the Union Stock Yards.

I recently spoke with Zahra about the legacy of the migration, Chicago’s role, and what her book can teach us about today’s refugee crises in places like Syria, Afghanistan, and Somalia.

How would America (and Europe) be a different place today had the Great Departure never occurred? Or, alternatively, if 30-40% hadn’t gone back?

Then there are the political, religious, and cultural ideas and practices that traveled across the Atlantic and back; the transfer and transformation of material culture, like food, architecture, objects; the emergence of new policies of policing and border control; and new political strategies for controlling and directing mass migration, including very dark ones like ethnic cleansing and colonial settlement.

But in addition, as I argue in the book, mass migration launched debates about the very meaning of freedom and mobility in the context of a globalizing labor market. What mattered more, the freedom to move, or the freedom to stay home and enjoy a life of economic stability and peace? That question was intensely debated at the turn of the twentieth century and it continues to be debated today. Not everyone was convinced that America was the “Promised Land.”

Were there any other books, like The Jungle, that served as a warning for immigrants with their hearts set on America?

There was a huge amount of anti-migration propaganda. Another famous example, less well-known in the U.S., is Henryk Sinkiewiecz’s novel After Bread. Sinkiewiecz was a Polish journalist and Nobel Prize–winning novelist. The protagonists are immigrants from Congress Poland to New York, and they all end up dead.

Can you tell us anything about the immigration trends here in Chicago between 1846 and 1940?

Chicago was a major destination for East European migrants, especially in the late nineteenth century. They found work in the meat-packing industry, stockyards, and steel mills. Many came from Austria-Hungary, including large numbers of Polish, Serbo-Croatian (what was then called South Slav), Ukrainian (then called “Ruthenian”), Slovak, Hungarian, Jewish, and Czech migrants. There are still large East European communities in Chicago today.

Chicago also became a hub for nationalist exiles during the First World War (like Thomas Masaryk), and a center for the study of immigration. At the University of Chicago, sociologists like Florian Znaniecki, William I. Thomas, and Robert Park all studied East European migrants, and some of those studies influenced scholars and policymakers concerned with migration for decades.

Any other Chicago details you came across in your research that didn’t make it into the book?

I came across the story of a teenage girl who emigrated to Chicago to join her father, who worked at the Quadrangle club at the University of Chicago. There were huge conflicts between the daughter and the father, and the Immigrants’ Protective League ended up intervening in 1928, which is how I found the case. It was a good example of the ways in which migration often strained family relations. In the case of this girl, Helen, migration also probably provided new opportunities for independence. On the other hand the social workers who intervened were highly paternalistic and superior—they decided that all the family’s problems were due to the father’s “backward” attitudes from the Old Country.

What can your book help us understand about today’s refugee crises in Syria, Afghanistan, Somalia, etc.? Any parallels, or totally different situations?

I think there are a lot of similarities. Just like in the 1930s, migrants are trapped in no-man’s lands and barbed wire fences are being erected across Europe; right-wing movements across Europe (and in the U.S.) are running, and often winning, on anti-migrant platforms.

It might seem like a great irony that countries that produced so many migrants over the last century, that celebrated the fall of the Iron Curtain, are now so intent on building new fences. But I think that the hostility to migration in East Central Europe can be explained in part by the fact that there has been a longstanding tendency in the region to equate “democracy” with national homogeneity.

It can also be explained by the reality that East Europeans have fought long and hard for the right to freedom of mobility within the European Union, and are now often most invested in keeping anyone from outside of “Fortress Europe” from enjoying the same privileges. For many decades East European migrants were considered undesirable and even racially different; now they are often defined as the “good” migrants in opposition to those from outside of Europe.

The history of mass migration in the twentieth century also shows us how the distinction between “economic migrants” and “political refugees” was developed and institutionalized in the first place, and the extent to which the line between those categories has fluctuated over time, according to changing political and economic priorities.

What drew you to the Great Departure, both as a historian and as a writer?

I have always been drawn to immigration stories—many of my favorite novels are about migrants. Part of my Dad’s family came to the United States from the Ottoman Empire in the early twentieth century (they were Sephardic Jews) and lived on the Lower East Side of New York. Some of the family’s stories stuck with me. Also, living in Chicago I had the sense that East European history is all around me but that I didn’t know enough about it.

As a historian I was drawn to migration because it remains such a hugely important issue in our own time around the world, and I wanted to understand the origins of those debates and conflicts. It is also a subject that brings together the stories of ordinary people with political history, and that links the history of East Central Europe with the history of Western Europe, the United States, and the rest of the world.

What happens to a person after being named a MacArthur Fellow? How has it impacted your life?

I’m still finding out! It’s been such an amazing affirmation, and a shield that helps protect me a bit against self-doubt. I hope that over the long run it will enable me to take new chances with my research, and reach broader audiences with the historical stories that I find important.