Mystery in Mecca: The Dove’s Necklace by Raja Alem 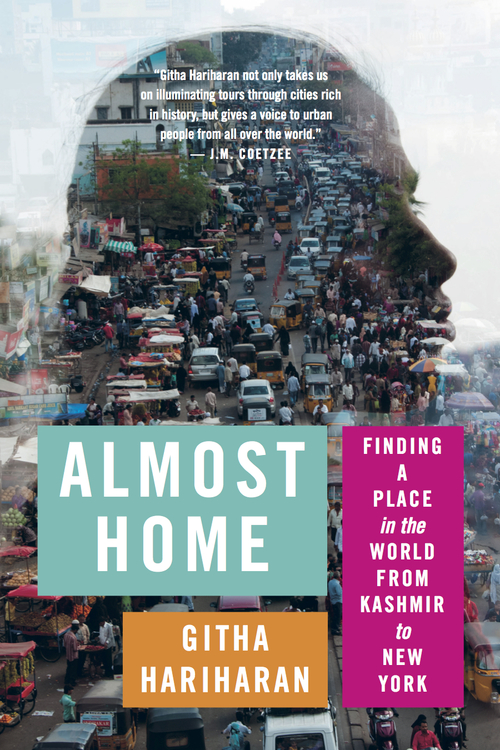 On a visit to India, award-winning novelist and editor Githa Hariharan met a local man who, despite living his entire life in the village of Hampi, didn’t know any of the traditional stories immortalized by local statues and shrines to Ganesha, Narasimha, or any of the other gods. He didn’t know about the 16th-century warrior king, Rama Raya, or how the village was built on the site of the ancient city of Vijayanagar. Hariharan did.

Having lived in Manila, Bombay, and New York, Hariharan is a complete cultural encyclopedia, and Hampi is just one of the many stops in her new collection of essays, Almost Home: Finding a Place in the World from Kashmir to New York. The book is modeled after Italo Calvino’s Invisible Cities, in which Marco Polo describes the imaginary cities of Kublai Kahn’s kingdom. In Almost Home, Hariharan takes the place of Polo to explore real-life destinations, colorful cities brought to life through her grasp of local languages, cultures, and history.

Through Algeria, Palestine and India, from Vijayanagar to Washington, D.C., Hariharan asks, “How is a great city born?” She pushes beyond the obvious answers  to shed light on the characters who played their roles behind the scenes. Thomas Jefferson, for instance, is often credited with birthing Washington, D.C. when he wrote the Declaration of Independence, but Hariharan introduces us to Richard, Jefferson’s manservant and slave. The fact that our founding fathers owned slaves is a dissonance familiar to many, but Hariharan reveals other, more surprising social hierarchies in her humbling tour of the world.

In this way, Almost Home is distinctly less concerned with the royal dynasties of history than with the marginalized proletariat, and Hariharan’s conversations with working-class locals replace Polo’s conversations with the emperor Kublai Kahn. Most of the cities she visits are either currently occupied or were once colonies. As with the man she meets in Hampi, Hariharan uses these local interactions to frame the tales of each city’s past.

Hariharan is at her best when she writes from experience, as a member of a marginalized faction. For instance, on her search for a guide in Hampi, she notes that women in India are vulnerable in a degrading way unfamiliar to the West.

I looked at a white woman ahead; she was wearing shorts and a tiny halter top. Then two men appeared out of nowhere and raced up to her. They seemed to be selling her something or offering their services as guides. Clearly the transaction did not work. She walked ahead; they screamed “Sule! Sule!” […] The girl must have assumed they were still advertising their wares and walked on without fear. I cringed. Sule in Kannada means whore, and it was difficult for me to pretend I didn’t know what they were shouting. But the men looked at me blandly and said in English “This is old historical sule bazaar. Do you need a guide, Auntie?

Her observations are sharp as she reveals power dynamics with subtlety. Everyone comes away with a little dirt on their face, which makes her interactions feel true-to-life. She achieves the same complexity on a grander scale when she describes the post-colonial struggle of Algeria to forge a new national identity. Though Algerians had rid themselves of France’s rule, she notes that “there was something of the French nation about all this, drowning all tongues in the sea of one language.” As an Indian woman in a post-colonial country, Hariharan can see the discord in Hampi and Algeria clearly.

In contrast, when she observes the afflicted as an outsider, the situation can come across a bit two-dimensional. After visiting a Palestinian farmer in occupied territory, she writes:

I took one last look at the slabs of concrete standing firm before [the] house, the wall that makes sure Abu Nidal cannot see the valley from his house. The wall stands ugly and gray, but there is a bird painted on it, a yellow bird with pink-edged feathers. Abu Nidal’s children painted the bird with its wings open in flight.

That “one last look,” as well as the contrast of an ugly, gray wall with pink-winged birds, comes across as saccharine. The farm seems more like a movie set with an obvious moral takeaway than a real-life human rights struggle.

But even in moments when she draws her conclusions with a permanent marker rather than a number-two pencil, Hariharan’s stories should be required reading. In the past month, a caste-system protest in India left much of Delhi without running water while American presidential hopefuls discussed standing “unequivocally with Israel.” In a CBS interview, Canada’s Prime Minister said that “Americans should know more about the rest of the world.”

Almost Home is a great start. Read it in order to decode the daily news. Read it just before traveling to the Far or Middle East, or read it because the last five books you read were written by white American men. To ignore the farmers and seamstresses of Hariharan’s essays is to discard the responsibility and interconnectedness of living in a globalized world. Each essay will add depth to your understanding of the complicated, nuanced relationship between daily life and history, no matter what city or country you call home.

Weird, Sensual and Scatalogical: Albina and the Dog-Men by Alejandro Jodorowsky