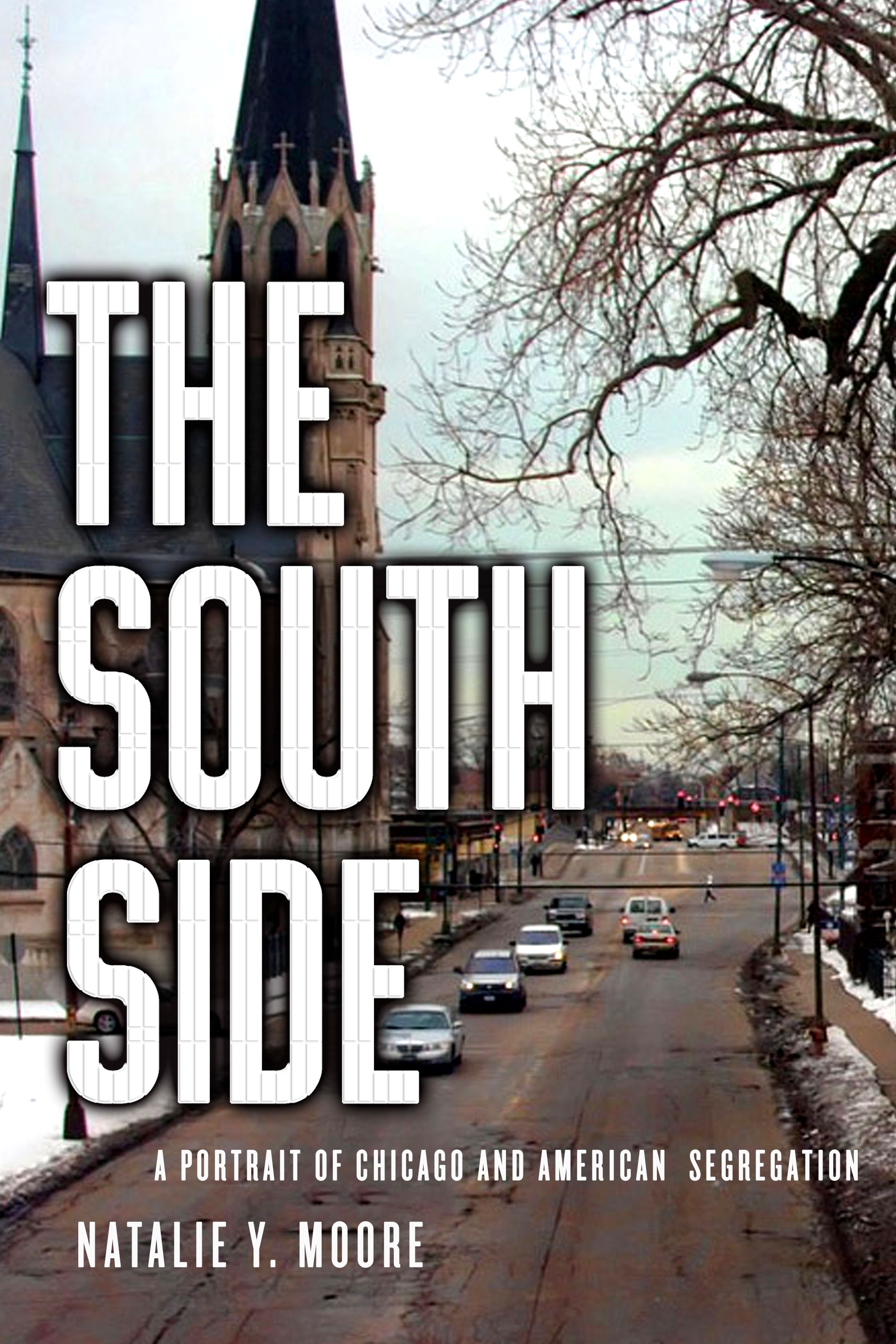 More than 500,000 African Americans moved to Chicago between 1910 and 1970 during the Great Migration, leaving the oppressive Jim Crow South behind for the promise of new jobs and good homes, as advertised in the pages of the Chicago Defender. But when they arrived, white employers turned them away, and racist housing policies—also known as redlining—kept them confined to the city’s South Side.

Natalie Y. Moore’s new book, The South Side: A Portrait of Chicago and American Segregation—an absolutely essential read for all Chicagoans, new and old—is full of revelations about how Chicago became (and remains) one of the most segregated cities in the world.

In a fascinating blend of reportage and memoir, Moore shows how the socio-economic realities on the South Side—where the unemployed often stay unemployed, the working class often stays working-class, and the middle and upper-middle class face challenges unknown to the North Side—are the direct results of racist housing and banking policies, retail redlining, food deserts, public school failures, and misrepresentations in the media.

But also, Moore describes how, by and large, the South Side isn’t the “war zone” oft-depicted on Fox News or CNN, where all 42 neighborhoods are reduced to the worst blocks of Englewood on a hot summer night. As if middle-class and upper-middle-class neighborhoods like Hyde Park, Kenwood, and Moore’s own Chatham don’t exist, as if thousands of lawyers, doctors, judges, nurses, journalists, and college students don’t live south of I-55 in some of the most vibrant, “magical” communities in the city.

Whether you live on the South Side or have never ventured south of the Loop, The South Side will change the way you see Chicago, a true “tale of two cities,” thanks to Moore’s blistering insights. The Chicago Review of Books spoke with Natalie Y. Moore, WBEZ Chicago‘s South Side Bureau reporter, about writing and researching The South Side, what the mayor and everyday Chicagoans can do to combat segregation and racism, and where to see some of that South Side “magic.”

What inspired or motivated you to write The South Side? What was missing from the current canon of books—and conversations—about the region that you wanted to address?

As a reporter for WBEZ, I have covered issues around segregation and inequity for years. It was important to step back and create a coherent argument around my observations. I realized that inequity would continue in Chicago unless segregation was addressed. I felt also that I had a unique perspective as someone who grew up in Chicago. I found in a lot of nonacademic books about urban affairs or issues, the authors weren’t immersed in the city the way I have been. I hope that provides another layer and perspective.

As Ta-Nehisi Coates did in Between the World and Me, you combine research and reportage with your own personal story in The South Side. Why did you decide to take this approach instead of, for instance, a more distanced, academic appraisal of the issues?

I had something to say. In the Chatham chapter, for example, I lived the story. I wanted to show despite the obstacles facing black people and neighborhoods, black neighborhoods are not bad places. Admittedly, it can be hard for a reporter to insert herself in a story when we’re trained not to do that. But this book isn’t designed to be just facts, research or numbers. I like to think the personal narrative helps the reader connect to the issues.

Why do you think Chicago (and thus the South Side) gets such an oversized reputation as the “Murder Capital of America” when the stats tell a different story?

The culmination of violence coverage leads to such a reputation. Then throw in the Obama factor of the press being fascinated by Chicago. And then the national media trying to outdo each other by parachuting in Chicago to tell the story of violence. Often, people aren’t interested in stats. They are driven by emotion.

For Chicagoans who haven’t spent much (or any) time on the South Side, where are some specific places you recommend visiting to appreciate how vibrant and “magical” some of its communities are?

I recommend simply driving/visiting through different neighborhoods to see the beauty of places—from South Shore to Pullman. A simple thing that we do in my family is pick a new neighborhood to explore. We pick a restaurant, walk around. Chicago is massive, which is a plus and sometimes a minus. Exploration exposes children to the wondrous nature of the city. Families should try that for the South Side and check their fear/biases in the car.

What tangible steps could Rahm Emanuel (or his successor) take to help the socioeconomic issues and segregation on the South Side? How about the average citizen of Chicago? What can we do?

In my last chapter, I give voice to several scholars, activists and artists who have specifics about diminishing segregation and creating a more equitable Chicago region. Those solutions range from getting rid of exclusionary zoning to creating sister neighborhoods, similar to the sister city international program Chicago has.

One of the dangers of war terminology is someone is the enemy, pitting law enforcement against black people in black neighborhoods. Further, Chiraq is not a term borne out of solidarity for Iraqis. Young people say it as a badge of honor. Englewood has its share of violence but it’s much more than a violent neighborhood. One would think that there are no block clubs, strong neighborhood associations or residents trying to make it better. War metaphors also lean on violence or more police as a solution.

Where do you stand on Ta-Nehisi Coates’s “case for reparations,” considering how many of the issues facing black Chicago are direct results of redlining and other harmful, race-based policies?

In his epic piece, Ta-Nehisi Coates didn’t specify a dollar amount or specifics about what reparations should look like. He argued that there’s a case for reparations and a robust discussion needs to take place. I agree. The issue is beyond slavery.

What do you see the South Side becoming in 50 or 100 years? More integrated?

Some neighborhoods may be more integrated. But if housing policies don’t change in the city or the region, some South Side neighborhoods will remain stuck the way they are now.

What was your response to Spike Lee’s Chiraq? (Other than the title, of course.) Are there any other fictional portrayals of the city that capture the region’s sense of place or history that you’d recommend?

That movie was a mess and couldn’t decide what it wanted to be. Satire? Preachy message film? Spike Lee acted as if the movie was an actual depiction of Chicago (sans the sex strike) but nothing about the movie felt Chicago. He narrowed violence to two street gangs draped in their colors. That’s so 1990s.

No neighborhood context existed. The only structural critique about the city came from a white man. Given all of the black activism we see in Chicago, how does this movie choose to show empowerment? Between the legs of women. What a disappointment and the satire fell flat.

On a lighter note, Love Jones captures a sense of Chicago. And I’m a sucker for The Fugitive.

Note for our Chicago readers: Celebrate the publication of The South Side with Natalie Y. Moore on Tuesday, March 22 at her book launch in the historic Parkway Ballroom in Bronzeville.