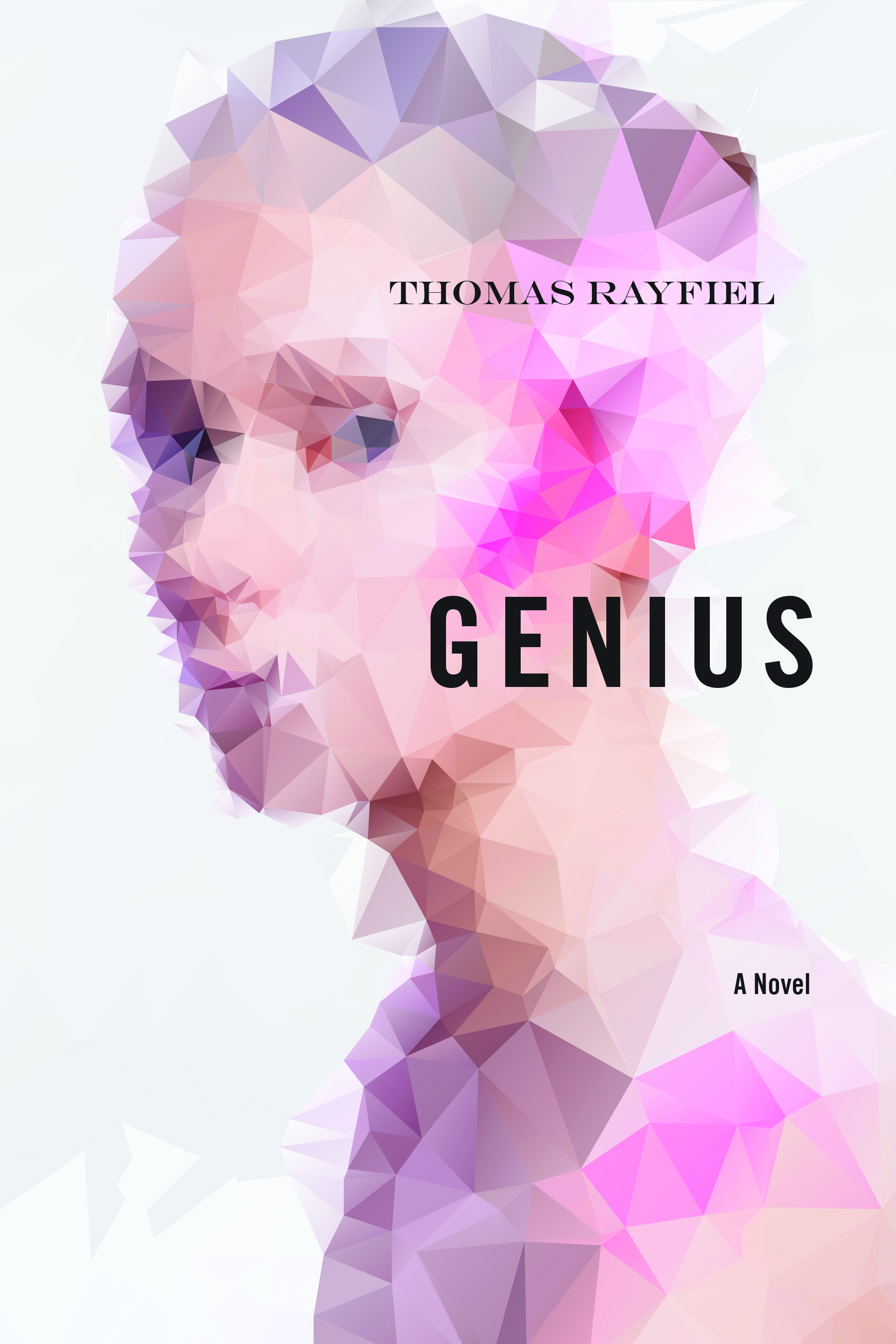 In a day and age where Kanye West is considered a genius, any discrete meaning left in the word “genius” has been ground down to the lowest common denominator.

While Thomas Rayfiel’s new novel Genius only marginally touches on the traditional idea of genius, it implies that the struggle to find, maintain, and protect one’s true self is the closest thing left. In ancient Rome, the genius was a mythological concept representing an individual’s protective force, a sort of guardian angel. Rayfiel’s protagonist in search of a guardian genius is Kara Bell.

Diagnosed with cancer, Kara leaves Brooklyn and returns to her hometown of Witch’s Falls, Arkansas. Her hair is falling out and her only real hope of survival is to find a bone marrow donor. Since her brother and mother aren’t matches, she needs to track down a relative of her absent father. Kara is also working on a graduate degree in analytic philosophy and coping with the fact that she’s in love with her childhood best friend, Christy.

Back at her mother’s house in Witch’s Falls, Kara finds herself displaced and entangled. She has shifted context from the hip, young Brooklyn streets to a backwater of outgrown childhood friendships in Arkansas. Kara’s mother is sleeping with the town’s football coach, who might quote Socratic philosophy. Kara can’t be sure, because she has trouble separating the voice in her brain from the voices of people.

To make matters worse, in the middle of her search for a bone-marrow donor, Kara finds out she’s eight weeks pregnant. She barely remembers sleeping with her graduate philosophy advisor on the carpet a few weeks prior. The pregnancy complicates her already fragile health—and her romantic status as a single, gay woman.

Cancer does strange things to her. “Cancer, I have discovered,” she says, “only accentuates your dilemma, rather than replacing it with a new one.” When someone reminds Kara that she always seemed to have things under control in high school, she disagrees.

“Back then I was a certified nut.”

“Less so,” I admit, with something like regret. “I wonder, I know it’s superstition basically, but I wonder if all the treatments, and maybe the sickness itself, have robbed me of whatever specialness I had.”

Rayfiel writes deftly from a female character’s perspective, raising the question of how male writers can know if they’re writing a convincing portrayal of a woman’s interior life, or if they’re being presumptuous, condescending, or just plain wrong. Should male writers attempt female protagonists? If the writer’s aim is to craft a profoundly human character, who suffers and feels confused and just happens to be female, then the answer is yes. A person’s masculinity or femininity does not often define or consume their thoughts more than others aspects of their personality. And of course, Rayfiel is hardly the first writer to go down this path. If male writers only stuck to writing male protagonists, we’d have no Anna Karenina, no Madame Bovary, no Charlotte’s Web.

Yet, of course, women write female characters better than men do. The question about what makes one portrayal better than another gets to the heart of how we identify authentic writing or stories that feel true. Many writers won’t even attempt to write fiction from the perspective of the opposite sex for fear of falling short. That confining fear and lack of curiosity can produce self-indulgent echo chambers. If it’s possible to get it wrong, it’s possible to avoid that risk by writing only “what you know.”

It’s possible, too, that Rayfiel simply sees a greater challenge (as a literary project) in portraying the life of a young gay woman. Kara tells us that “male sexuality is so fundamentally boring as to put me to sleep.” Rayfiel’s cavalier treatment of Kara’s affair with her advisor is an acknowledgment of the complexity and confusion that defines young-adult sexuality rather than an inability to imagine a gay character who only has stereotypically gay experiences.

Sometimes, Genius feels like an indie film populated by familiar characters, like Garden State or Juno (after all, Juno was the Roman name of the female genius). But that reduction is a function of the book’s subtleness rather than a lack of literary quality.

We are often quick to equate the amount of work required by the reader with literary excellence or sophistication. A book that is easy to read is not considered as highbrow as something more inaccessible (think To Kill a Mockingbird versus The Recognitions). Yet Rayfiel’s writing capably delivers complex themes like inheritance, sexuality, and disease through the vessels of relatable, contemporary characters and accessible prose.

The worst that could be said about a novel called Genius is that reading it becomes a chore, but Kara’s journey is a well-crafted, compelling take on the insecurities and soul-searching of young adulthood. The story of her life—and the prospect of her death—matters so much because the genius that protects and defines her is ultimately irreplaceable.

Matt Bucher is a writer and editor in Austin, Texas. He is on Twitter @mattbucher.