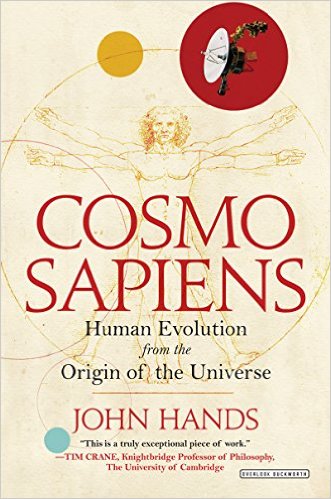 Think back to your high school science class. The universe started with the Big Bang, right?

Like most intelligent people, you’re probably under the impression that the Big Bang represents the latest scientific consensus, like the need for vaccinations or the reality of human-caused climate change.

But in Cosmosapiens: Human Evolution from the Origin of the Universe, British author John Hands discovers the Big Bang theory has fallen out of favor with most physicists, along with several other startling conclusions.

After years of surveying the world’s most influential scientists, Hands attempts to answer the primordial questions: “What are we, and why are we here?” The resulting book is an exhaustive, fascinating look at humankind’s role in the story of the universe.

I recently spoke with Hands about writing Cosmosapiens, Neo-Darwinism, and whether we’ll ever know the answers to our oldest questions.

Given how many books have been written on the subject of human evolution, what inspired and motivated you to write Cosmosapiens? What did you attempt to do differently?

After the death of my wife from cancer I wanted to find answers to the questions of what we are, where we came from, and why we exist. Having been trained as a scientist I wanted to learn the answers revealed by systematic observation or experiment—that is, what science tells us—as distinct from religious belief or philosophical speculation or insight.

However, I couldn’t find any books that provided the answers. First, most science books cover only a small part of human evolution, such as how we evolved from pre-human ancestors. I wanted to know how we evolved not only from the first life on Earth, but also, where did that come from, right back to the origin of the matter and energy of which we ultimately consist. Second, most books advocate a particular current theory that is presented as fact. Knowing that scientific understanding changes as new evidence is discovered and new thinking develops, I wanted an objective evaluation of the current evidence. So I decided to research and write the book that hadn’t been written.

Were you shocked to find such a lack of consensus on concepts like the Big Bang and Neo-Darwinism?

This did come as a surprise to me. I had planned only one chapter on the emergence and evolution of matter because I’d assumed that the Big Bang was well-established science. But that chapter turned into nine chapters because the more I investigated the more I discovered that the Big Bang theory was contradicted by observational evidence. In attempts to resolve these contradictions, cosmologists made major modifications to produce the Quantum Fluctuation Inflationary Big Bang model and also invoked an unknown “dark matter” that accounts for 27 percent of the universe and a mysterious anti-gravity “dark energy” that accounts for 68 percent of the universe plus a change in the universe’s expansion rate. The central claim of these modifications is untestable by any known means and hence is not scientific. Moreover, these modifications produce a logically inconsistent model if it is held that the Big Bang is the start of everything or else a model that contradicts this basic tenet if a quantum vacuum and an inflation field existed prior to the conjectured Big Bang, the currently favored view.

Likewise Neo-Darwinism, which is a gene-centered modification of Darwin’s evolution by competitive survival of the fittest, popularized by Richard Dawkins’s The Selfish Gene. This too comprises mathematical models whose results are contradicted by observational and experimental evidence.

In the absence of empirical support such mathematical models have become beliefs rather than science. Believers treat dissenters from within or infidels from without much as they are treated by members of a religion, albeit stopping short of physical violence. Humility in the face of what we don’t yet know and understand is an admirable quality not universally present in cosmologists and evolutionary biologists.

Are you concerned when public officials and private corporations deliberately ignore scientific consensus for political or capital gains?

We will never achieve breakthroughs if scientists don’t question the current consensus in their field. But to ignore that consensus for political or monetary gain is absolutely unacceptable.

Are scientific breakthroughs prohibitively expensive to make nowadays? Are garage-lab discoveries, like in the movie Primer, still possible?

All things are possible, particularly new thinking. But the history of science shows that most scientific breakthroughs are only possible now through the cooperation of international teams over many years using hugely expensive technology such as the Large Hadron Collider to test ideas about the fundamental nature of matter and energy. This has involved more than 10,000 scientists and engineers from over 100 countries cooperating since 1998 and cost some US $9 billion.

You mention the fact that scientists are more specialized now than ever. What is the cost of siloing? Is a cross-disciplinary approach the key to future discoveries?

Increasing specialization has produced a depth of knowledge but has also carved out canyons of expertise from which its practitioners find it difficult to engage in meaningful dialogue with other specialists except where canyons intersect. It has produced very few equipped to transcend their specialism and address fundamental questions of human existence such as what are we?

Too often specialists are unable to see the big picture, and from their canyons they tend to fire a fusillade of views derived from the training, focus, and culture of the narrow academic discipline in which they have spent their professional lives.

Cross-disciplinary approaches are one solution. But perhaps the biggest cost of increasing scientific specialization is that it tends to reinforce a belief in reductionism—the taking apart of a thing into its constituent parts in order to understand what it is and how it functions—as the only method of scientific inquiry. This analytical tool has proved extremely successful in increasing our understanding of natural phenomena and may explain satisfactorily the essence and behavior of relatively simple and isolatable systems, like why a crystal of rock salt dissolves in water. But reductionism is unable to explain complex, interacting, and emergent phenomena like life or humanity, just as breaking a Shakespeare play down into its words cannot explain the characters or emotions or plot of the play.

The key to future discoveries is that reductionism must be complemented by an holistic approach, which many pioneers of quantum theory advocated.

After completing your research, do you believe we’ll ever discover a unified theory that can explain both relativity and quantum physics?

Science isn’t static. Relativity theory and quantum physics are each more fundamental theories of nature than the preceding Newtonian theories. Hence I’m optimistic that new thinking and new evidence will eventually lead to a more fundamental scientific theory of nature that will explain everything that quantum theory successfully explains in the subatomic realm and that relativity theory explains in the realm of large masses and near-light speeds.

Do you think science will ever able to tell us for certain what we are and why we’re here? If not, should we be discouraged?

I conclude that science will never be able to tell us for certain what we are and why we are here. Within the domain of science, for instance, essential data has been irretrievably lost, such as evidence of the first lifeforms on Earth destroyed by geological processes.

More fundamentally, science has limited its domain to the empirical study of physical things and their interactions in order to differentiate its method of inquiry from that of religion, which is based on belief in divine revelation, and philosophy, which seeks answers through insight and reasoning. But as individuals we are more than the sum of our cells, molecules, atoms, and their interactions. We are shaped to a large degree by subjective experiences, which cannot be independently observed or experimented on by the scientific method. While science can show us the physical correlates of many of these things, it is a fundamental error to confuse these physical correlates with the experience itself.

Science explains why we are here by demonstrating that the virtually limitless interactions of matter and energy were constrained by a series of physical and chemical laws plus the fine-tuning of nine parameters and two dimensionless constants. Moreover our evolution required a planet with highly unusual characteristics. But science cannot explain why these laws and this fine-tuning exist.

We should not, however, be discouraged. Science has contributed, and will continue to contribute, a vast amount of knowledge about ourselves. Moreover, as Cosmosapiens reveals, there is an underlying pattern in the scientific evidence of collaboration, complexification, and convergence. Furthermore, the evidence enables us to conclude that, uniquely as far as we know, we humans are the unfinished product of an accelerating cosmic evolutionary process and the self-reflective agents of our future evolution.