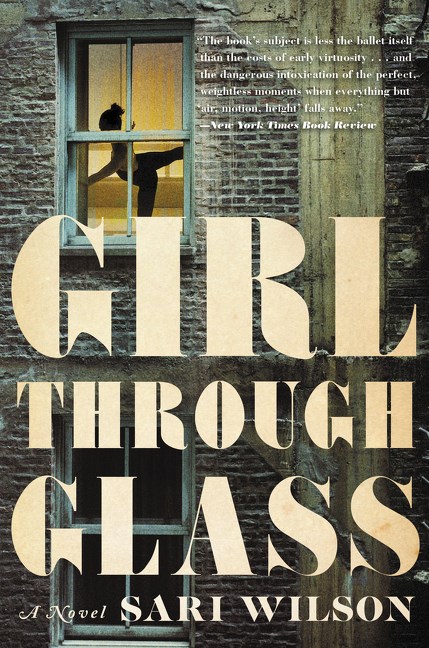 As City on Fire did last fall, Sari Wilson’s debut novel Girl Through Glass made me pine for a New York City that no longer exists. Back before Times Square was Disneyland Northeast, the city was more analog and unpredictable. Of course, New York was also considerably more dangerous 40 years ago than it is today, clouded by serial killers, blackouts, and hard drugs.

But for Mira—the 11-year-old ballet dancer at the center of Girl Through Glass—Gotham in ’77 is like Paris in La Belle Époque, a cultural and artistic crucible where she can make a name for herself in the age of George Balanchine.

Sari Wilson would know. She’s literally been in Mira’s shoes, having studied ballet at a Carnegie Hall studio in the late ’70s and early ’80s. In Girl Through Glass, Wilson channeled her own life experience into a beautiful, evocative novel filled with tactile prose and a surprising amount of intrigue and suspense.

I recently spoke with Wilson about writing her first novel, exploring a vanished world, and the time she spent in Chicago, ahead of a pair of events she’s attending in Chicagoland this month, including one at The Book Cellar tomorrow night.

You say in the acknowledgments that you “stole liberally” from your own childhood to create Mira’s story. How much of the book is autobiographical?

The characters are fictional—though many are composites of people I knew in the dance world. I was a childhood dancer and that is the part that I stole from—the setting, both of the ballet world in the late 1970s and early 1980s, and also of the New York City of my childhood. But I also like to say the emotional truth of Mira’s journey is mine, though how it all unfolds is totally her own (and much more intense and dramatic).

You capture the city and the life of a dancer in such vivid, specific detail. Do you keep a notebook to record things in real-time?

Thanks! I do keep notebooks—journals of a sort—and have for years. I ended up using some of these notebooks while writing the novel, especially in describing place. I went back and looked at my notebooks from my San Francisco years. I carried a notebook around New York, too. I think the job of a writer is to try to see clearly and to observe closely and that is actually really hard to do. So the notebooks help.

Why did you decide to include the present-day storyline in addition to Mira?

I wrote the Mira storyline first but the novel didn’t feel done. Then I started getting this other voice—a much older woman’s voice. As I wrote her story, the book began to finally take shape—Kate’s storyline allowed room for an adult perspective on the past. And, structurally, Kate’s story really helped in terms of setting up the sequence of events and the revelations of information.

Balanchine seems like such a mythical figure. How did people speak of him when you were in New York in the ’70s and ’80s?

Basically, people spoke of him like he was a god, or God. Balanchine, or Mr. B., was everything in the ballet world at that time. Whatever he preferred became mandated—body type, etc.—for better or worse. I never met him in real life, and I think I would have been confounded to meet him, since he was more mythical than real to me, even though he was alive and in the same city.

Did you see Black Swan? What was your reaction to it as a former dancer?

I really enjoyed Black Swan. I thought it was really smart with the material…It had fun with tone and mood (Gothic, and a bit campy) and at the same time it was really psychologically astute in terms of what can develop in that all-consuming quest for beauty and perfection.

Je Me Souviens: Character and History in “The Village Idiot”

Can you tell me about your time in Chicago? Any trips to the Joffrey? Not to see the Nutcracker, I presume…

I lived in Chicago for three years or so in the ’90s—in the Wicker Park/East Village area—and loved it. It was post-college and I was working in journalism and writing and I loved the sense of abandoned urban spaces in Chicago in those years and neighborhoods. I think it reminded me, in a way, of my 1970s New York City childhood, and there was a generative bohemian aspect to living there then that was great for writing and making art. I was really focused on writing during that period, so I didn’t explore much of the Chicago dance scene at that time. Definitely no Nutcracker in those years!

Is it too soon to talk about what you’re writing next?

I did start a new novel this year and am really excited about it, but I think it will be a bit before I devote myself to it. Writing novels for me calls for total immersion in those fictional worlds.

Note to our Chicago readers: Sari Wilson will visit two Chicagoland bookstores this month, including an event tomorrow night at The Book Cellar.

A Baker’s Dozen of Books for Mental Health Awareness Month