For Sari Wilson, Writing a Novel “Calls for Total Immersion” 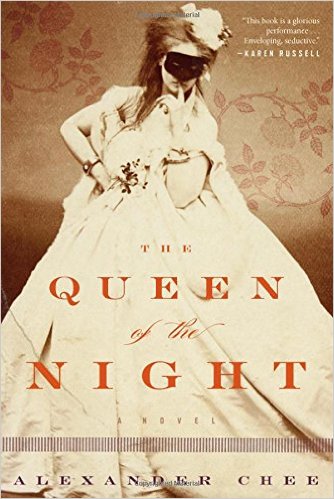 The Queen of the Night fittingly opens with opera singer Lilliet Berne at the height of her storied career, cheered by the masses as she enters an extravagant ball at Luxembourg Palace. But she happens to be more concerned about her ill-fitting dress than the crowd, and with good reason.

The year is 1882 and Lilliet is perhaps the most popular opera singer in the world. Blessed and cursed as a rare Falcon soprano, she fascinates and perplexes the Paris tabloids with her every move, rumor, and certainly every costume she adorns. She’s a global phenomenon, a pop diva times ten, and the wrong dress can end a career. Dresses, as Lilliet has learned, can even start wars.

This is the world Lilliet Berne inhabits in Alexander Chee’s long-awaited novel, The Queen of the Night, a world soon threatened after Lilliet has fought so hard to enter it. When a mysterious writer offers her a seemingly trivial proposition to star in an opera of his own writing, Lilliet realizes that the libretto is not fictional, but based on her secret past. A past she wants to keep secret.

Only four people could have betrayed her. To solve the mystery, Lilliet recalls the people she’s met, hated, and loved, and the tumultuous journey she’s undertaken under the guiding hand of fate. Or has she been guided by something else entirely?

Make no mistake, Lilliet’s story is an operatic journey—dramatic, audacious, and extravagant. Chee delves into aristocratic opulence with such zeal and awareness that it’s easy to find yourself enraptured by the history alone. It’s not opulence as a setpiece, but a thematic opulence that drives much of The Queen of the Night. As Lilliet ponders:

All of France was, at the time, not an empire, but a salon play of an empire, with a Napoléon who was not, in fact, a great general but had only a great general’s name, at the head of an army that could barely take an undefended cottage in the woods, and with an empress who could not control her maids.

There’s an illusory pull to all the characters and their fragile Second French Empire, and to witness their fall, their “undoing,” as Lilliet puts it, is mesmerizing.

15 years have elapsed since Chee’s widely praised debut novel, Edinburgh, in 2001, and one can see firsthand the degree of research and time put into the completion of this sprawling, 550-page historical novel. Chee masterfully incorporates Emperor Napoléon III and the Empress Eugénie, but also the likes of singer and composer Pauline Viardot, who is so richly developed I had no idea she was a historical figure until I recognized the name of her lover, the Russian writer Ivan Turgenev.

The book is littered with people from history, and they weave a complex tapestry around Lilliet, but their inclusion never feels like a gimmick or a wink. Instead, a close reading adds another layer of enjoyment—not just from the characters and locales, but also from exploring this period of history, too often shrouded between the fall of the first Napoleon and the beginning of World War I.

Lilliet herself can be baffling. As The Queen of the Night progresses, it seems at times the character is defined by her capacity for escape. Every time we get comfortable in a new setting, Lilliet seems ready to abscond from the narrative and begin anew. At one point, she even conspires to escape from someone else’s escape plan. “I meant to escape him as we escaped and, in doing so, escape them all.” The destination becomes irrelevant beyond the freedom that Lilliet desires.

Women, Freedom, and Diwan in “Shelf Life: Chronicles of a Cairo Bookseller”

Even her loves seem fleeting. She falls deeply in love with a character with whom she has never spoken. Upon a chance encounter with this love, she ruminates, “I had thought I would not see him again, had thought the world perhaps organized to keep us apart. But perhaps, this seemed to say, perhaps not. Perhaps not.”

This unearned romanticism can be jarring, but Lilliet’s impulsiveness gradually forms a more rounded sense of who she really is. Her decisions have consequences, her escapes leave scars.

Lilliet’s an operatic figure of her own invention. While she often gives credence to fate, and fears her own destiny, saying, “I had gotten Fate’s attention then—I was its play thing,” it’s her own willpower that drives her story. It’s her tenacity that makes her victories and defeats all the more enthralling.

The Women Who Challenged and Inspired Virginia Woolf

The Truth About Family, Love, And Loss