Why One Independent Bookstore Thrives While Barnes & Noble Struggles 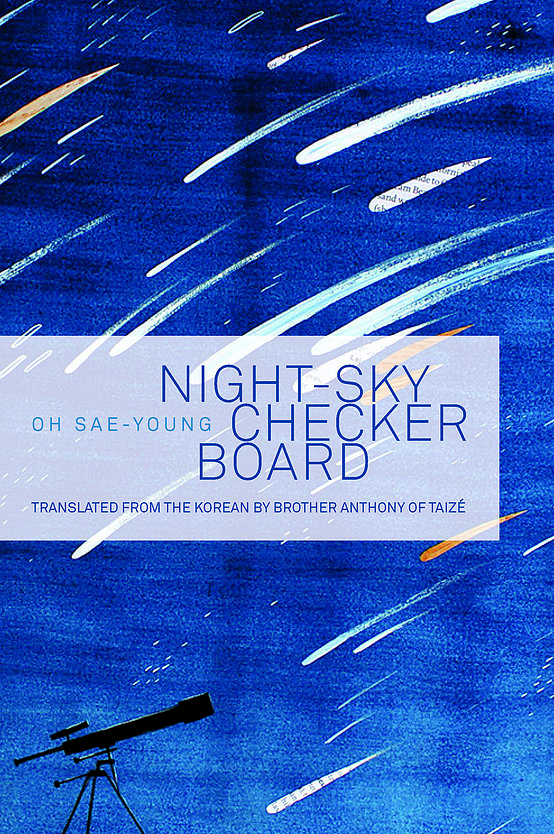 At first glance, Oh Sae-young’s poems start slow and simple—seemingly skirting along the surface of things deep, beautiful, and dark. But no matter how his poems begin, Sae-young always unfurls the unexpected.

Night-Sky Checkerboard is Sae-young’s first English language release and a work very much obsessed with existence, the building and destruction of nature, business, war, and industry. He unexpectedly examines merit, plays with worth, while lingering on the edge of past and present. The poems, translated by Brother Anthony of Taizé, showcase the Korean poet’s expert ability at keeping the reader from anything immediate or certain. His poems wait outside asking for answers, seeking some reason to come in from the cold.

Sae-young’s attention to detail, and his ability to shift back and forth between scopes both grand and minuscule, provide a sense that his poems are inextricably linked to something larger. Poems like “Deserted Harbor” for example—which moves quickly from hallway at home to harbor—exhibit this sense of scope and his acute awareness of nomenclature, his interest in naming all the fallen apples, calling on the movements of the ocean, and even ordering shoes just right on a family holiday. For Sae-young, smallness and the arrangement of small things represent something grand and gone, or perhaps something not yet come.

Night-Sky Checkerboard is a collection that lingers on a number of things, but namely the quotidian, and not for too long. Appropriately, it pushes beyond, carefully studying something as simple as a kite, the way that it has lost its way and fallen. Even when Sae-young does linger, he never overstays his welcome. His observations are astute, they dig through and onward into ontology.

A poem as simple as “A Kite,” the contents of which follow the title accordingly, still carries more than it seems. Sae-young starts with the beauty of butterflies riding the wind, and like the wind he swiftly changes course. Soon the promise of rising upward is tension taut and a snapping string. Soon the kite is gone from the sky, tattered. Broken. He searches for reason, for a who or a what, to explain the why.

I am unsure of their precise identity
but they had many names.
South wind, east wind, west wind, howling gale, tornado,
whirlwind . . .

Sae-young does this again and again throughout the book. As he calls the wind, naming it in all ways and directions, he warns and pushes his readers. “Never trust things with multiples names,” he says. The unforeseen draws the reader deep into his dark tree of taxonomy. Sae-young’s talent for otherness, unique pairings, and shiftiness is found in many of the pieces within the collection, but perhaps most poignantly in the poem “Power,” in which a snake emerges and where a poet, idle no more, proclaims that he has learned something important about himself.

The work’s narratives skip along carefully unkempt—leaves are human lives, the sky may simply be the ceiling, and cans in a case become convicts—but always Sae-young’s poems are breath-drawn and hush-hush. They are quick, careful flicks—wild boar, human bodies, feelings buried in the ground—and Sae-young wants them found, but not necessarily answered. He wants to get it all out, because inevitably, eventually, everything is worth opening, examining.

Sae-young wants to guide his reader, but he is stern and very much a teacher, and as teachers are want to do, Sae-young asks many questions. His interest in existence, in Buddhism, and in God greatly influence this tactic. His voice and the narratives found within his work often speak in parables. Like a good teacher, he challenges the reader to answer, to continually examine and unravel on their own.

He never gives an outright answer. Poems like “Hammer,” “A Rock”—even some of his earlier works, which are included briefly in a section towards the rear of the collection, such as “Music” and “Tears”—showcase his wise, lamenting voice—his ethereal way of helping, leading, and examining.

From start to finish, Night-Sky Checkerboard is questioning, somber, and beautiful. Readers will enjoy a flowering, artistic start as each piece is first presented in Sae-young’s native Korean with English translations following after. And though many of Sae-young’s poems start slow, he truly has a knack for and a keen understanding of how to finish. An end is good, satisfying, only when things all come together naturally. In “Waves,” Sae-young uses nature to satisfy, water to quench thirst. He writes about violence and beauty, and resolution. He writes that all things hard need not end so terribly. His repetition of the “good” over and over again feels firm, natural, and this book, like the sentiment found within that poem, is good, too.