‘The Unfinished World’ Will Crawl Under Your Skin

Northwestern University has a rock star on its faculty. No, not a rising star in science or medicine or women’s studies—an actual rock star. Freda Love Smith, the former drummer of The Blake Babies, Antenna, Some Girls, and The Mysteries of Life, goes incognito among the students she advises and instructs—or she did, until the recent publication of her memoir Red Velvet Underground (Agate Midway). Filled with stories from the road and about the transformative power of music, the book is framed by the year Smith spent teaching her college-bound son to rock a recipe or two.

Smith is once again drumming with The Mysteries of Life, which also features her husband, guitarist Jake Smith. She writes a column for Paste, in which she talks food and cooking with fellow musicians, and, yes, she’s teaching her second son to cook, too. In fact, with her new book, which includes some of her favorites recipes, she’s teaching us all.

I kinda want to spin some records with you. So…What album should we be listening to while we chat? (And a few words on why you’ve chosen it.)

Well, it depends. If you put on something with a drummer or guitar player I love (Levon Helm or Lindsey Buckingham) or by a songwriter I love (Liz Phair or John Prine), I will frequently stop to marvel and freak out and perhaps to aggressively insist you do the same. It will have a definite impact on our chat. I’m not a great multitasker. So we’ll have a better chance of staying focused if we choose something ambient, like Music for Airports by Brian Eno, or And Their Refinement of the Decline by Stars of the Lid (which is what I’m listening to right now).

I’m happy to freak out about Lindsey Buckingham anytime. What’s the first thing you remember cooking, either with someone or on your own? How did cooking become important to you?

My grandmother Violet is a central character in Red Velvet Underground, as she was in my life, and my earliest kitchen memories revolve around her. She had a nice, nonchalant way of involving me in her work; she’d give me a little biscuit dough to shape myself, or let me man the gravy with a spoon. The most exciting early memory I have of cooking with her was when she took me to a park to collect crab apples, which we took home and cooked into jars of jelly. That seemed like magic to me, that she knew what to do with something scattered on the ground, that she could transform it into something delicious. 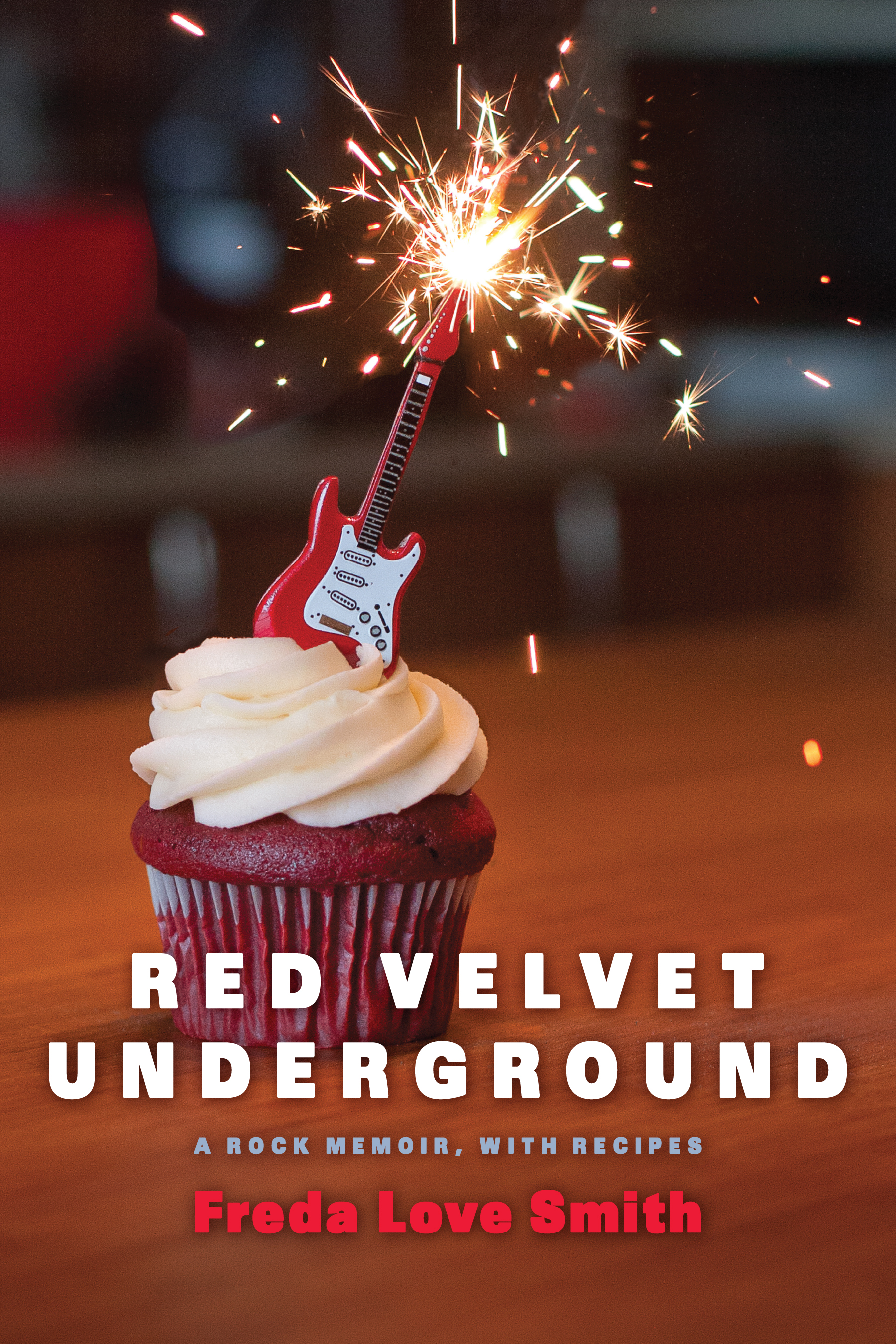 You’re a musician/writer/teacher/mom—and you managed to bring all those pieces of yourself into this one book. Can you talk about the process of how you wrote the book?

The book started off coming mostly from the mom piece of myself. It was a book about teaching my oldest kid how to cook before he went away to college, and gradually the rest filtered in. I was especially resistant to including my musical memories, at first, but they definitely wanted to be in there and once I allowed the book to be the inclusive mish-mash that it is, it actually made more sense, not less (which is what I’d feared). I was able to let these disparate threads in because I could rely on the framework of a year of cooking lessons as an organizing principle, and I could rely on the recipes and my food memories to connect the pieces of myself and parts of my life. More structure gave me more freedom.

Why was it so important to you to teach your son to cook?

I think that everybody should know how to cook at a basic level. What you eat largely determines the condition of your health, and (I’ll get a little militant here) it’s not a responsibility that ought to be placed entirely in the hands of a corporation or pizzeria. I wanted to make sure my sons had a handle on this life skill, and it was something I felt confident enough to impart on them. Of course I’ve failed them in countless other ways, but my kids can steam broccoli and roast a chicken.

What did you teach yourself, by writing the book?

Red Velvet Underground is my first book and the process of writing it was full of lessons. The most overwhelming of these was my realization that jumping in sooner than later is vital. It’s fun to think about writing a book and talk about writing a book, but these things have little bearing on writing a book. I figured out what I was writing by writing, by headlonging into it, often not knowing exactly where I was going. At some point you simply have to get off your ass (or on your ass, I guess?) and write a chapter and then another and another, ready or not.

I’ve approached everything important in my life this way: parenting, drumming, writing, teaching. My MO is to learn how to do things by doing them badly and in front of people. It’s a reckless but surprisingly effective way to learn.

There was a stretch of time where you didn’t play music anymore. What happened, and how did you get music back into your life?

I’ve stopped and started a bunch, and most recently I didn’t play for many years (six or seven, I forget exactly) and I assumed that part of my life was over. I sold my drums. My family moved to Evanston five years ago, and eventually I started to go out to shows and get my mind blown by the likes of Jason Narducy, Gerald Dowd, Nora O’Connor. Chicago is insane, an embarrassment of musical riches. It was inspiring, and I wanted back in on the fun but wasn’t sure how to make it happen. Then Robbie Fulks asked me if I’d do a one-off show with him at The Hideout. That was a year and a half ago, and I’ve been playing regularly since, including with my band The Mysteries of Life who just released an EP on Bandcamp.

Name a band or musician you’d love to cook for—and what you’d make to impress them.

I guess I’ll aim high here: I’d love to cook dinner for Ringo Starr! I think he’s vegetarian. I’m not a fancy cook. My best meals combine my nostalgia for the food I loved as a child (my grandmother’s southern cooking), with my later tendency towards healthy (ish) vegetarian cooking. Vegetarian comfort food, with a southern twist. I’d like to make him vegetarian biscuits and gravy (that recipe is in my book), or vegetarian “chicken” fried steak.

Have you named the vegetarian restaurant you’d open if you could?

I haven’t thought about this, but the question got me reflecting on a trend in naming restaurants . . . like 90s bands, they all seem to have basic single-word names (“Farm” “Cleaver” “Egg” “Table”. I might have invented some of those, but they’re all something like that). I’d like to see some longer, goofier restaurant names. And more puns. There’s a place in Evanston that’s been around for years called “Weiner and Still Champion.” That’s more like it! Although that particular name wouldn’t work for a vegetarian place.