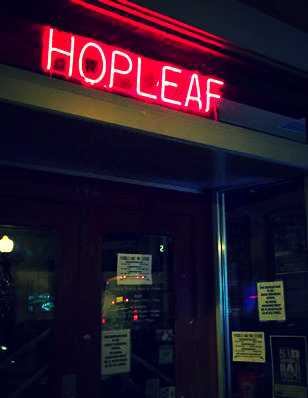 On the first Tuesday of every month, five writers gather at Hopleaf Bar in Andersonville to face their worst nightmare.

I’m exaggerating, but only slightly. I once watched an MFA candidate faint, mid-sentence, during a reading at the Book Cellar.

Tuesday Funk is one of Chicago’s most popular reading series, an “eclectic variety of fiction, poetry, essays, and other works in all genres, read live by the authors.” When I went to my first Tuesday Funk last fall, I expected a half-empty storage room over the bar. Instead, Tuesday Funk’s venue space looks more like a River North Starbucks. Every table was packed with people and stacked with drinks (and I don’t mean coffee).

One of Tuesday Funk’s cohosts is Andrew Huff, the founder and (former) editor-in-chief of the (late) Gapers Block. I recently spoke with Andrew about Tuesday Funk and the power of the spoken word.

Hearing a writer read his or her own work is a completely new experience for a lot of people. What makes it special?

I think it takes us back to when our parents read to us as children, or when our teachers or librarians did it in grade school. There’s a comfort in hearing other people tell stories, whether fact or fiction or something else. And by hearing a piece read by the original author, you gain insight into intent and tone through their inflection and emphasis that you might not see on the page or get from someone else’s reading.

Writers and readers can be slightly…agoraphobic. What benefits do you think communal events like Tuesday Funk hold for literary types?

For writers, it’s a great way to connect with an audience, both as a promotional tool and as a form of feedback. You can listen and watch for how the audience is responding. And it’s a good confidence booster for authors preparing for reading tours, too. For readers, it’s nice to get together in a welcome, inviting place and enjoy some literature in a low-pressure environment. There are few events more introvert-friendly than a reading.

How and when did Tuesday Funk get started?

Tuesday Funk was founded in 2008 by Connor Coyne as the official reading series of Gothic Funk Nation, a creative collective that has sadly disbanded. In addition to Connor, past hosts include Reinhardt Suarez, Hallie Gordon Palladino, Sara Ross Witt, and William Shunn.

I became a cohost in April 2013 when Sara Ross Witt departed and my friend Bill Shunn asked if I’d be interested, having read at Tuesday Funk a couple of times and attended many more.

What kinds of readers have you had in the past?

Tuesday Funk is billed as an “eclectic reading series,” and we stay true to that, bringing together nonfiction and fiction of all genres, as well as poetry, storytelling, and other literary forms. We’ve featured many well-known authors (Aleksandar Hemon, Wesley Chu, Lori Rader-Day, Daniel Kraus) as well as veterans of the live lit scene (Claire Zulkey, Darwyn Jones, Jeremy Owens, Britt Julious) and new voices. We carefully curate the shows to ensure a mix of styles and give readers a fairly generous time limit of eight to 12 minutes. As a result the quality of work presented is, I think, some of the best in the city.

Any particularly memorable readings or readers?

James Kennedy, author of The Order of Odd-Fish and founder of the 90-Second Newberry Film Festival, once brought a video presentation to run behind the sci-fi fantasy story he was reading, which made for quite a spectacle. And James Gordon — aka G.P.A., Greatest Poet Alive — was a newcomer who had won a Moth StorySLAM before coming to Tuesday Funk, and blew the audience away with his stories of bullying and unrequited love. He’s become a favorite returning guest.

What have you learned about the Chicago literary community from hosting Tuesday Funk?

I wasn’t quite aware of how genre-specific readings were in Chicago (and presumably elsewhere). It’s surprising how often we hear compliments about how diverse the show is in terms of styles and forms. And it kind of goes without saying that the size and breadth of the literary community is just astounding. There is so much talent in Chicagoland, and we’ve only scratched the surface.

Are you looking for new readers or is it by-invitation-only?

Tuesday Funk is always open to new readers. We try to book a few months in advance, so we’re currently looking for readers for late spring and summer. You can learn how to submit here: http://www.tuesdayfunk.org/participate.html.