After two years of physical and psychic anxiety and what feels like a permanent, unwanted reframing of our bodies in the world and in proximity to others, there’s something especially beautiful and necessary about Richie Hofmann’s A Hundred Lovers.

Wandering through this collection is similar to a luxurious meander through one’s favorite museum, with the plentiful white space on the pages framing the poems literally and figuratively. The beautiful cover by Chip Kidd celebrates the male form in marble—a material that is sensual, cool, and timeless—with poetry that is equally lush and visual. These poems are lightly related to each other; each encompassing a snapshot of the variations and vagaries of love, highlighting a magnificent queer eroticism.

Hofmann presents love—that whirlpool, whirlwind, and wandering emotion that makes life worth living and also ensures future anguish—in its many shades from Eros to Agape. His explorations—like the mythologies—aren’t cherubic, instead embracing both darkness and light. These poems are earthy and multisensory: “Every desire I had I wanted enacted— / on the beaches, in bathrooms, in train stations.”

Remember that the Erotes were a multiplication of the god Eros in Greek mythology, representing the different aspects of love, and these poems reflect many of those facets. Like the seasons, love is eternal, but also fleeting, so we are always cycling through the levels of infatuation, love, loss, and memory.

“The next day
we were men again: ironed shirts, knotted
ties of silk, deodorant, parted hair, promises:
We will have children.
We will buy another house.
One of us will get cancer.
All of our parents will die.”

There’s a beautiful dreaminess to many of these poems, which is not to say that the language isn’t precise, interspersed with verbal delights such as: “The sea frilled / like expensive lettuce”. Hofmann explores love in all its forms: ethereal, carnal, earthy. There’s something rather classical about this modern collection, the scents and sights of an eternal time overlaying the specifics of narrators’ love affairs.

Rilke, Mapplethorpe, Fauré, Celan, even Petrarch and his unrequited love for Laura, make their way into these poems, which address both the unattainable as well as what we have in the present. Woe be unto you if you feel you can control passion; but how cold and colorless a life if you shy away from it because of the inevitability of loss. Perhaps it’s no accident that the French term la petite morte is commonly considered to represent the loss of consciousness post-sexual pleasure, entwining love and death, in a circle of beginnings and endings. Hoffman is especially adept at linking the personal and the historical, turning the lens both inward and outward, and these poems offer artistic and emotional renderings in a temporally expansive manner.

“…The Black Death
feels distant, like you.
The medieval streets have been widened by
modern instruments of pain.
I look for a stranger with whom
to act out the gamut of jealousy, obsession, control—
until his body, like a soul, slips out from mine.”

Is love different depending upon our geography? Or on language? Or is it a language—a country, a time—of its own that we attempt to translate, excavate, understand, even as it evaporates like fog in the morning light. I read a quote from Roland Barthes that says in part: “The text you write must prove to me that it desire me. This proof exists: it is writing. Writing is: the science of the various blisses of language.” Hofmann’s themes and language seem to embrace desire—physical and artistic—in a similar way, as if he’s turning a crystal prism in different light settings. This spectrum includes society’s efforts to shame individuals for the desires they pursue, how “The history of this place / abounds with wounds.”

How do we combat such shame? By embracing love: “Eros enters, where shame had lived.” Here the poet—the creator of this world—values the snake and the apple as much as the garden, pushing back, creating a natural beauty from what may be a disappearing scar:

“Lately, something has taken hold
of me—not hunger, not shame. It is like a flower
blooming in the injury.”

Interrogating Expectations in “If an Egyptian Cannot Speak English”

In classical sculpture, as well as poetry, there’s an idealization of form and perfection, but Hofmann is especially interested in the fractures and edges of art and love, those that may make form even more beautiful in their singular nature. The cover itself offers a broken perfection, as if underscoring the beauty in what remains, unlimbed, yet still eternal.

Hofmann is equally interested in linguistic forms, such as the multiplicity of “yous” in French, which creates a parallel between the many yous we may love in a lifetime, always imperfectly, in varying degrees of repetition, how: “I will abandon you, I will come back.”

“The French language distinguishes
between the second
of two and the second
of many. Of course
we’d have other lovers. Snow fell in our hair.
You were my second lover.
Another way of saying this:
you were the other,
not another.”

I’ve always thought it ironic that Valentine’s Day is in winter, when fresh flowers are less available, with short days, often weathered briskly and brusquely. But perhaps that’s when we need to affirm love—and deny death—the most. Here’s a collection that stands out in contrast to the cold and barren winter, reminding us of the varieties of love and how critical it is to embrace it, in all its flaws. Hofmann writes:

To sculpt such a crafted, considerable collection: hard.
To immerse oneself in Hofmann’s world and words: easy. 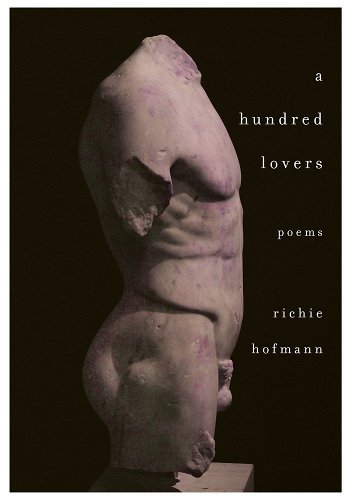