Should We Start Geoengineering Antarctica?

The epigraph of Jeff Jackson’s harrowing sophomore novel Destroy All Monsters invokes the ghost of Johnny Ace, the first historical rock martyr, an accidental gun suicide on Christmas Day, 1954. Like any number of musicians who died young, Ace’s early demise imbues his music with a posthumous sense of vitality. Whether through violence or accident or overdose, untimely ends yield relevance . . . except for when they don’t. Which variable is more potent: the music or the story? Tragically, the same might be said of the coverage of violence: does media coverage plant seeds waiting to bloom in concert halls, public squares?

Jackson wrestles with these questions in the fictional Arcadia, a town with a music scene bolstered by the Carmelite Rifles. Their TSOL-ish stage presence captivates and pollinates, a spate of bands forming in its wake.  After the band leaves town to seek fame and fortune, a young musician named Shaun, duly inspired, starts a band, records a seven-inch, and plays in front of a hometown crowd at a club called the Bunker. Then violence cuts down the young surge, and it’s not limited to Arcadia: a wave of concert shootings decimates unheard music scenes. Over and over again, unheralded bands are shot while onstage, playing in tiny towns.

Jeff Jackson has spent time in and around music scenes, including Charlotte, North Carolina’s. His writing on bands is keen and never overwrought, focusing on the interdynamics that make novels and documentaries about bands so captivating, as well as the fan perspective, where even in the internet age, apocrypha and rumor still swirl and subsist.

It’s this fan perspective – interlaced with the band point of view – that drives Destory All Monsters’ narrative. The ad hoc protagonist, after a series of narrative shifts and false starts, is Xenie. She appears in the shadows of the legendary Carmelite Rifles show, where she meets Shaun. After his untimely demise, the survivors of Arcadia’s music scene reconfigure.

Xenie notes “Most of the people I know are in bands. All those so-called creative people are always telling me to join these groups or start my own. They’re always trying to get me to see their shows, listen to their songs, buy their stuff. It’s like everything has to be public, everything has to be validated by a crowd, or it doesn’t exist.”

In support of this idea, the ever-changing constellation of musicians in Arcadia reconfigure into a new band and plan a memorial benefit. Xenie lurks the outskirts, “An unwelcome reminder of the town tragedy.” She watches the preparations for the show, ingraining herself with a band comprised of Arcadia’s survivors. At the show’s venue, the eerily named Dead Echo, a trapdoor is installed in the middle of the stage for easy escape in case of shooting, and heightened security nervously awaits.

Xenie notes that “(t)he killers wanted music to matter again….they wanted to purify it. It’s like they were tinning the herd, putting wounded animals out of their misery.” Certainly the amount of music out there has increased with the advent of Bandcamp and Soundcloud – the old adage that anyone can form a band is more a truism now than ever. Cynics might say that the old snap shares a similar truth: everyone can form a band, but not everyone should.

Jackson summons the ghost of the dearly departed rock critic Lester Bangs in his depiction of the climactic show. As audience and readers wait with baited breath, Jackson recalls Bangs’ seminal essay “Of Pop and Pies And Fun,” in which Iggy Pop and the Stooges bash away with abandon and make jackasses of themselves. This foolishness, Bangs says, is the point: too much of rock music is empty posturing and worship. A band must do whatever it takes to move their audience, to genuinely affect them – even if it means utterly debasing themselves. Xenie, the scene’s specter, does this by dressing like Shaun, lip-syncing his songs for the crowd, while onstage, singer Florian strips naked, wearing a target, imploring the audience to shoot him, to break the ritual by continuing it.

This nudity isn’t fans throwing pies at Iggy Pop in the sixties, as Bangs wrote about, but it serves the same purpose: in “Of Pop And Pies And Fun,” Bangs makes the point that initially rock music was all about anyone being able to bash out “Louie Louie” – music is democratic in its simplicity. Or was, before the advent of prog, of Clapton and Jimmy Page and Jeff Beck. By making fools of themselves onstage, by baring themselves, the Stooges were saying “you can do this.” Florian and Xenie, similarly, make spectacles of themselves to jolt the audience out of ritual – as the tragically departed singer of the Minutemen D. boon reminds us, real names be proof. Real displays can impact. Violence doesn’t have to be an accepted art – things can change. Can be changed. This notion is further evidenced by the novel’s rock nerd structure: an alternate reality unfolds when one flips the book over, a b-side with the same characters living an alternate reality.

With so much exposure, so many pings and notifications, boxes full of emails waiting to be annihiliated like weeks, Destroy All Monsters rails against its own titular notion – it’s better to create than destroy. Its sharded optimism is a balm for these increasingly fractious times. 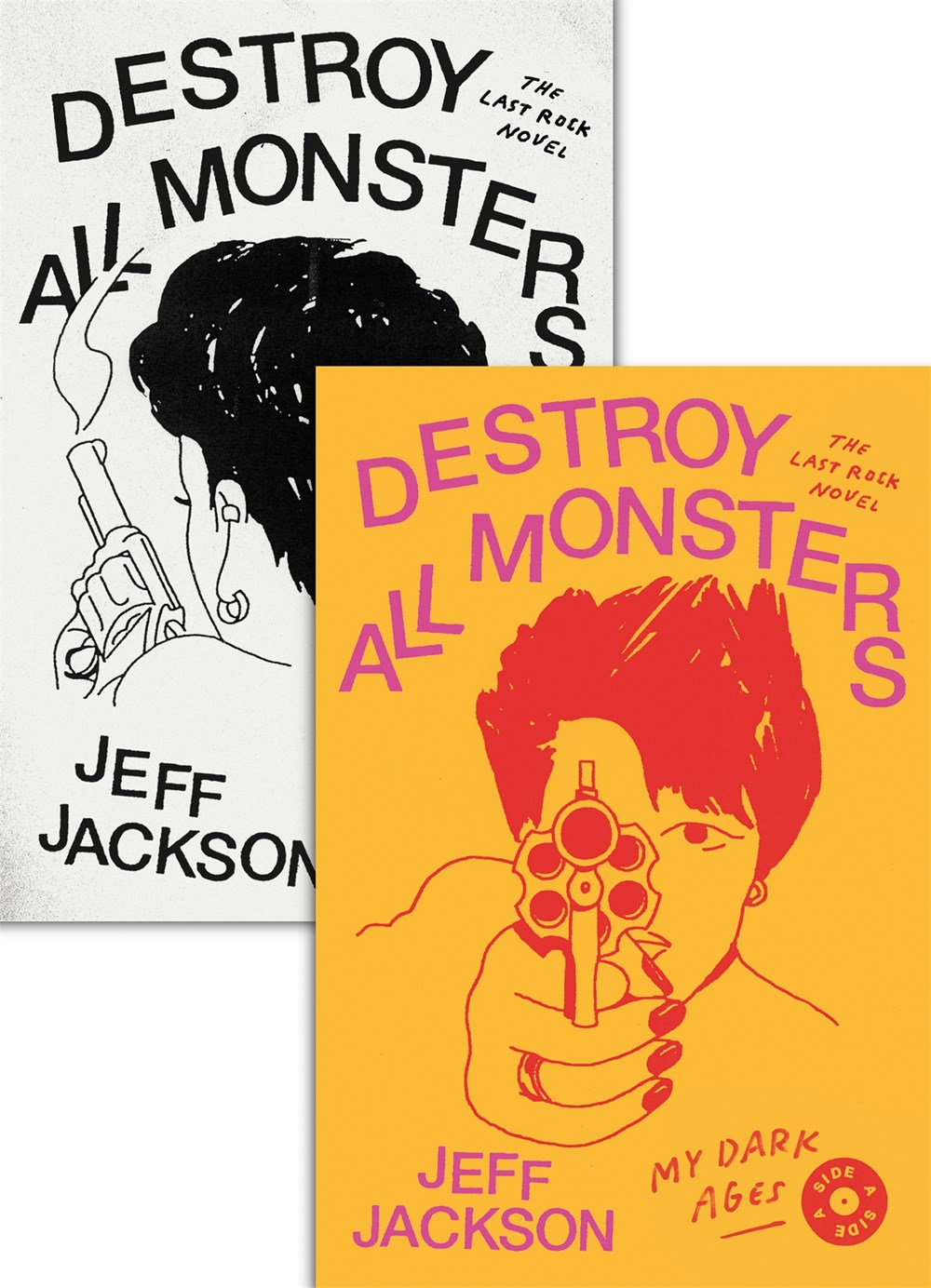 Jeff Jackson is the author of Mira Corpora, a finalist for the Los Angeles Times Book Prize. His short fiction has appeared in Guernica, Vice, and The Collagist, and five of his plays have been produced by the Obie Award–winning Collapsable Giraffe theater company in New York City. He lives in Charlotte, North Carolina.