‘The Third Hotel’ Is an Otherworldly Force Unto Itself

In 2013, Claire Messud was asked by an interviewer if she’d want to be friends with one of her bitter protagonists. “For heaven’s sake, what kind of question is that?” Messud replied. “If you’re reading to find friends, you’re in deep trouble.” The exchange kicked off a debate about “unlikeable characters,” a concept that frustrates most authors, especially since — as Messud pointed out — readers are more likely to complain about a character’s likeability if the character is a woman.

Part of what’s so irritating about the idea of “unlikeable characters” is that that it confuses two different questions.

Many nice people are dull as dirt on the page (why do you think Facebook has an “unfollow” button?), while literature is full of morally questionable assholes that are a pure delight to spend time with. Who you’d “like to have a beer with” isn’t a great way to elect presidents or create characters.

If you’re the type of reader who is looking for friends, Ottessa Moshfegh is probably not the writer for you. Ottessa Moshfegh’s oeuvre reads almost like an attempt to see just how “unlikeable” characters can get. To be clear, I mean that as a compliment. Her works so far have featured a possibly murderous drunk (the underrated novella McGlue), an ugly-inside-and-out secretary who hates everyone and everything (the PEN/Hemingway-winning and Man Booker-shortlisted novel Eileen), and a host of enjoyable nasty and cranky protagonists in her excellent short story collection Homesick for Another World. Each of these books has been well-reviewed, even as critics have sometimes balked at the misanthropy and frequent descriptions of bodily excretions.

In public, Moshfegh seems to delight in undercutting her own fans and acclaim. She’s described her stories as “like seeing Kate Moss take a shit” and bragged that she started writing Eileen just to prove “how easy [it] is” to write a successful thriller. She’s blunt about her opinion of her own talent: “I’m not going to be making cappuccinos. I’m fucking brilliant!” Readers will have as strong a reaction Moshfegh’s author persona as they do her characters, but for me at least, it is a refreshing change from an era dominated by false humility and the accumulation of social media “likes.”

In her new novel, My Year of Rest and Relaxation, Moshfegh pushes the question of how “unlikeable” a character can get even further. The story follows a rich young white woman in New York City at the turn of the millennium who is so over existence that she decides to take as many drugs as possible and sleep life away.

While misanthropic characters often make up for their nastiness though their creativity, righteous anger, or unfortunate life circumstances, Moshfegh eschews all that. Her narrator is rich, beautiful, boring (to herself at least) and bored. She is not driven by political awakening or artistic ambition. She’s not going to check her privilege, she’s going to write checks with it. (“I was born into privilege,” she tells her artist friend Ping Xi. “I am not going to squander that. I’m not a moron.”) She doesn’t seem fond of anyone, and certainly not her best friend or dead parents. She wants to sleep life way because she’s tired of the world as well as her own dull thoughts and “lame memories.”

Of course, just because the character finds her thoughts and memories unremarkable does not mean that the reader will. The narrator is an enjoyable hater whose observations are both caustic and insightful, such as describing a friend as someone who “masturbated with an electric neck massager because she was too embarrassed to buy a proper vibrator from a sex shop.” The narrator delights in her insulation from the world and her ability to avoid the struggles and problems of other people: “This was the beauty of sleep — reality detached itself and appeared in my mind as casually as a movie or a dream. It was easy to ignore things that didn’t concern me.”

Seen through the eyes of the narrator, every other character is eminently hateable. Her best friend Reva is a vacuous moron who can only conceive of her nihilistic dropping out as a capitalist feminist “leaning in.” (“I’m not making a career move,” the narrator retorts). Her on-and-off boyfriend is a finance bro rapist. Her doctor is a cartoonish quack, her other friend “an art-world hack,” and her parents are nothing to write home about.

Still, one of the only times we see the narrator exhibit an emotion that isn’t boredom or hate is when her father is dying: “I sat on the chair and cried while my mother got drunk in the kitchen, ducking her head in every now and then to see if he was dead yet.” The novel doesn’t really show us why the deaths of her parents affected her, nor flesh out the father (who the narrator “barely knew”) as characters. But the grief is a dark liquid bubbling under the narrator’s year of “rest and relaxation.”

What does that rest and relaxation consist of? Largely drugs—most real, one invented—and watching bad TV and popular movies. As she increases her doses with the help of a quack doctor named Tuttle, she starts to make “blackout trips to the bodega” and wakes up with “popsicle sticks on my pillow, orange and bright green stains on my sheets.” Soon, she’s sleepwalking the life of a rich party girl. She does everything from going clubbing to getting her pubes waxed while unconscious. Her “friend” Reva checks on her, worried, but the narrator is annoyed by her presence and treats her callously. “Don’t be a spaz,” she tells Reva when Reva’s “mother’s cancer spread to her brain.”

While plot is not the primary driver of a novel like My Year of Rest and Relaxation, the story does spin its wheels a bit in the middle. The narrator starts out taking drugs and sleeping all the time, then progresses to taking more drugs and sleeping for longer amounts of time. About halfway through the novel, the scattered references to time make you realize the novel is building towards 9/11. This is a bold move for a book about being detached from everything, but without spoiling the ending, I’ll say it delivers.

My Year of Rest and Relaxation has more stripped-down prose than some of Moshfegh’s other work, though Moshfegh still delights in lyrical beauty even when describing the ugly. Seeing a dogwalker: “The dogs skittered across the wet blacktop as silently as cockroaches, each so small it amazed me they hadn’t been squashed underfoot. Easy to love. Easy to kill.” On vomiting up medication: “Let them go, I told myself. Besides, two Benadryl were a joke. Like blowing a snot rocket at a forest fire. Like trying to tame a lion by sending it a postcard.”

The narrator’s refusal to exist calls to mind works like Herman Melville’s classic “Bartleby, the Scrivener” and Han Kang’s recent masterpiece The Vegetarian, both of which feature characters who say, “I would prefer not to” and fade away from life. But while those characters suffer awful consequences, Moshfegh’s narrator is cocooned in wealth and privilege. This has led some critics to frame the narrator as a savage satire of privileged white women, and others to hail her as a feminist hero who decides it is better to sleep away than lean in. Perhaps she is both.

For all the narrator’s nihilism, she is aware that her life can’t continue to be this empty. “I was growing less and less attached to life. If I kept going, I thought, I’d disappear completely, then reappear in some new form. This was my hope. This was the dream.” She may be an unlikeable character, but she wants to be something different: a character who is a better person, if a whole lot less fun to read. 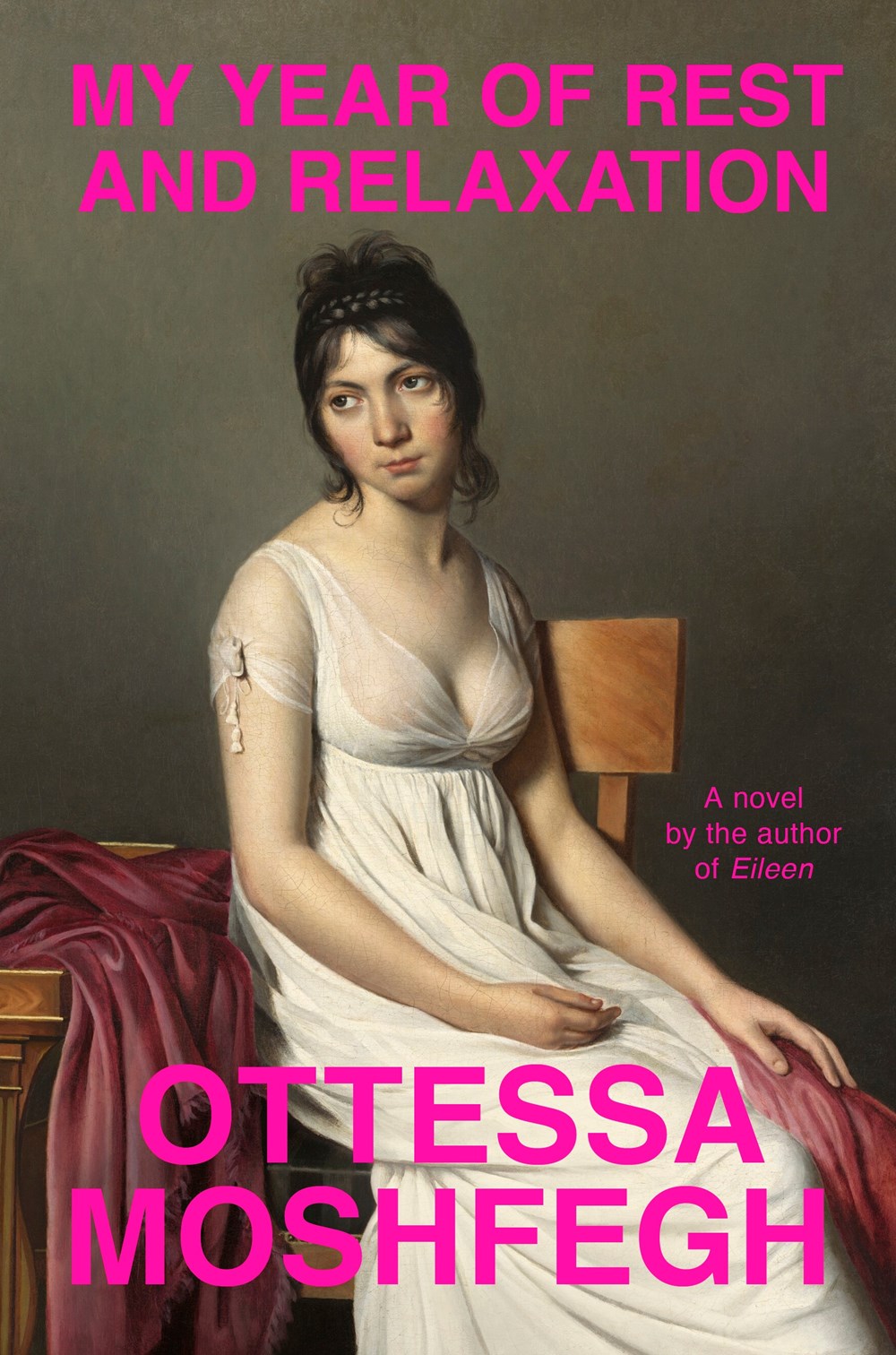 The Mechanics of Visibility in “All the Secrets of the World”

My Year of Rest and Relaxation

Ottessa Moshfegh is a fiction writer from New England. Eileen, her first novel, was shortlisted for the National Book Critics Circle Award and the Man Booker Prize, and won the PEN/Hemingway Award for debut fiction. She is also the author of the short story collection Homesick for Another World. Her stories have been published in The Paris Review, The New Yorker, Granta, and have earned her a Pushcart Prize, an O. Henry Award, the Plimpton Discovery Prize, and a grant from the National Endowment for the Arts. Her first book, McGlue, a novella, won the Fence Modern Prize in Prose and the Believer Book Award.

Lincoln Michel is the author of the story collection Upright Beasts (Coffee House Press 2015) and the co-editor of the science fiction anthology Gigantic Worlds (Gigantic Books 2015) and the flash noir anthology Tiny Crimes (Black Balloon Publishing 2018). His fiction appears in Granta, Tin House, NOON, Pushcart Prize XXXIX, and elsewhere. His essays and criticism appear in journals such as The New York Times, GQ, Rolling Stone, and The Guardian. You can find him online at lincolnmichel.com and @thelincoln.