What Does a Poet Actually Do?

Everyone knows the painful feeling of being trapped at a family dinner with nothing to say. But few would be compelled to memorialize it in poetry.

Kimiko Hahn’s Brood is engaged in this very project of turning the universally mundane into the uniquely beautiful. The tenth poetry chapbook from the president of the Poetry Society of America displays the award-winning poet’s characteristic affinity for playing with common tropes of perception and self-understanding, and the quiet delights to be found in the unusually strong application of attention to the smallest of details.

Brood is a short, pocket-sized chapbook of poetry that reflects on the feelings of loss, uncomfortable silences, and the hidden stories buried in our everyday objects. New works from Hhan are interwoven with a number of her previously published poems. Yet the small size of the compendium does not translate to a lack of emotional heft. The tragic death of a mother; a father’s abuse, and covert political subversion all feature within the short, staccato verses in Brood. The overall effect is a hypnotic mediation on the pleasures of paying attention to the world around you.

Hahn’s previous poetry book, Brain Fever (2014), was inspired by articles in the New York Times Science section. It weaves a clinical attention to detail that’s common among the sciences into a range of philosophical queries about everyday life. Likewise in Brood, the smallest objects become deeply entwined with the most pressing existential questions in the universe. “Damselfly,” the opening poem, offers a self-improvement spell by way of freeing an insect:

When you spot a damselfly
Caught in a spider’s thread
Blow gently to release its wings
And so, unknot your dread

Here, objects and insects become metonyms for states of pathos. A plastic, tortoise-shell brush brings to mind a mother’s death; clouds, the memory of a particularly dissatisfying boyfriend. Kikkoman soy sauce is proof of having once had a home – or at the very least of once having had a father. Then there are further “Damselfly”-like incantations, spells for personal enrichment that rely on the help of the world’s smallest critters. Helping a horseshoe crab find its legs will bring one “trustworthy love;” pulling out the poisonous growths in a wildflower is a sure way to best one’s rivals.

The overall effect is poetry that cuts to the raw emotionality of familial life–the melancholia of emotionally austere families, fathers who seem too distant, and daughters who don’t see or talk to you as much as they should. Yet in Brood, these reflections do not slip into saccharine sentimentality or self-abasing despair. Instead, by mapping how the “external” world maps onto our “internal” emotions through experimental, chopped verse, Hahn conveys the very complexity of these feelings and precisely points to how they can escape concrete articulation. The work thus runs up against the very constraints of language. It is said that a picture contains a thousand words; objects, as pictures, can contain a thousand memories, all of which cannot be contained in the strictures of language.

Hahn is a fan of the “zuihitsu” poetry, a Japanese form that privileges loosely connected, stream-of-consciousness writing over tightly-wound prose concentrated around a single subject. The form is on full display in Brood. A mother flits from being alive, to being dead, and then alive again within a few verses; Hahn is not concerned with heeding the linearity of time. Scents and objects linger within the universe long after bodies have decomposed, as unwittingly important proof that someone had really once lived. It is a clever and subtle dig at the self-involved confidence of the Cartesian self, that lasting tenet of Western philosophy that believes there is a strict and clear delineation between the wise, self-man “thinking man” and the untamed, unknowable mysteries of his exterior world.

Instead, Brood proposes that there is no such clear divide between our internal selves and the exterior universe at all. We are the sum of external experiences, objects, and our relationships in the world around us—yes, even interactions with the smallest members of our universe, such as horseshoe crabs and wildflowers: “Mother, a dozen years dead but still this flight of scent:/ spearmint gum, a leather clutch, sesame bath-oil beads.” The stilted silence of familial angst finds a worthy adversary in the loud confessionals embedded in our objects’ histories. Hahn’s poem encourages us to look to our most unassuming neighbors—and in them, find ourselves.

Guilty of Consenting in “Hysterical” 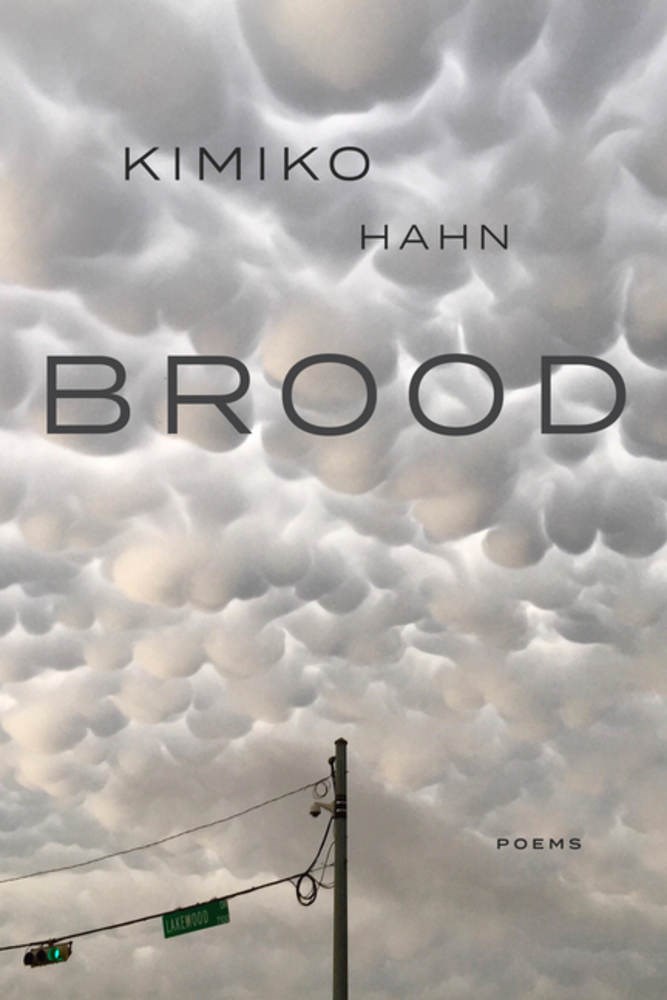 Kimiko Hahn is the author of nine books of poetry, including The Artist’s Daughter (2002), The Narrow Road to the Interior (2006), Toxic Flora (2010), Brain Fever (2014), and most recently, Brood (2018). She is the winner of the PEN/Voelcker Award for Poetry, the American Book Award, and the Shelley Memorial Award from the Poetry Society of America. She has also been award fellowships from the New York Foundation for the Arts, the Guggenheim Foundation, and the National Endowment for the Arts. Hahn teaches in the MFA program at Queens College. In 2016, she was elected president of the Poetry Society of America.