Florida, it appears, is having a literary moment. Even Sam Pink — the most Chicagoan of all Chicago writers — moved to Florida and wrote a book about it, his new White Ibis. But of course, the ibis is only half the story.

Pink’s new book, just out from Soft Skull Press, is a neat little double book containing both The Garbage Times and White Ibis. The Garbage Times is a more typically Pink creation, about a barman who lives in (where else?) Chicago and spits out lines like “best to just shut the fuck up and do what you had to do.” Ibis, on the other hand, features an artist narrator who escapes Florida with his girlfriend and ends up falling in love with the lush landscape and weird wildlife. (Like Scott McClanahan, Pink and his narrators are often conflated and combined in almost-not-quite autobiographical ways.) 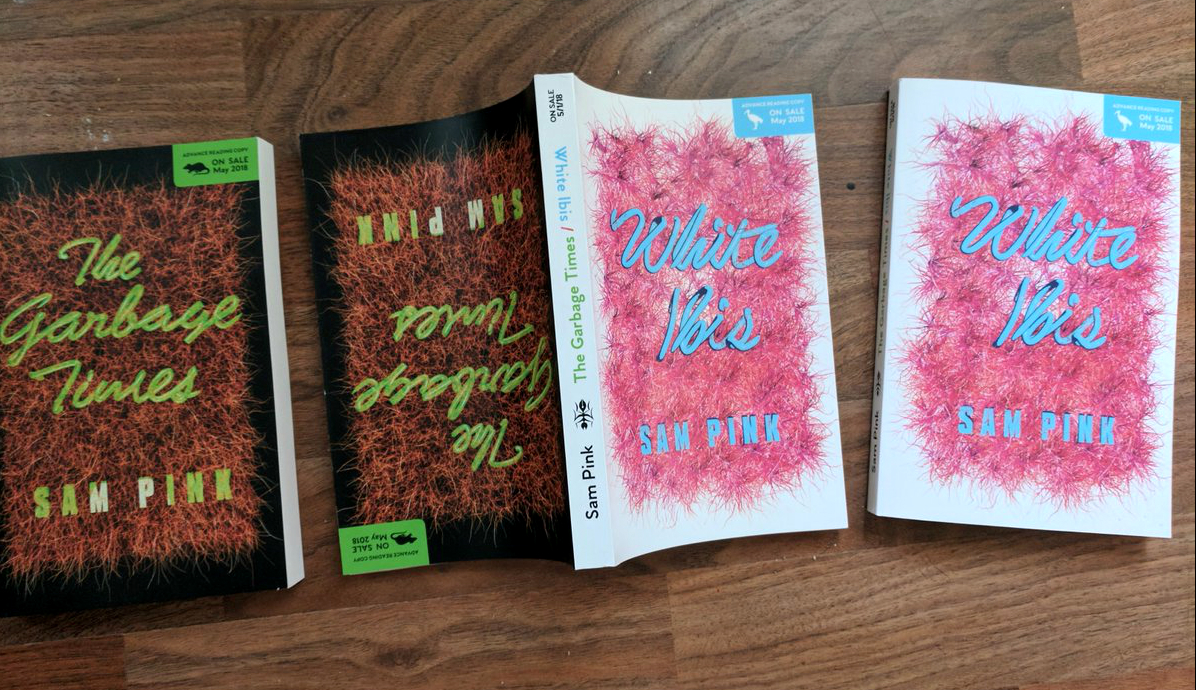 I first discovered Pink on the internet eight or nine years ago, which there was a distinct vogue for writing that featured a nihilistic narrator, flat, unadorned prose, and a high degree of interiority. Most of these stories and books were mediocre or bad; the style was so (seemingly) easy to imitate and the subject matter so often autobiographical, or nearly so. And of course, a lot of those writers were part of the alt-lit world, which rather famously imploded on itself in a cloud of harassment, sexism, and generally terrible behavior by a lot of young male writers and editors.

Pink’s work emerged from that time and from the general orbit of that alt-lit crowd, but his talent, originality, humor, and subject matter lifted him above the alt-lit classification and made people like me solid fans. He wasn’t writing, like so many alt-lit kids, boring fiction about being bored in an upper-middle-class life and doing boring drugs in a boring bedroom. He was writing – has always been writing – about people on and outside the margins of society. “Garbage” people, garbage times; poor people and homeless people and addicts and prostitutes and barflies and neurotics and violent people, lonely people – even literal garbagemen. He writes “Any job I’d ever had involved garbage.”

The work has always been squarely centered, like Pink, in the kind of cramped, cold, concrete Chicago, where, as Pink writes in The Garbage Times, “There was no escape from dirt. If you remained in motion your whole life, it still buried you.” Nihilism reigns, not out of fashion or ennui but out of sheer brick-wall experience. I picture all of Pink’s Chicago narrators permanently wrapped in a shit-colored coat. The Garbage Times basically picks up where his last book left off, with a narrator angrily and humorously imploding, mostly in his own mind. It’s a very good, solid novella, and full of terrific Pink passages like this one:

“There was puke on one of the seats and the window behind it—like someone not only puked, but his/her head filled with puke, then exploded.

Fuck yeah, that’s how you do it.

It was the garbage times.”

But The Garbage Times are followed, almost giddily, by the up-and-away of White Ibis. And in this book, Pink has done something so new, so different, that I’m struck by what a stroke of genius it was to put the Chicago book right up against it for contrast. Up against his cramped vision of Chicago, the Florida book is so expansive, so wild and lovely, so full of normal-ish people and exotic animals and the oddest thing of all in a Sam Pink book—a fleeting inner calm that almost borders on happiness.

In Ibis, Pink’s artist narrator and his girlfriend flee Chicago for a while to live near her family in Tampa. He gets right to work there detailing the oddities of his surroundings, including his love for the misfits he meets. All par for the course. But there’s a sense of possibility that opens up out of nothing more than pulling up a driveway in a new city, one home to a dizzying array of wildlife. Animals are nothing new in Pink’s work—he’s always having imaginary dialogues with dogs and rodents. But these aren’t animals he pities or despises, these are animals that seem to capture another place entirely, to serve as the alien inhabitants of a planet that Pink sees as goofily beautiful. “Gawky-ass, ornate birds, just walking around,” the narrator says, with obvious pleasure.

In White Ibis, we get the improbable and wonderful juxtaposition of a Sam Pink narrator hanging out with normal people, chilling with his girl, dealing with the theme park that is Florida. For the narrator, there’s at first a resistance to what he sees as the central mission of Florida – to force him to have fun. His inner monologues hilariously narrate the inherent disaster he sees in a simple children’s birthday party or a country club shindig. But Florida is changing him, even if he doesn’t see it at first. His scene may never be domestic bliss, but the landscape of Tampa — particularly that totem white ibis — gradually force a kind of grudging recognition that one can be inspired by, not just act on, the world. In one scene, he’s worrying about a party thrown by his girlfriend’s parents, when “I saw the white ibis, in my rearview, at the end of the driveway, tiptoeing around like a dumbass.” He watches the bird, appreciatively, and puts himself firmly in the wild camp when declaring “there was basically no way you could get the white ibis to go to this party. No, fucking, way.”

The world is in chaos, the internet has made us all haters, and our president is a racist toddler. There’s not that much to celebrate in the human world, and yet that’s precisely why White Ibis is so powerful and so full of hope. It’s small relationships, animals, the odd details – those are the things that have always saved Pink’s narrators from total ruin in his previous works. And in White Ibis, they are the things that finally seem to be paving the path for if not happiness, then at least a landscape stretching out past the point that we can see. 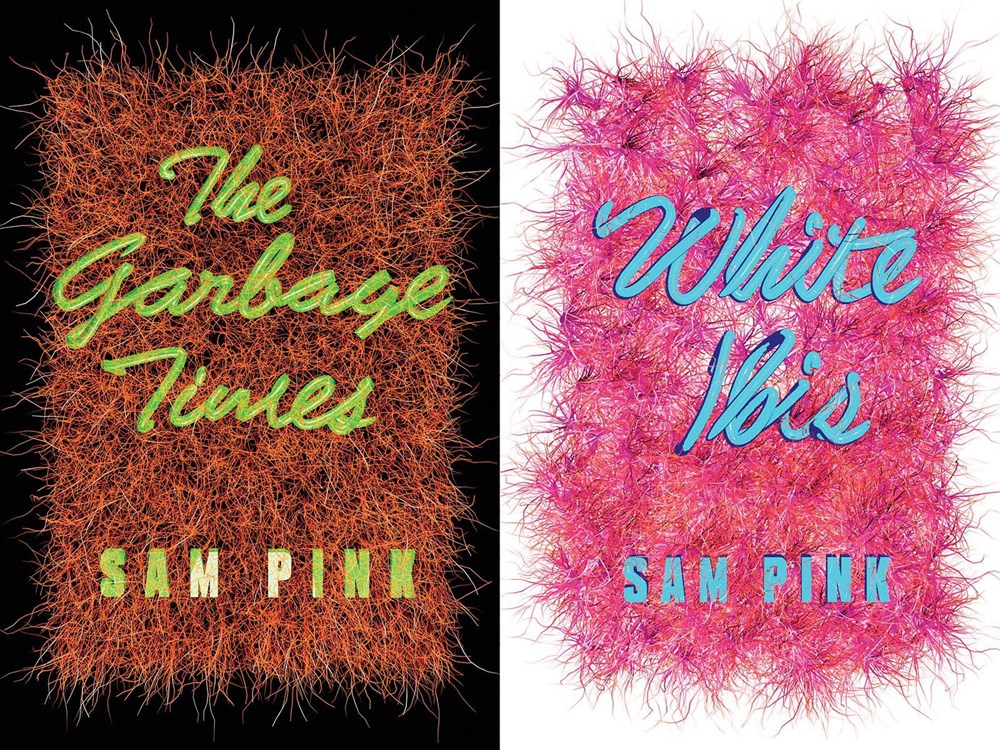 Sam Pink‘s books include Witch Piss, Rontel, Hurt Others, The No Hellos Diet, and Person. His writing has been published widely in print and on the internet, and translated into other languages. He sells paintings from instagram.com/sam_pink_art.

Amber Sparks's work has been featured or is forthcoming in various places, including New York Tyrant, Unsaid, Gargoyle, Annalemma and PANK. She is also the fiction editor at Emprise Review, and lives in Washington, DC with a husband and two beasts.

Rumors, Aliens, and Disarray in “People From My Neighborhood”