Poetry as Creative Freedom: An Interview with Dustin Pearson

Burning Worlds is Amy Brady’s monthly column dedicated to examining trends in climate fiction, or “cli-fi,” in partnership with Yale Climate Connections. Subscribe to her monthly newsletter to get “Burning Worlds” and other writing about art and climate delivered straight to your inbox. Photo by Kalyaní-Aindrí Sánchez.

For this month’s column, I spoke with Sam J. Miller, author of the thrilling new novel Blackfish City. This book, like Kim Stanley Robinson’s New York 2140, looks to a future time when Earth has been ravaged by climate change and humanity is barely hanging on. But unlike Robinson, Miller imagines New York City long gone. In fact, most of the world’s epicenters are gone, and in their place is a new metropolis called Qaanaaq. It’s a floating city in the Arctic Circle, a last bastion of civilization after the so-called “Climate Wars.”

But no matter how great its technological advancements, the city is starting to fray. Crime is on the rise, the wealth gap is growing, and a mysterious disease called “the breaks” is spreading faster than doctors can study it. Among those just trying to get by are Fill, a victim of “the breaks;” Kaev, a professional fighter hired by a crime boss; Ankit, an assistant to a local politician; and Soq, a gender-fluid “messenger” who travels around the city, looking for a better way to spend their time.

The lives of all four characters are shaken up when a strange woman riding an orca arrives in town. She keeps by her side a polar bear with its head and paws caged. The city is captivated by the sway she holds over the animals, and by her impressive—if terrifying—fighting skills. What follows next is a timely, engaging, imaginative, and ultimately hopeful novel about the importance of human connection in an era of great uncertainty.

I spoke to Miller about what inspired Blackfish City, his thoughts on the future of both American patriotism and gender identity, and why climate change should be considered the biggest threat of our time.

Blackfish City speaks to so many contemporary anxieties about climate change, technology, and ideological radicalization. What inspired you to parlay all this into fiction?

These are the things that keep me up at night — or fill me with blind idiot rage when I hear the news at the doctor’s office or the diner — or keep me scrolling endlessly through my Facebook feed in a haze of horror — and leave me feeling sad and scared and helpless. Most of my fiction work is me trying to make sense of something I don’t understand, or see the humanity in someone I find monstrous. Blackfish City is definitely me trying to turn my fear into hope.

In my conversations with other writers who tackle climate change, I’ve learned than many have an “oh crap” moment when it comes to issue. What was yours?

I couldn’t pinpoint one particular moment — it’s always been there buzzing in the background, along with all my other existential fears, dating back to when I was 16 and Wal-Mart put my family’s small-town butcher shop out of business, and I got radicalized hanging out with hot vegan boys, and learned about factory farming and animal rights and racism as a function of capitalism and the greedy way corporations were destroying the planet for profit. I think that Hurricane Katrina was a particularly horrifying illustration of how climate change is only half the story — it isn’t JUST that natural disasters will get worse, it’s that they’ll get worse in a context of toxic political systems, so that marginalized and oppressed people will get hit the hardest. It was the same with AIDS, another one of my horrified fascinations that I’m exploring in Blackfish City. There was the disease itself, which was deadly, but because it hit queer people and people of color and sex workers and active drug users hardest, governments ignored it, and religious leaders welcomed it, and people died in massive numbers while the world looked the other way.

One of your characters travels with two animals — an orca and a polar bear. In the real world, both of those animals are nearly synonymous with environmentalism. Is it fair to say that they’re doing some symbolic work in your novel?

Perhaps, but mostly I just picked them because they are awesome! And because humans have imprisoned orcas and pushed polar bears towards extinction — so I wanted to turn the tables a little, and have the killer whale and the polar bear kill a bunch of people. And I know that in real life they’d murder me, so I wanted to imagine a world where we could be friends. What is fiction, if not wild wanton wish fulfillment?

I love that your book features multiple characters with queer identities, and that their queerness is treated so matter-of-factly by everyone in Qaanaaq. Do you think we’re headed toward a future where queerness will be better accepted by the general public?

We’re definitely headed in that direction, but it’s a mistake to believe that we’ll someday reach a point where everything will be great for everyone. Progress is not a solid line; there will be backlash and pushback and irrational resurgence of bogus beliefs… So, as much as I want to envision a future where we’ve broken out of the box of the gender binary, it was important to be real about the fact that some people will choose to stay inside that box. There are still some folks in Qaanaaq who are irrationally threatened by Soq’s magnificent mere existence. There will always be assholes.

One of the more heartbreaking aspects of your novel is your depiction of American patriotism. You suggest that it is so strong, that it will convince some people to stay in the United States, even after the country as we know it falls apart in the wake of climate and political disaster. Would you expand on your thinking about this? Is patriotism the enemy of political action? Of climate action?

I don’t know if patriotism itself is a negative — nationalism has played an important part in so many liberation struggles, from Indian independence to the African-American Civil Rights Movement. But it can also be exploited to rally people behind a violent far-right agenda: like, say, if a fascist politician wraps himself in an American flag and calls foreigners rapists and gets elected president. Same with religion: It can be a beautiful thing that gives meaning to people’s lives or helps them through hard times or informs their work for social change, but it can also be a justification for atrocity.

Right now in America, rather than grapple with our own problems, and make difficult decisions to change our own behavior, we are doubling down on destructive idiotic short-sighted policies. There is definitely a toxic far-right face to patriotism in America that’s very visible and very vocal, and it is inseparable from racism and xenophobia and homophobia and transphobia. At this point in history it’s difficult for me to see patriotism as a force for good; if we continue on in the direction we’ve been going, patriotism will continue to be the motivation for apocalyptically bad decisions.

What role, if any, do you think novels can play in getting people to think more seriously about climate change?

I would love to believe that a book can change minds, turn unbelievers into activists, and maybe it can. I try to write characters who straddle the line between being terrible and wonderful, in the hopes that people will follow their arcs and maybe grow from ignorance. But my primary responsibility as a storyteller is not to the people who hate me, or who are fighting to keep the world from becoming a better place, including resisting efforts to ameliorate climate change.

At the end of the day, I write for my people. For all my people: The ones resisting oppression, and marginalization, and patriarchy, etc. So for me, the role a novel can play in the fight against climate change is to give strength and hope and inspiration to the people who are fighting for a better future. I want people to see that we can fix problems, and change things, and that even if terrible things happen in the future we will survive, and thrive, and learn, and grow. 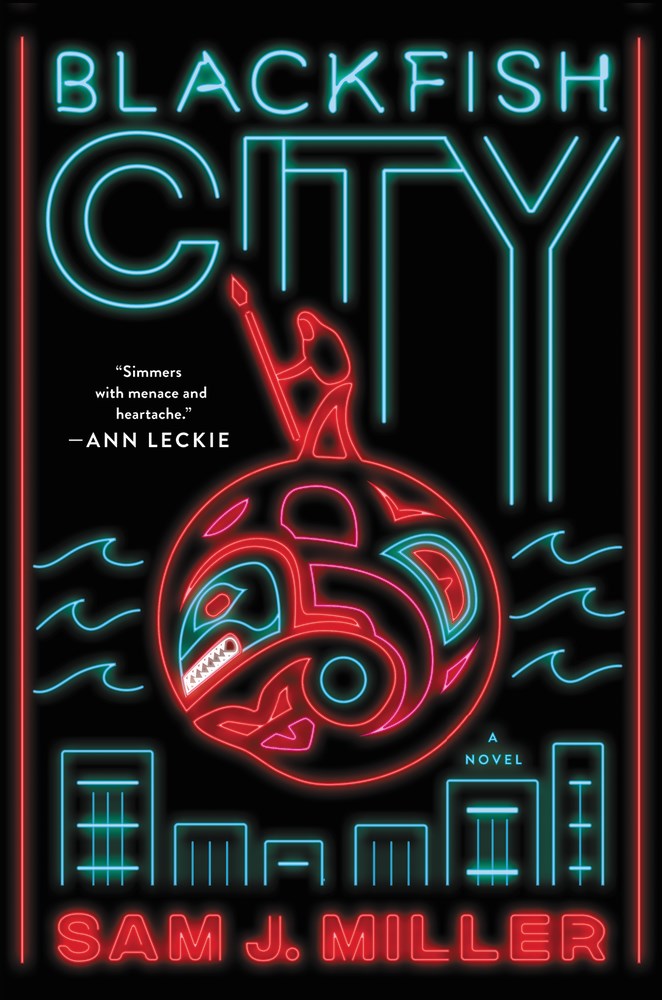 Sam J. Miller is the author of the YA novel The Art of Starving. His short stories have been nominated for the Nebula, World Fantasy, Theodore Sturgeon, and Locus Awards, and he is a recipient of the Shirley Jackson Award.

Water Scarcity and the Climate Crisis in “Stillicide”