America’s First Female Detective Was a Chicago ‘Girl in Disguise’

Recent conversation in the world of poetry revolves around Instagram poets, a group of writers like Rupi Kaur, Lang Leav, and Amanda Lovelace who gained massive followings on the social-media platform and who garnered what many would consider astronomical success. As Carl Wilson explains in New York Times, while John Ashbery’s publishers would be glad to sell 10,000 copies, Rupi Kaur sold 1.5 million books. The success of such authors is a departure from the expected path in which poets are expected to slowly establish themselves in journals. Although some critics believe such success diminishes poetry as a tradition, others have credited these pop culture poets with a renewed focus on classic poetry.

Madisen Kuhn’s Please Don’t Go Before I Get Better, a compendium of mostly prose poems that reveal the challenges of early adulthood, deserves its place next to these bestselling authors. While it shares the clean, minimalist style and lack of capitalization with these Instagram poets (along with a penchant for simple illustrations and pull quotes written in the author’s hand), there’s something even more youthful about Kuhn’s writing that shows a poet coming of age. Kuhn may have over 36,000 followers on Instagram and a first collection Eighteen Years that sold 20,000 copies, but this is the work that shows that she’s arrived in her poetry. Her reason for naming the book exudes just the sort of vitality that defines the collection:

“i used to fear abandonment because i thought that my imperfections made me inferior. that to earn the affection of someone i cared for, i had to beg them, please don’t go before I get better. i believed that someday i would reach this ideal version of myself and suddenly everything would fall into place and i’d ride off into an endless sunset of well-being and stability.”

The titles of the poems also reveal a writer coming to grips with moving across the country, falling out of love, and finding the place we belong. While the collection features many one-word, minimalist titles, those that are more whimsical like “beginnings always seem better through rose-tinted sunnies” reveal the Millennial heart at this collection. Yet it would be wrong to think this indicates shallow writing: the depth of Kuhn’s words shouldn’t come as a surprise simply because she is a younger poet.

Poems like “sufficiency” reveal a writer deeply thinking about place: “i consider every city ive considered before—charlottesville, philadelphia, new york, dc—but they all feel like wrinkled laundry …. they all have their own memories and energies that prohibit them from truly being an emotional island.” Kuhn admits that the dream many of us have to live in a lovely studio apartment in New York City “is most likely a state of mind, rather than something so tangible as a location.” What Kuhn deftly identifies is a fundamental coming of age question that twentysomethings struggle with, that desire to find a new place to be someone different. She alludes to our cultural obsession with great cities without making it the focus, turning our fixation with location into something that alludes us because we try to make the abstract into the concrete.

In another respect, poems like “growing up” are more about finding home than discovering a future self, emphasizing an underlying theme of place as a means of realization. Kuhn often writes in images, explaining that “home is a tiny town and the blue ridge mountains/scenic trips down backroads with my sister …. but home is here, too.” Place is an unexpected cornerstone of this collection, a means of subtly revealing the fear and hope we have when trying to figure out who we are.

Please Don’t Go also features shorter efforts, some of which are a single line, the ideal length for an Instagram, or even Twitter, poem. They are just the sort of poem that would appear on a Tumblr page, innately translating into the digital. “dryer sheets” may not have the same depth as many of the prose poems in this work, but some will enjoy the poem anyway for its simple truth: “i hope you know/that when i tell you goodnight/it’s simply because/i love you/and not because/i need you.”

The coda at the end of the work is a pleasant surprise, a set of loosely connected prose poems that tell a story. “afterword” is an explanatory note following the collection, but it remains in the character of the poet.

Some may come to this collection believing they know exactly what to expect. But it would be a mistake to believe that Madisen Kuhn’s second collection is derivative of mega-selling poets like Kaur. Kuhn has her own voice. Her book may fit right in with the cohort of recent Instagram poets, but what makes this collection stand on its own is the diversity of subject matter. Please Don’t Go Before I Get Better may meditate over first love, but it’s not a collection that entirely dwells on younger moments. Instead, its focus is on looking out at who we can be when we trust the process and look forward with hope. 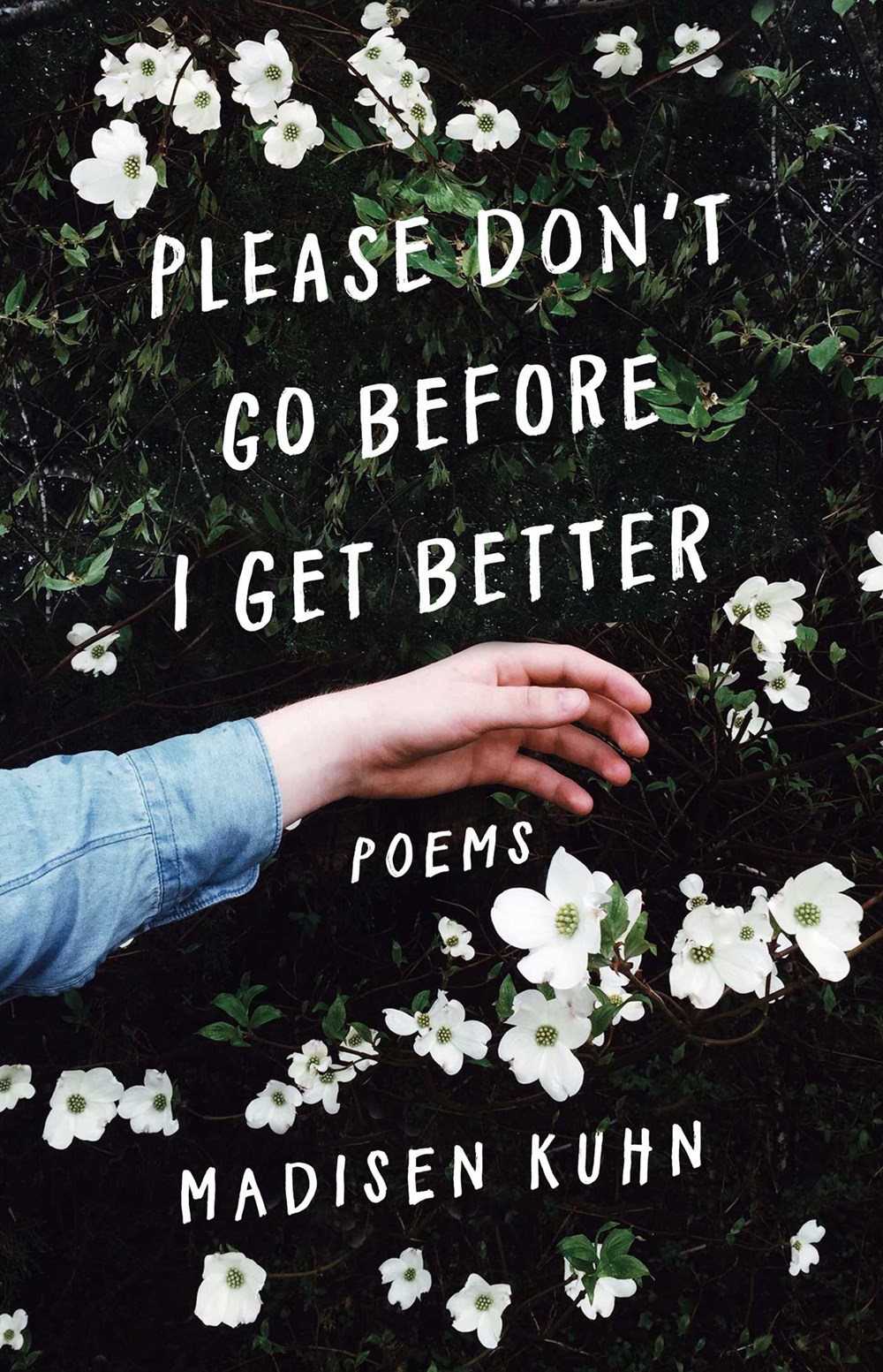 POETRY
Please Don’t Go Before I Get Better by Madisen Kuhn
Gallery Books
Published May 1, 2018

Madisen Kuhn is a writer and photographer living in Charlottesville, Virginia. In 2015, she self-published a poetry collection titled Eighteen Years. She also writes a monthly column for Local Wolves magazine.

Processing…
Success! You're on the list.
Whoops! There was an error and we couldn't process your subscription. Please reload the page and try again.
View Comments (53)