How Do Poets Choose A Collection Opener?

Recently, poet Cathy Park Hong posted a series of tweets deriding the lack of “critical reviews or movement-based manifestos” about writing by people of color. Hong points to the (in)visibility of award-winning writers like Cathy Song and Thylias Moss, but more examples abound. Poet Gregory Pardlo pointed out a similar marginalization after his book Digest won the 2015 Pulitzer Prize. Creating a serious field of study, a map through work by writers of color, is hugely important to those works surviving and being read into the future.

Luckily for readers, Chaun Webster’s new book, GeNtry!fication: or The Scene of the Crime (Noemi Press, 2018), contributes to this work by drawing together and making connections between texts by dozens of writers of color. GeNtry!fication is a book of poetry, but it is also a work of cultural criticism and intersectional race theory that is exhaustively researched and cited.

In particular, the twenty (yes, twenty) pages of Notes and four pages of Bibliography are a colossal moment in poetry and literary scholarship. They contain a list of texts important to the creation of the book as well as further context and inspiration for the poems. The notes also place GeNtry!fication in a lineage, recording the trajectory of Webster’s reading and thinking, and pointing readers to other texts, while insisting on the centrality of the ideas and work of the writers Webster cites. GeNtry!fication is not a traditional academic text, but since the work of creating a critical legacy for writers of color has largely been absent in many academic spaces, Webster has begun that work outside of the Academy.

Webster is part of a growing group of young, mostly black writers whose work is pushing at the boundaries of the page. Danez Smith’s 2015 chapbook Black Movie and their 2017 book Don’t Call Us Dead are prominent examples, but Eve L. Ewing, Tyehimba Jess, Phillip B. Williams, giovanni singleton, Steven Alvarez, and Justin Phillip Reed have all used similar techniques in recent books. Webster gets his typographical experiments most directly from Douglas Kearney, who is mentioned in the Acknowledgements at the beginning of the book and the Bibliography at the end (and provides a cover design).

GeNtry!fication departs from traditional lyric forms of left-justified text. Instead, the words and images strain against the confines of the page: type layers on type, or grows larger or smaller; images take the place of text; and page color inverts. Not a single page looks like any other. It can be difficult to determine where one poem or section ends and another begins. However, that is part of the point: halfway through the book we encounter a white page with a block of black text covering most of it. The text is simply the word “black” written over and over in very small type covering most of the page, so small that it’s difficult to read. But squint and halfway down on the right side of the page you’ll see this phrase: “or perhaps this is just my way of saying i don’t care to be legible.”

However, the visual elements of Webster’s text aren’t the only influences on display. Readers will detect elements of the Black Arts Movement and jazz poetry here too:

Passages like this one are more reminiscent of Kamau Brathwaite or Ted Joans than Kearney. Amiri Baraka is mentioned by name several times: “maybe black is not a home nor a country as Baraka called it nor any essential thing. maybe black is but the imperfect signifier we carry on our way,” Webster writes in the poem “maybe home.” The variety of Webster’s influences and the depth of his reading is astounding.

Also present are traces of books like M. NorbeSe Philip and Theresa Hak Kyung Cha whose book length excavations of a text or archive are also clear influences on GeNtry!fication (Philip’s Zong! and Cha’s Dictee are both cited in the Bibliography). Webster’s project is focused particularly on North Minneapolis, which is one of several meanings of the capital ‘N’ in the title. In one striking page, the words “north minneapolis” appear almost smeared down the page in three columns, landing on the line, “looks like the scene of a robbery circa 1492.” In one of the most illuminating notes, Webster points to Calvin Schmidt who, in 1935, “was federally funded to publish a series of maps.

These were part of a larger study titled Social Saga of Two Cities.” In his maps, Schmidt denotes a section of North Minneapolis as a “Negro slum,” despite the 1930 census finding only 1 percent of the city’s population to be black. This note points to one of Webster’s themes throughout the book: the presence of blackness in the white imagination:

you not supposed to be here

your snarl and ravenous appetite—

Black people, Webster argues, are both invisible and hyper visible, and living in that contradiction, Webster refuses to make himself legible to whiteness.

Mapping Minneapolis’s Northside is a major feature of Webster’s work, both in GeNtry!fication and more broadly. Webster has been engaged in documenting the history and stories of North Minneapolis and its residents; his website, www.echonorthside.com, could easily be viewed as an auxiliary text to GeNtry!fication. In the book, a series of “communiqué” poems—all white text on black pages—find their setting on the streets of Northside:

this child fix it in they mind that they ‘gon race. that. trouble.

‘gon meet up with it on some corner

(we’ll say the corner of Lowry and Penn) good kin in company.

Calvin Schmidt’s white imagination labeled portions of North Minneapolis a “Negro slum” and decades of institutional neglect have left North with fewer resources than most of the city (even in the wake of natural disasters—satellite images still show the scar left by a tornado that ripped through in 2011), but Webster has begun to peel back the layers of historical and ongoing trauma to document the ways the actual Northside departs from the white perception of Northside.

GeNtry!fication, then, is a map. And like a map, there are multiple ways to find a path through the space it illuminates. You can read it straight through, front to back, like a traditional book. Or you can read pieces one at a time alongside the notes to understand the context. Or read the notes, then the poems, then the notes again. Only, read the whole book, notes and all, in any way you like, and then read the texts Webster mentions. Let those texts lead you to others. Let those books be maps, too. Let this book begin an education. 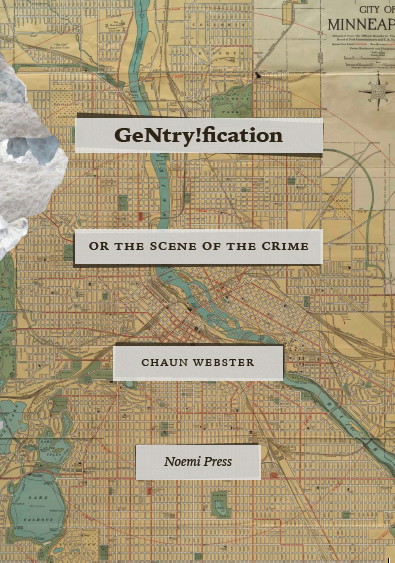 POETRY
GeNtry!fication: or the scene of the crime
By Chaun Webster
Noemi Press
Published April 1, 2018

Chaun Webster is a poet and graphic designer who draws from interests in graffiti, the layering of collage, and the visuality of text. GeNtry!fication is his first book.