Will Humans and Machines Fall in Love?

The Broad’s inaugural show opened in June 2016 with Cindy Sherman: Imitation of Life. It was the first major exhibition of her work in nearly twenty years, and filled the first floor galleries with over 120 works. There would be photographs that spanned the artist’s career, plus two site-specific murals.

At the time, I was working downtown at The Last Bookstore and trying to finish my first novel. It wasn’t going well. I had set out to write a story with a happy ending about a woman named Elsa, an amalgam of a few iconic female characters that have come before her: Joan Didion’s Maria Wyeth, any of Jean Rhys’s heroines, Sylvia Plath’s Esther Greenwood. I think of them each as a woman on the edge: self-destructive, spiraling out, in the midst of an identity crisis.

I had started writing the book while I was mid-identity crisis myself; I had just turned thirty when I left a respectable job at The Getty, had a brush with pills, and ended up in a shady rehab in Culver City. I wanted to believe — had to believe — that even if Elsa was disillusioned, even if she spiraled so far out of control that it affected those she loved, she could still be redeemed. Nothing good comes to Didion’s, Rhys’s or Plath’s heroines. But, I thought, times have changed. A modern woman doesn’t have to be punished for her transgressions, right?

I’d scored mid-week early morning tickets to Imitation of Life through my old coworkers at The Getty. I took the Gold Line into the city. It was a hot day; in fact, it had been a hot month. I was supposed to host an event later at the bookstore, which would be sweltering, even in the evening. The muggy stale air in the store, the disappointment on the author’s face when I’d say we don’t have air conditioning, the trying to maintain a smile while managing both author’s expectations and the store’s rules. And then there’d be seeing my disgruntled co-workers, angry because like me they would rather be working on their writing or film or musical projects than dealing with the downtown grime. I wasn’t looking forward to it.

At the museum, a long line had formed at the entrance. The people seemed to be tourists mostly, with sunburned shoulders and floppy hats. They snapped pictures of the The Broad’s honeycomb exterior. A few young people dressed in all black looked bored; there was a pair of middle-aged couples with severe cropped haircuts and bulky jewelry. At eleven o’clock, we filed in.

The show began with images from Sherman’s famous Untitled Film Stills (1977-80), which I must have seen somewhere before but had never really appreciated. The text beside the photographs read: self-portrait. Various familiar-seeming women stared back at me, wearing clothing from 1940s and 50s fashions, posed like stock characters in a film: the seductress with a martini glass, the B-movie librarian, the innocent runaway. Everything about the images — the women’s poses, wigs, and makeup — was deliberate. Here is a woman controlling her own narrative, I thought. A woman inviting scrutiny, someone to take in her disheveled hair, the little negligee, the subtle reveal of leg, those large black glasses—and translate her into ‘vixen’ or ‘floozy’. I couldn’t help but think of my protagonist Elsa, who flagrantly manipulates the male gaze, exploiting her own objectification to her advantage.

These were followed by two color photographs, Rear Screen Projections (1980-81), and Centerfolds (1981), in which Sherman is depicted as a young woman or teenage girl, sometimes disheveled, her makeup smudged, looking forlorn, damaged. Within the close-cropped frames, vivid colors, and vulnerable shot angles, I began to feel a familiar anxiety creeping in. I shivered in my tank top, suddenly aware of the cold museum air.

I was overwhelmed and I couldn’t understand why. What was I witnessing? Why would a woman in control of her narrative depict herself so monstrously?

I returned to the beginning. To those first black and white images reminiscent of the 1940s. I thought of Jean Rhys, whose debut novel Good Morning Midnight was published in 1939. “Oh, Lord is that what I look like?” The heroine Sasha thinks when a young gigolo approaches her. “Do I really look like a wealthy dame trotting round Montparnasse in the hope of—?” Sasha had recently arrived in Paris after the death of her newborn in London. She’s alone, drinking too much, and abusing her sleeping pills, but even so she attempts to appear all right. She isn’t trying to draw attention, but she’s worked as a model in the past, and knows when a man is interested in her—she knows that every look is an evaluation, a judgment as to who she is.

Not so close, the museum guard tells me. I step back from the black and white photograph of Sherman reaching for a book, eyes cast upward, to the side, almost coyly. She’s wearing a starched white shirt. See? The viewer projects nostalgia and desire on the object, and making a judgment, the viewer leaves the object powerless. That’s what Rhys’ Sasha is up against because the object is almost always a woman. Faced with little agency in the early twentieth century, Sasha is more a victim than feminist hero.

Here she is in her boss’s office:

By anticipating and provoking the viewer, Sherman subsumes the power. Isn’t this why I wrote Catalina in the first place? Why Elsa is the way she is? I wanted to be in control of my own womanhood. To define it not how others perceive it, but by my truth. I wanted a richly drawn, emotionally complex woman—who could mess up and maybe still find happiness. At least liberation.

I’ve made my way back to Cindy Sherman’s Rear Screen Projections. The text beside it says she took cues from the 1960s television role models. In the photographs Sherman sometimes appears assertive, in others submissive. Is she a June Cleaver, or a Mary Richards?

It brings to mind Esther Greenwood, Sylvia Plath’s heroine of The Bell Jar, who could be Sasha’s mid-century counterpart.  “I decided I would watch [Doreen] and listen to what she said, but deep down I would have nothing at all to do with her. Deep down, I would be loyal to Betsy and her innocent friends. It was Betsy I resembled at heart.” The classic Madonna or whore question. Is Esther her promiscuous friend Doreen, or Betsy, who’s nicknamed Pollyanna Cowgirl? Ha. If only it were that simple—as Esther finds out over the course of the novel.

Then here again, Sherman’s photographs take a turn. My sneakers squeak on the sleek polished floor. Centerfolds, Pink Robes, Sex Pictures. The artificial stage lighting, the wigs, the exposed skin. The smeared makeup. It’s unmistakable, there is a distinct feeling of sexual unease.

I think of Maria Wyeth, Didion’s heroine in Play It As It Lays published in 1970, who, even depressed monitors her salt intake because she knows her body is a type of currency. By Maria’s era—post sexual liberation, post feminism movement—the anxiety of having or not having a sexual partner is replaced with a deep sense of nihilism. Didion writes, “It had seemed this past month as if they were all one, that her life had been a single sexual encounter, one dreamed fuck, no beginnings or endings, no point beyond itself.” There is a whiff of impassivity in this statement, but also profound exhaustion. “I am just very very very tired of listening to you all,” Maria tells her current lover.

I revisit Sherman’s later work one more time before leaving the museum: older women who pose as if for a formal portrait. Their mouths enlarged, grotesque, the make-up around their eyes thick, nails long and painted garish colors, foreheads stretched back. Looking at them it occurs to me suddenly that it doesn’t matter what Sherman wears, or how she paints her face—we don’t know the real Cindy Sherman. And that’s the point. Beautiful or hideous, women are judged by the exterior. Nothing has changed then. Sorry Jean Rhys, sorry Sylvia Plath and Joan Didion.

Women still perform the balancing act; negotiating and compromising our wants and needs with how the world translates the word ‘woman’—and then dealing with the fall out. Elsa can’t have a happy ending because she broke the rules. She showed a crack in the veneer, she blinked and revealed her rage. She ruined the illusion for the viewer. “Womanhood is a shitty exchange rate,” Elsa tells us. I hadn’t been paying attention, guilty of applying my own expectations. She’s known all along how things would turnout, I only had to listen.

I exit the museum, stepping out into the newly landscaped courtyard. Olive trees bend in the warm breeze. A vendor offers fresh cut mango and cold aguas frescas. The museum restaurant is still under construction, it will be a large post and beam style building overlooking Hope Street below. I can hear the worker’s tools, echoing off the surrounding buildings. The ex-Getty coworker who got me The Broad ticket texts me: What did you think of the show?

Illuminating, I write back, and head for the train home. 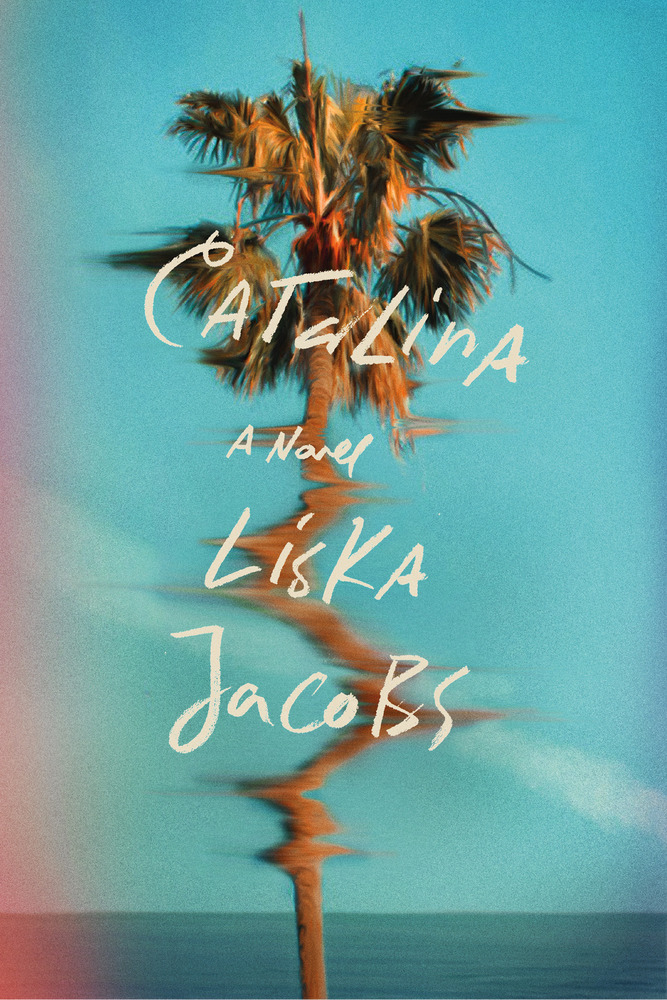 Liska Jacobs’s debut novel Catalina is out now from MCD x FSG. The Chicago Review of Books named it one of the best new books of November 2017.

Liska Jacobs is the author of the novel CATALINA, and holds an MFA from the University of California, Riverside. Her essays and short fiction have appeared in The Rumpus, the Los Angeles Review of Books, Literary Hub, The Millions, and The Hairpin, among other publications.