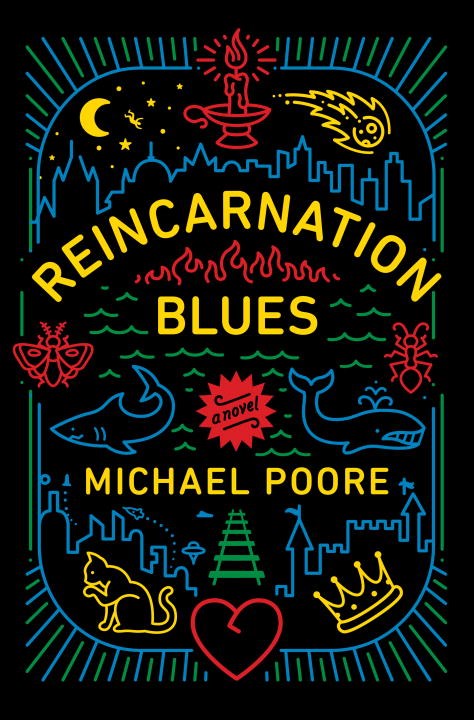 Many lives, many deaths, the future, the past—and a substantial degree of wit—all come together in Michael Poore’s debut novel Reincarnation Blues. In Poore’s version of the universe, every soul has 10,000 lives to reach perfection. Some souls only need a few lives, or even a few hundred, but Milo — the oldest soul in the world—only has five lives left.

One of the main reasons for his failure? He’s in love with Death, otherwise known as Suzie, who is more interested in opening up a candle shop than helping Milo avoid the abyss of Nothingness.

This book made me laugh out loud. And then a page later, it made me sob. Reminiscent of Tom Robbins and Christopher Moore, Poore finds humor in in the dark absurdities of life. The story flips between Milo’s lives: from the early era of civilization when Milo and his family were hunters and gatherers; to the present, when he is a fisherman who dispenses advice as he takes them out to sea; and on to the future when he lives many improbably strange lives. In one of these many future lives, for example, Milo creates the most important technological invention in history—a floating fish that does everything for the person it follows. We also follow his many ventures between lives with his Death, Suzie.

Poore brilliantly blends humor with horror, leading to laughter while Milo gets eaten by a shark (not a spoiler; this happens on the first page), finds himself dropped on a garbage island to die, and volunteers to have himself thrown across a large ravine. Everything line is so dry and matter of fact that the humor seems surprising every single time. Just ask my roommates—I read portions of the book aloud to them because I needed to share how funny it was.

That said, Poore also does a great job of dealing with what it means to be human.  Life is not easy, and he tackles this weighty subject in interesting ways. Take Suzie, for example—tired of being Death, she wants nothing more than to own her own candle shop. Even though much of the book is not set in worlds or times that we are familiar with, all of the situations Poore creates are incredibly relatable. Questions of individual good versus greater good—as well as, appropriately for our era, the individual versus the greater government—weave throughout the book and Milo’s many lives.

Be prepared to set aside a chunk of time when you read Reincarnation Blues because you won’t want to put it down until you know whether or not Milo reaches perfection. This is a darkly funny, absurd book that is so much deeper than it seems at first glance. I look forward to seeing what Michael Poore has in store for us in the future.

Michael Poore‘s short fiction has appeared in Glimmer Train, Southern Review, Agni, Fiction, and Asimov’s. He is the author of one other novel, Up Jumps the Devil.

‘The Afterlives’ Is a Hilarious Novel About … Death