Portrait of the Artist as a Young Feminist: Gabrielle Civil 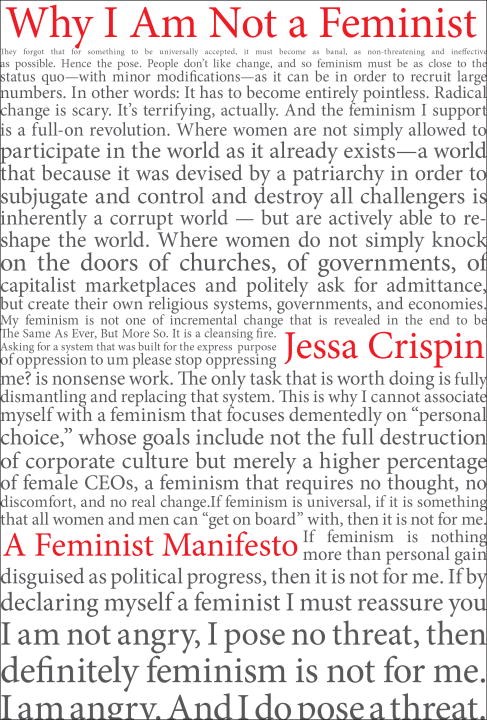 Jessa Crispin—for years one of the publishing industry’s go-to reviewers of new feminist releases—has decided to reject feminism. But not for the reasons you might expect. She believes contemporary feminism isn’t radical enough. “[The] median feminist is generally going to be a middle class, educated white woman,” she writes in Why I Am Not a Feminist: A Feminist Manifesto, which hit shelves yesterday. And this woman, she argues, has become the paragon of the feminist movement—a striver, consumer, sex-positive power house seeking her own independence.

The problem with this? Everything, according to Crispin. “The work place and capitalistic society has become increasingly hostile,” she writes. For both men and women of all races and economic backgrounds. The feminism that survived capitalism, she writes, is “universal feminism,” a watered-down apologetic version of a movement that once sought to create new social structures, not merely break down existing ones. And this lesser version “has been marred by…patriarchal values,” she writes. It rewards individual pursuits and upholds racist, homophobic ideals instead of creating a world where everyone, truly, is equal.

Because of these reasons and others that she lays out in her book, she no longer identifies as a feminist. In this interview, I ask her to expand on the alternatives she sees to “universal feminism,” her thoughts on the Women’s March, and how Trump’s presidency has affected her thinking.

Amy Brady: What inspired this book?

Jessa Crispin: About three years ago I fell into this niche where, if there was a new book by a feminist, I’d be given it to review. Which means I ended up reading a lot of contemporary feminist literature, and I just felt incredibly dissatisfied with it. Apparently that frustration hit some sort of critical mass, because I got to the point where I couldn’t take it anymore.

Amy Brady: Your book is titled Why I Am Not a Feminist. Is there a label that you do use?

What I find most useful about feminism is that it was useful to me in my early twenties in that it helped me to figure out what I believe in, which is that no human being holds more or less value than anyone else. Everyone’s life is important and sacred. And no longer when you say feminist is that necessarily what someone believes. It’s become meaningless in all the problematic ways it’s been used. When I say that world, you can now attach any meaning to it that you want  – that I’m a capitalist striver, or that I’m suffering from sort of abuse – so it doesn’t mean anything anymore, and I’m not going to use it. The way that feminism is used now isn’t going to get me where I want to go – it’s not useful to my philosophy. There are too many things that have been done under the name feminist that have nothing to do with me. When I first came up with the title, I thought that it could be seen as a kind of stunt. But as I finished writing the book I realized that the word truly isn’t useful to me anymore and that I don’t identify with it.

Some of the feedback I’ve gotten so far, especially regarding the title, is that I’m being too provocative, that I’m just trying to push people’s buttons. But this project is entirely sincere. There’s nothing more heartfelt for me than this book.

Amy Brady: You were writing it prior to the election. Has Trump’s win made you rethink any of its contents?

Jessa Crispin: No, it just seems even more critically important to say these things. With the Women’s March, for example, we witnessed a lot of angry, activated people marching without a coherent message. There was no philosophy, just a big shapeless mess. You can only be against something for so long—at some point you need to be for something. And figuring out what we’re for seems even more critical than it did a few months ago.

Amy Brady: Speaking of the March, it’s statistically likely that a lot of women who fall under your category of ‘universal feminism’ showed up at the Women’s March in January. Do you feel that their participation somehow diminished the March’s impact?

Jessa Crispin: Anytime a group of people take to the street and say ‘fuck you’ in unison, that’s a powerful act. I have total respect for the women who marched. There were even three marches in my home state of Kansas. I love that it pissed off Trump. It let him see just how unpopular he was. But from here we need to channel this energy into something even more constructive, and I don’t think that universal feminism will do that. That kind of feminism is more about what can I get for me, personally, in this absolute shit that we live in. We need to think bigger.

Amy Brady: Much of this book is dedicated to a discussion of the need to dismantle larger systems like capitalism, consumerism, and patriarchy. That’s an enormous job. Where do we start?

Jessa Crispin: You start first with yourself and then move outward from that. Trump is not just a person; He is the apex of a culture that we have allowed to exist and have participated in. So, he’s not the problem, and his administration isn’t the problem—the culture is the problem. There’s no excuse anymore for participating in that kind of culture. And I know it’s not easy. It’s not like we can say ‘oh let’s start shopping at Whole Foods, because that’s going to save the planet.’ No, a different kind of consumerism doesn’t lead to better consumerism. It’s time to take our brains and do something else with them—be creative instead of destructive.

Amy Brady: Can we consider incremental change a kind of progress?

Jessa Crispin: It depends on what you mean by progress. Are you counting as progress the fact that the wage gap is closing or that there are a greater number of women on the Supreme Court than ever before? Those things are nice, but when you look at the total system, you see a crazed rush to the right. And I think for us to focus on these smaller victories is a waste of energy when the rest of the world is going to shit. It makes sense, though: We tend to focus on things that we can control, because not seeing results feels like soul death. But I argue in my manifesto that our actions shouldn’t be about setting personal goals and meeting them; instead, we should be living lives according to our values and spreading the message of those values. Doing so helps to imbue within us a kind of faith that helps us to survive larger cultural setbacks.

Amy Brady: Throughout the book you say that “Men aren’t our problem.” Would you expand?

Jessa Crispin: Men are not our fucking problem, that’s my expansion. At this point, I don’t know why we’re bothering [with them]. We’re still in a world where men as a whole have not adopted feminism. They have not done the work. We would have noticed if they had. So I don’t know why we bother. We tried using a different tone, using different language to describe it, and none of that worked. We’ve told them our views, they didn’t listen, and now it’s no longer our job to get them to listen.

Amy Brady: At the end of your book you write, “The way we order our lives, our homes, our work, our souls—our worldviews must be reimagined in wholly new ways.” What are these new ways?

Jessa Crispin: Baby, if I only had the answer to that shit! For hundreds of years people have been trying to figure this out. There used to be utopian thinkers, usually working in convents or monasteries, whose lives were built around communal work and prayer. But by the beginning of the twentieth century, people largely stopped thinking like this because it was associated with the Soviets. But we need to get back to imagining different ways or organizing our societies. There used to be experimental cities, especially here in America, and organizations like Walden Two. But we don’t do that kind of experimentation anymore because we’ve decided that capitalism is too hard to think around. That said, I don’t think there’s any one perfect idea. There are a hundred different human temperaments and desires to account for. We just need to start experimenting again.

NONFICTION
Why I Am Not a Feminist: A Feminist Manifesto by Jessa Crispin
Melville House
Published February 21, 2017

Jessa Crispin is the founder and editor of the magazines Bookslut.com and Spoliamag.com. Her previous books include The Dead Ladies Project and The Creative Tarot.