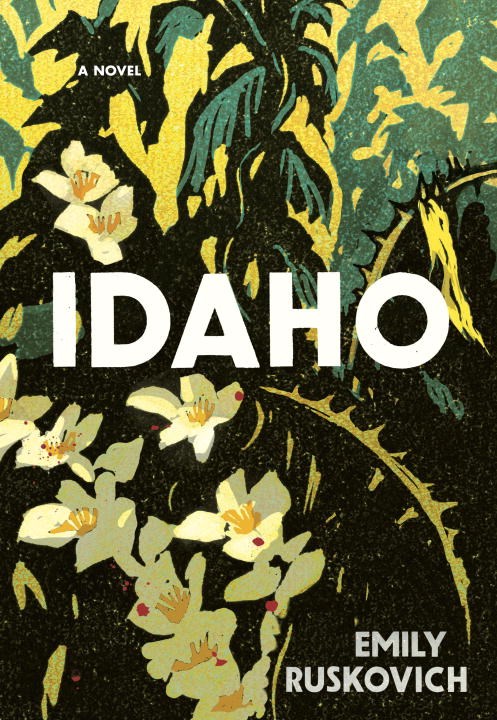 A heartwrenching tale from O.Henry Award-winning author, Emily Ruskovich, Idaho explores the reverberations from a senseless moment of violence that results in the obliteration of a family.

Jenny and Wade live with their two little girls, May and June, in the mountains of Idaho. They have a happy—albeit solitary—family life before it is disrupted by an irrevocable impulsive act. When the family drive out to the next mountain to collect firewood in oppressive heat one day, Jenny inexplicably kills May with a hatchet. In the panic that follows, the parents lose track of June and eventually discover that she has disappeared.

The details of the murder are filled in with the help of multiple narrators, including Wade and Jenny, but the principal voice of the story is Ann, Wade’s second wife. She is akin to readers—intrigued by the murder and obsessed with making sense of the awful tragedy. The multivoice narration provides a comprehensive collage of the tragic event.

This is not a straightforward murder mystery. Yes, the murder forms the nexus of the story and connects the characters, but the writer is more concerned with its impact on the lives of people directly involved with the murder and implicated in it because of their associations.

The non-chronologically stratified chapters add a three dimensional depth to the narrative as we trail Wade, Jen, and Ann and trace their life trajectories. Emily has a gift for poetic writing; each sentence is stylized to perfection. She strips down every emotion to its bare elemental form and has the knack for succinctly describing every emotion. Her ability to describe even the most quotidian setting with nuance reminiscent of Tessa Hadley, who has a similar talent for bringing parochial episodes alive with her eloquent prose.

Idaho is exceptional partially because of Ruskovich’s decision not to focus on the dramatic moments, such as the murder or June’s disappearance—something which a less gifted writer might have done to keep readers’ interest intact. She chooses to focus instead on the prosaic, slice-of-life moments and the impacts of loss in even the most minuscule of actions. What makes Idaho particularly memorable is how Ruskovich verbalizes the myriad ways love and sorrow are manifested in our actions while also speaking to the intersection of empathy and forgiveness.

Ann is a perfect narrator. We follow her life over the decades, learning through her vantage point about Wade’s hereditary dementia and how it slowly chips away at his personality. Ruskovich sensitively explores how Wade’s illness is both a blessing and a curse to him. On one hand, it severely impedes his activities and makes him both a liability and a threat to himself and his wife. However, his faltering memory also allows him to forget the excruciating knowledge of his family’s history. Wade is, especially in his later years, like a man groping in the dark. He carries an inexplicable hollowness to which he is unable to give context because of his receding memory. Sometimes this results in him lashing out at or holding grudges against Ann, since he assumes that vacuum to be her doing. Ann notes that:

“It’s the texture of his memories, not the feeling, that is gone. A slow melding, blurring of lines, premise without impression. But still there is a center, there is a date and time around which all indistinctions constellate.”

Ann, on the other hand, does not have the luxury of such intact forgetfulness. She has to bear the larger burden of Wade’s loss as she oscillates between dutifully reminding him of his daughters’ loss and feeling guilty for evoking such wretched memories for him.

While Wade is hampered by his illness, Jen is similarly held back by her guilt in her quest to find her daughter June. Her years in jail are elaborately described, and her self-imposed exile and subsequent friendship with cellmate Elizabeth are expansively laid out. As much as I understood Jen’s fatalistic approach, I still couldn’t wrap my head around why her maternal instincts didn’t come across so well. She does not show even a sliver of curiosity about her missing daughter’s fate. Her clean disengagement from her family seemed a bit unrealistic to me, even if it is born out of her guilt.

Ann goes to great lengths to ensure that she has left no stone unturned to find June. Having lived so many years under the shadow of a loss, she seem to have introjected it. She avoids contact with children, just like her husband, and lives her life under a black cloud of grief. She rehashes different permutations of the events of what transpired on that fateful day in her mind. She doesn’t have the heart to ask Wade exactly what happened, as he only talked about it once. It’s clear, however, that it is not truly the What but the Why that baffles Ann and urges her to examine that fateful day again and again.

As aesthetically pleasing as this book is, I had a few minor niggles. I am all for complex, realistic endings and there is nothing I like more than open ended conclusions. However, I still take issue with how Jen’s psyche was not explored more. As hypnotic as Ruskovich’s storytelling skills are, I do think that some portions of the book are overwritten. There are large swathes of novel which detail Jen’s years in prison—her memories and thoughts—yet very little emphasis is given on what went on in her head on the day she murdered her daughter. Ruskovich spends quite a lot of time elucidating Jen’s inner thoughts, so it feels like a bit of a cop out when she shirks from answering the most important question on the reader’s mind.

Regardless of these quibbles, Idaho is an absorbing story of memory, redemption, and loss and it is definitely one of the most self-assured debut of recent years.

Emily Ruskovich grew up in the mountains of northern Idaho. She was the 2011-12 James C. McCreight Fiction Fellow at the University of Wisconsin-Madison. Her fiction has appeared in Zoetrope, One Story, and the Virginia Quarterly Review, and she was a 2015 winner of the O.Henry Award for her story “Owl.”

Trying to be Good in “Liberation Day”