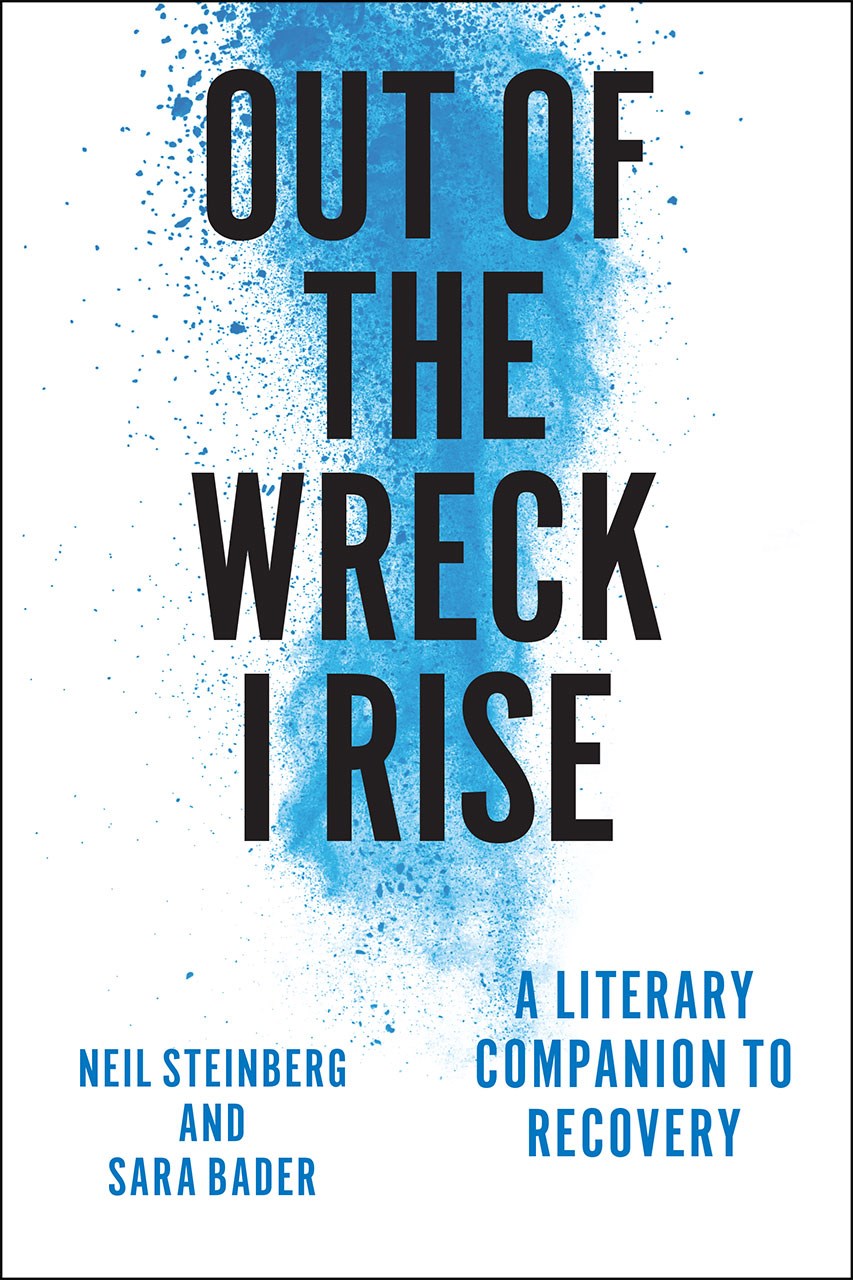 “In the fight against addiction, use whatever works,” Neil Steinberg and Sara Bader write in the introduction to Out of the Wreck I Rise: A Literary Companion to Recovery. For many in recovery, what works is a higher power, or a sense of community, or new hobbies and activities. For Steinberg, Bader, and their literary, intellectual, and philosophical audience, what works is delving into the history of the written word.

The genre of Out of the Wreck is difficult to pin down: part literary criticism, part recovery literature, and part ethnography. The book organizes literary history into nine chapters, each describing in a rough chronological order experiences that apply directly to addiction, such as denial or relapse. Every chapter has a critical reflection on the topic, followed by carefully curated quotations that add humor, wisdom, and, sometimes, commiseration.

These quotes are presented as an alternative to AA’s familiar mottos—”One Day at a Time, Easy Does It, Fake It until You Make It.” Instead, Steinberg and Bader present “True sentiments expressed in plain language,” which can “act as a talisman” to aid those seeking long-term sobriety. In addition to the quotes compiled in the book, Steinberg and Bader also include an extensive bibliography, allowing those who find their book helpful to put their new favorite quotes in context.

The loose, impressionistic, bibliophilic explorations of Out of the Wreck make it an appealing read for many audiences. It is a book for addicts in recovery who seek wisdom beyond 12-step, conference-approved literature, for those who do not yet think of themselves as addicts or have not yet started recovery, and for non-addicts who want to learn more about the mystified, discreet workings of recovery communities: a world where “specifics are often hard to come by.” The book is too personal to be thought of as academic work, too analytical to be thought of as recovery literature, and too compassionate to be read as didactic or proselytizing.

In addition to the great service of discovering and organizing quotes throughout literary history, Steinberg and Bader frame and analyze the literature. In a look at James Thurber’s “One Is a Wanderer,” the authors present a quote depicting a man’s internal confrontation with his addiction. In a following analysis, they point to the ways in which the quote articulates “the famous denial that lies in the heart of addiction.” Steinberg and Bader pull specific words, sentiments, and ideas from quotes in a way that helps structure the narrative of addiction they are telling throughout the book. Such robust literary criticism is usually reserved for academic discourse, which is seldom associated with the inspiration and self-care that Out of the Wreck is invested in.

In the same way that the book defies expectations of literary criticism, it complicates the conventions of recovery. It spotlights far-from-anonymous figures such as Friedrich Nietzsche, F. Scott Fitzgerald, and Vincent van Gogh, who, either through their fame or through the content of their ideas, complicate the messages of the AA canon. The entire first chapter is dedicated to reflections on the beauty and pleasures of drinking and drugs. Anaïs Nin boldly describes:

A martini makes an ordinary glass shine like a diamond at a coronation, makes an iron bed in Mexico seem like the feather bed of a sultan, a hotel room like the terminus and climax of all voyages, the pinnacle of contentment, the place of repose in an altitude hungered for by all the restless ones.

The quotes the book presents are not triumphant or self-righteous; they capture moments of heroic struggle against denial and delusion, even if that struggle has not yet begun.

Despite these figures’ often demigod-like reputations, Steinberg and Bader insist, “Whatever accomplishments and distinctions you fancy make you extraordinary mean nothing in AA.” So, on the one hand, the book empowers AA by adding the extraordinary messages of famous thinkers and authors; yet on the other hand, it shows that these great literary figures are less than extraordinary, more part of the fabric of the universe as described by recovery literature and communities. While Stephen King’s work may be prolific and Aristotle’s ideas profound, their messages are ultimately moments that fit into the heroic story of the addict.

Perhaps most interestingly, the book uses second-person voice to speak directly to its audience: a practice which in meetings might be referred to as “cross-talk.” Where AA literature and the “share” structure of meetings depend upon a first-person “I” or “we,” Out of the Wreck opts for “you,” instigating its audience to relate, to get involved, and to hold themselves accountable.

The book’s second-person voice also differentiates it from the cold, disinterested third-person of academic or medical discourses. These distinctions suggest that, while the spiritual exploration of AA and the critical distance of rigorous scholarship are both necessary, so are the gradations. One of the great strengths of Out of the Wreck is its ability to capture the subtle and challenging gray areas in which, as imperfect human beings, we most often find ourselves.

NONFICTION
Out of the Wreck I Rise: A Literary Companion to Recovery
By Neil Steinberg and Sara Bader
University of Chicago Press
Published August 23, 2016

Neil Steinberg is a columnist at the Chicago Sun-Times and has written for a wide variety of publications, including Esquire, Rolling Stone, Sports Illustrated and Forbes. He is the author of eight books, including Drunkard and You Were Never in Chicago, the latter published by the University of Chicago Press.

Sara Bader is a book editor, researcher, and quote collector. She created and maintains Quotenik, an online resource of verified quotations. She is the author of Strange Red Cow and researcher for the best-selling The Atheist’s Bible.