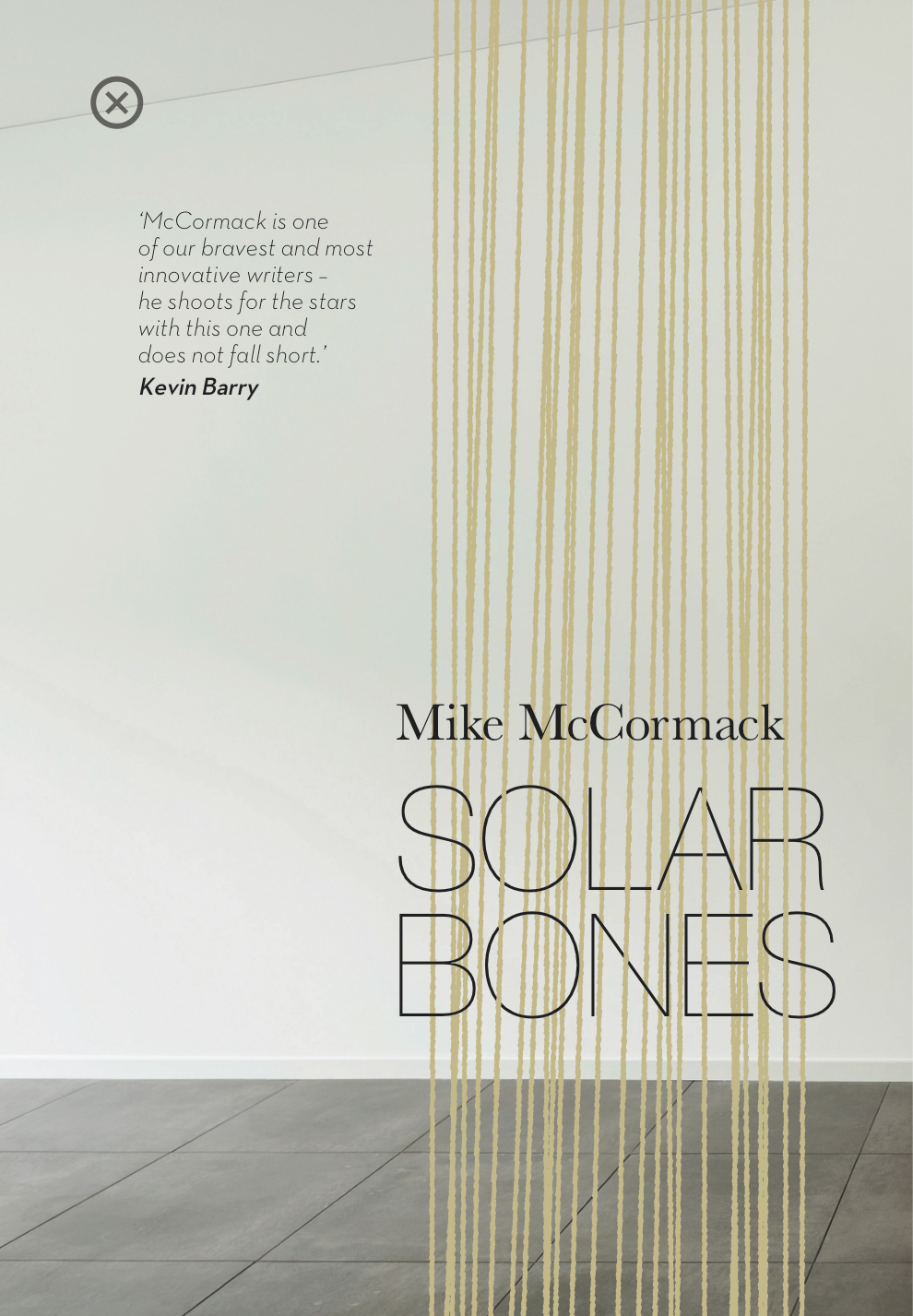 “In the life of a man, the house thrusts aside contingencies,” writes Gaston Bachelard in The Poetics of Space, first published in 1958. “Its councils of continuity are unceasing. Without it, man would be a dispersed being.” The observation seems more relevant today than ever, when new understanding of science and society render it increasingly difficult to defend notions of a consistent existence. Our universe is expanding. Solid objects are mostly empty space. By the time you reach the end of this sentence, around 50 million of your cells will have died and been replaced by others. Even our guiding laws, ideologies, currencies, and borders are unpredictable, each ultimately human constructs. In this context, how are we to locate ourselves? How do we accept the instability of the world and the precariousness of our place within it?

Such are the central considerations of Mike McCormack’s wholly original, incantatory third novel Solar Bones, which eschews traditional structure in order to confront the ideological scaffolding, however rickety and fragile, we erect as a means of organizing life and attaining a sense of belonging.

Written in a single, unceasing sentence formatted only by line breaks, Solar Bones moves in concentric circles through the stream-of-conscious recollections of a man named Marcus Conway, a middle-aged engineer from the west of Ireland briefly returned from the dead on All Soul’s Day, November 2008. Roused by the tolling of the Angelus bell, “a summons struck on the lip of the void,” Conway waits in his kitchen for his wife and two children to come home, filled with “a crying sense of loneliness for my family.”

Scenes from their shared past proceed to visit him, some touching and comical, others seeming to haunt the ghost himself: his daughter Agnes’s provocative artwork featuring excerpts from court reports written in her own blood; his son Darragh’s emigration to Australia; his wife Mairead’s illness caused by water contamination that hospitalizes hundreds in County Mayo; pressures from his job as a civil engineer, tangentially related to the construction boom and resulting economic collapse unfolding in Ireland at the time of the novel.

The structural innovation of Solar Bones places it in conversation with Irish experimentalists ranging from Joyce and Beckett to McBride; yet the novel’s dense layers, preoccupation with contingency, and ability to successfully launch soaring philosophical ponderings from the quotidian also align it with the likes of Jenny Erpenbeck’s The End of Days, Per Petterson’s Out Stealing Horses, and even Richard McGuire’s acclaimed graphic novel Here, which catalogs events that transpire in one corner of a single room across millennia.

While Solar Bones consists largely of reverie—its protagonist remains essentially unmoving—McCormack’s perceptive gaze, artful elucidations, and confident prose elevate the conceit to a captivating experience. By keeping Conway immobile, McCormack allows intimate thought to expand toward infinitude, the unbroken torrent of one man’s archived memories, humorous meditations, and uninhibited fears accurately portraying “how the mind unravels in nonsense and rubbish / if given its head… mental echoes which reverb with our anxiety to stay wake and wise to the world.” Marcus Conway does not rest easily in death. Cast from life, he is an engineer “with no accuracy anymore / all my angles tilted to infinity / finally unbound from myself into a vast oblivion…in which there are no markings or contours to steer by nor any songs to sing me home.”

The search for underlying order amid such chaos is brilliantly echoed in McCormack’s prose. Lacking full-stops, Solar Bones is propulsive in a way that provides a near breathless reading experience, lending the sense that setting the book aside might unravel the intricate connections being formed within its pages. Some of the leaps through time can be difficult to track, and Conway’s musings occasionally veer toward the absurd, but such factors only underscore the novel’s main point: what emerges is a reverence for life, the confusion of the human condition beautifully juxtaposed beside the remarkable improbability of our existence—what Bachelard called the “dual universe of the Cosmos and depths of the human spirit.”

Far from inviting frustration, the unexpected structure of Solar Bones is not only readable but unnervingly close to reality, rejecting the imposition of a smooth narrative line to evoke the tumult and recombinant quality of lived experience. Fittingly for a book absorbed with structural underpinnings, Solar Bones feels irreducible: any quote pulled from the text is ultimately corrupted by its extraction. Much like a three-dimensional shape emerging from a magic eye image, each of Conway’s memories is essential, gathering across the novel to coalesce into a profound portrait of life. The result is an effective replica of how the seemingly meaningless bustle of the present and dense layers of the past add up to become us, our identities.

Such cohesiveness is what Conway desperately seeks, whether it is pips on the radio announcing news bulletins at regular intervals, or watching cars pass through the neighborhood and knowing the driver and destination of each—all “those human rhythms that bind us together and draw the world into a community, those daily / rites, rhythms and rituals / upholding the world like solar bones.” Yet as only an engineer can truly appreciate, the most stable structures and patterns are those flexible enough to withstand significant change.

In this respect, Conway’s family alone acts as his anchor. Tellingly, Conway’s recollections include instances when his family members cross thresholds to briefly become strangers, such as Agnes “coming into her own, my daughter taking a decisive step towards herself, a curious feeling which had me in two minds, as if I were welcoming and saying goodbye to her in the same moment,” or Mairead’s illness, though which “we were now carried towards each other on the tidal rhythms of her fever, rising and falling on those swells specific to the illness itself, every moment pushing our marriage beyond its usual, mannered intimacies and into a new knowing of each other.” In a later memory, Mairead holds up a knife gifted at their wedding, its scuffed blade and bleached handle demonstrating decades of use, and says, “I love that we’re living the kind of life where things are wearing down around us.” Defying the more common depictions of fractured domestic life found in novels, Solar Bones offers the poignant story of a family that has remained steadfast in their loyalty toward one another despite surrounding chaos and hardship.

“Piles and Piles of Stuff”: An Interview with Sue Mell about Provenance 

Through betrayal and dislocation, doubt and illness, stains and shame and imperfection—even, it seems, through death—Conway’s family is the cotter pin capable of holding fast what would otherwise be an unnavigable life, “a rickety thing of chance components bolted together in the dark, the whole construct humming closer to collapse than I had ever suspected.” The people Conway loves, or perhaps love itself, is the “harmonic order” he seeks, a point of belonging to return to when life’s illusion of continuity loosens.

In such a way Solar Bones is a stunning outcry against human isolation and the “cosmic odds stacked against this here-and-now.” It is a heartfelt hymn to the matchless shelter of love, singular in its stability, relentlessly singing us home.

Lara Palmqvist has received grants and awards from the Association of Writers & Writing Programs (AWP), Anderson Center at Tower View, Marble House Residency Program, and the Sozopol Fiction Seminars in Bulgaria. Her writing has appeared or is forthcoming in Ploughshares online, The Rumpus, Blue Earth Review, and South Dakota Review, among other publications. A native of New Mexico, she currently lives and writes in Northfield, Minnesota.