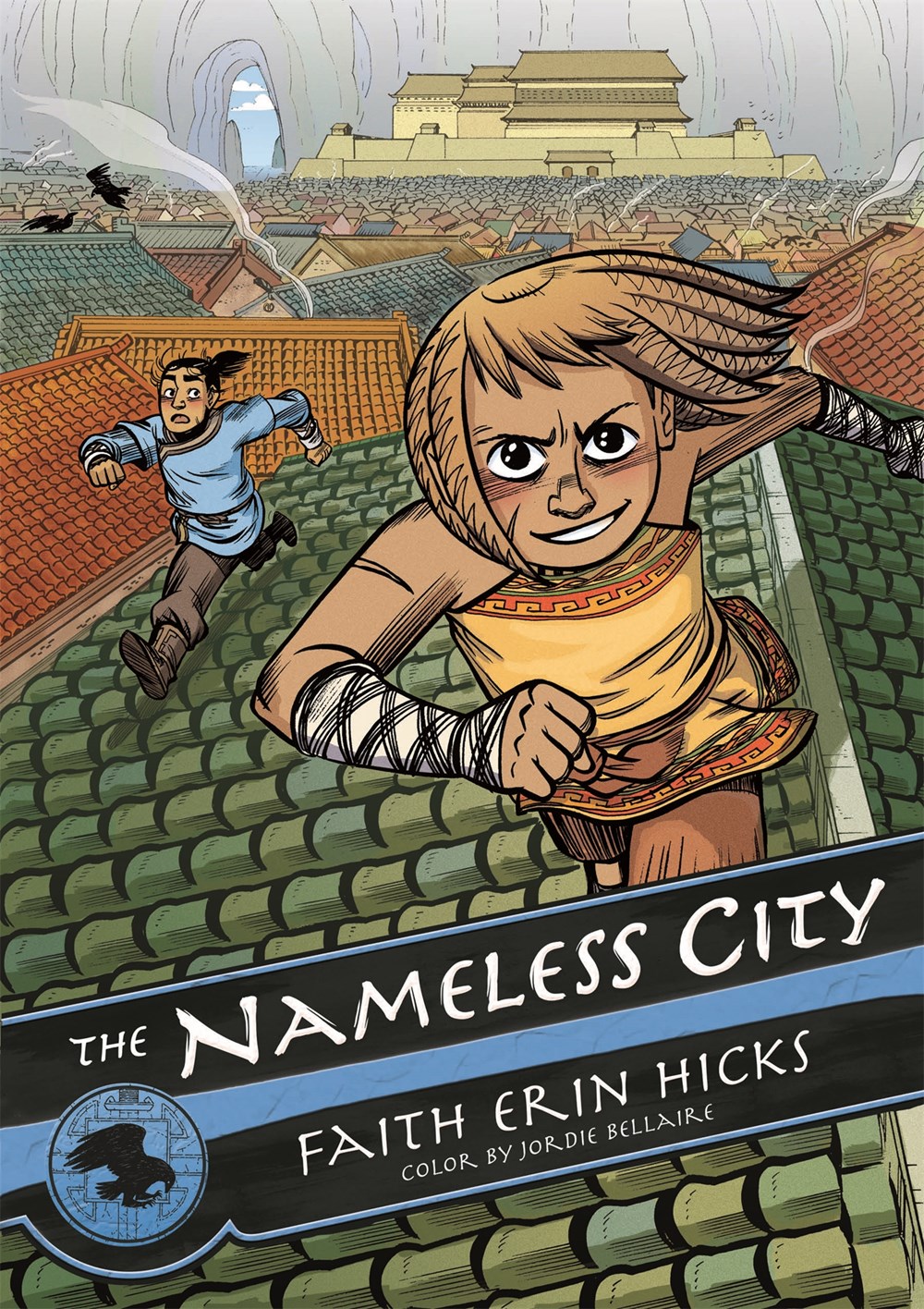 Graphic novelist Faith Erin Hicks has drawn thousands of school lockers and backpacks during her career, from her first web comic Demonology 101 (about a 16-year-old demon being raised in modern society) to the Eisner Award-winning Friends with Boys (about a home-schooler making the jump to public high school … with ghosts).

So when Hicks set out to write her next graphic novel, she wanted to do something completely different. She began researching the history of China, which led to her new novel, The Nameless City, about two teenagers on different sides of a racial divide in a city under constant threat of invasion. Despite the new setting, the story still includes the hallmarks of Hicks’s earlier work: friendship, family, identity, relationships, and the supernatural.

I sat down with Faith Erin Hicks to talk about the Silk Road, switching careers, and creative collaboration.

Jesse Doogan: Most of your comics have been set in contemporary high schools, but The Nameless City takes place in historic China. Why the change in setting?

Faith Erin Hicks: For the challenge of it, mostly. As you said, mostly I’ve drawn comics set in the present, and I was tired of drawing school lockers and hallways. I wanted to draw a fantasy story grounded in my research on China in the 13th century. I should add, though, that The Nameless City is set in a fictional world that is based on historical China, but it’s not literally China. There is no “Nameless City” in history, although I did take inspiration from real-life places like Suzhou and Fenghuang.

Jesse Doogan: It’s so easy for Westerners to think of China as a racial monolith, but The Nameless City is very diverse. Your two main characters come from opposite sides of a racial divide. Did you begin with the intention of telling a story about that tension, or did that grow out of your research into historic China?

Faith Erin Hicks: Yes, absolutely! I really wanted there to be a diversity of Chinese people represented in the comic, as well as Central Asian and Middle Eastern people. I read about the history of the Silk Road and became fascinated by the idea of this massive trading route where all different kinds of people worked side-by-side under the banner of commerce. I wanted the Nameless City to be the Silk Road distilled into a single geographic location. It’s very multicultural, and with that diversity comes both struggle and strength.

Jesse Doogan: You’ve written your own graphic novels and collaborated with other writers like Rainbow Rowell. How does the process change for you as an artist when you’re collaborating?

Faith Erin Hicks: Rainbow is one of my favorite writers, and I’m thrilled and honored she wanted to work with me. When I’m the artist on a project (as opposed to the writer and artist), I feel like my job is getting the story the writer has in their head onto the page the best way I can. I’ve only worked with writers who don’t draw (as opposed to a writer/artist like myself), so I try my best to be faithful to their vision for the book. But I also want to be creatively fulfilled as well, so I bring my expertise as an artist to the table. Collaboration can be very fun. I get the best of whatever writer I’m working with, and I feel they get the best of me as an artist.

Jesse Doogan: You left your career as an animator to pursue a full-time career in comics. How did you decide to make that transition? Do you have any advice for anyone looking to switch creative careers?

Faith Erin Hicks: Switching careers was actually a surprise to me; I didn’t plan it at all! In 2008 the economy collapsed, and the Canadian animation industry ground to a halt. It was very difficult to find work. And then First Second Books hired me to draw this book called Brain Camp (written by Susan Kim and Laurence Klavan) and I decided, okay, I can’t find work in animation, so I’m going to draw this graphic novel full time for six months, and after that, I’ll see where I am. And then First Second bought my next project (Friends with Boys), and I kept getting work in comics and illustration.

And now it’s been eight years as a full-time cartoonist! It’s really weird how it happened. I guess my advice for those looking to switch careers is keep your stable, day job for as long as you can. Working freelance full-time can be very risky; I was lucky it worked out for me. Be careful with your money early in your career. Live as cheaply as you can, and save your pennies so you can get through lean times. Freelance is feast-or-famine. During the feast times, save what you can so you can survive the famine times. There are also other important elements to becoming a full-time freelancer: make your work easy to find online. Have a website with your name and contact info on it. If you get a job, take your deadlines seriously. Editors will hire you again if you are easy to work with and make your deadlines. Maintain a professional presence online. I could ramble on for paragraphs. There’s a lot to this freelance career stuff!

Jesse Doogan: If you had a time machine, but it could only send books, and it had a weight limit that meant you could only send three (the physics are apparently very complicated here), what three books would you send to your teenage self?

Faith Erin Hicks: I would send my teen self Fullmetal Alchemist by Hiromu Arakawa, The Scorpio Races by Maggie Stiefvater, and Bone by Jeff Smith. I think I would have loved the heck out of all of those books if I’d had them as a teen.