A Raw Look at Childbirth: Eleven Hours by Pamela Erens 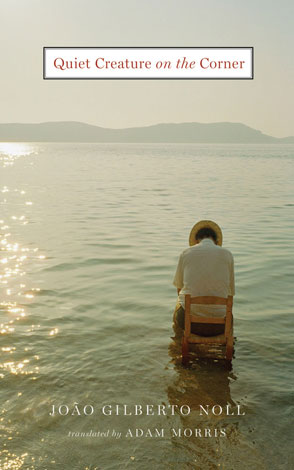 Despite the renown he has earned in his native Brazil over the past 30 years, João Gilberto Noll is all but invisible in English. The process by which any foreign author is granted entry into the transnational metropolis of “English literature” is often constituted as much out of the contingencies of fiction as it is the inexorabilities of truth. Bolaño, Knausgård, Ferrante—all three have achieved an enduring voguishness that is as much rooted in what Anglophone readers feel they need to know about the world as it is in what Western audiences believe justifies fame (or counts as genius) by virtue of an assumed universal consensus.

Quiet Creature on the Corner is the first of Noll’s many works to be thus translated, and after closing the covers on this slim, efficiently brutal book, one cannot help but marvel that it has taken so long for an enterprising publisher to open up the canons of American (North as well South) literature to his writing. Although written in the early 1990s, Quiet Creature on the Corner, in its sly satirizing of privilege, imperialism and cultural schizophrenia, feels as urgently relevant as any contemporary novel.

A synopsis of this book’s plot is fraught with unique risks. Some readers will no doubt refuse to follow a narrator who, in the first 20 pages, admits to raping one of his neighbors, then spends the rest of the novel in cozy confinements which ostensibly transcend both consequence and justice. Others might find this nameless narrator’s obtuseness too evocative of Camus or Kafka. And others still might be disinclined to give their attention to yet another fiction from Latin America that traffics in the tropes of so-called magical realism: characters who age at an unnaturally rapid rate; a poet who never actually composes any poetry, save on a napkin salvaged from an airport lunch counter; a persistent if indistinct haze of military violence hovering on every event’s horizon; and countless sensations that may or may not be hallucinations.

However, it would be a mistake to contextualize Noll’s narrative choices purely in terms of style. Like Mario de Andrade’s autochthonous Modernist fable Macunaíma or Cesar Aira’s improvisatory novellas, Quiet Creature on the Corner employs the rawest of narrative materials—”what happens”—to explore important questions regarding causality and the political abuses thereof.

Within the very first paragraph, our narrator declares he has just lost his job. As he returns to the apartment where he and his mother are squatting in Noll’s own home town of Porto Alegre, we are introduced to the particular textures that define poverty in this world. “My mother remarked that the milk was thick. Indeed, there were rings of fat down the sides of the glass.” Appetites are everything, whether satisfied in the form of soap operas watched on a “black and white TV that didn’t get all the channels”, a “slobbery joint” passed between teenagers killing time in the shadow of “a building whose construction was paralyzed right from the git-go”, or a beautiful young woman “singing a song that wasn’t half bad.” Any opportunity to exchange mere subsistence for pleasure here is to be seized. But with whom do we align ourselves when our pleasures result in the subjection of others?

How Noll chooses to answer that question is what lends Quiet Creature on the Corner both its frisson and its perplexity. Jailed only temporarily, the narrator is transferred to the Almanova Clinic in nearby São Leopoldo, where he eventually comes under the care of a German Brazilian named Kurt. He becomes a member of Kurt’s household, and falls into a rhythm that perverts the passage of time even as he’s aware that this rhythm—or tempo, arrhythmic; rubato?—is separating him more and more from the possibility of a life that is actually alive. (Even if, as the lone explicit dream in this dream-like narrative suggests, that life would be a peasant’s lot.)

All the same, our narrator cannot help but luxuriate in his apparent freedom, except in those moments when he acutely feels the potential loss of the licenses he enjoys. “I was getting dragged out from my situation under Kurt’s wing: if I got thrown in jail again he’d never give me another chance and I’d find myself face-to-face with complete shit all over again…” This anxiety is further accompanied by a drift into more conventional, if not healthy, desires.

… I was no loner a young boy, but a man in the fullness of my functions in need of a woman to keep my company—Kurt would need to give his blessing to this union, preferably with a blonde girl like Gerda [Kurt’s just-deceased wife] seemed she’d once been, he’d be so satisfied he’d give me half his fortune, opening the way not only to Germany but to who knows what other quadrants, and once I’d divorced the dumb blonde, a different woman in every hotel room.

With their manic logic, these passages encapsulate the narrator’s temporal existence under the influence of his own unfettered capacity to consume. Of course everyone around him is dying exponentially faster than he is; of course he is subject to lapses in memory; of course his perception of duration is impaired. And his contentedness, while only rarely disturbed, emerges as the chief source of whatever discomfort we readers experience in his company. The narrator does not comprehend how his choices—no longer aesthetic, but libidinal—have unleashed the colonizing violence of avarice, racism, classism, and an interpretation of history that awards subjectivity to the victors alone.

Adam Morris’s translation deserves special mention in this regard. William Arrowsmith once noted, “the act of translation presupposes a prior act of criticism.” Morris’s English rendition of Noll’s Portuguese feels interpretative in that sense. For example, the narrator declares himself a poet, but as his language angles to secure his grasp on success, it contorts itself into shapes that parody his existential parataxis. “The strong burning smell left me a little stupid, and into my head leaped the hypothesis that Kurt had set me up, that he’d never give anything up. I turned my belly to the sky, exhaled slowly. Overhead, an airplane was heading south.”

By pairing blunt diction with supple prosody and supporting a casual, even cool, “telling it like it is” tone, Morris’s translation effectively  discloses the dread and misgiving knotted up in the correspondences that seem always to work in the narrator’s favor.

Quiet Creature on the Corner augurs a notable English-language career for João Gilberto Noll. Provocative in both content and structure (think: a Satanic Bildungsroman), this deceptively modest, “one-sitting” novel is oddly accessible yet encourages multiple readings. One of the final images that tantalizes both the narrator and the reader here is a bonfire: “… it looked like a party had just ended, at the base of the fire things were already unrecognizable, twisted, various flames around them…”

Object and symbol alike are destroyed in this conflagration. And, as the narrator glimpses through the distorting lens of his miraculous “inheritance”, this fire reduces itself to ashes the more he stokes the warmth it provides him. And so causality, from the perspective of the oppressed, is anything but reassuring. Causality is worse than any absurdity, however fortunate. Causality is the essence of catastrophe.

Joe Milazzo is a writer, editor, educator, and designer in Dallas. He is the author of the novel Crepuscule W/ Nellie (Jaded Ibis Press) and The Habiliments (Apostrophe Books). His writings have appeared in Black Clock, Black Warrior Review, BOMB, The Collagist, Drunken Boat, Tammy, and elsewhere. He co-edits the online interdisciplinary arts journal [out of nothing], is a contributing editor at Entropy, and is also the proprietor of Imipolex Press.

Joe Milazzo is a writer, editor, publisher, designed and educator based in Dallas, TX. Learn more at: http://www.slowstudies.net/jmilazzo.

The Ruptures of Maternal Creativity in “Linea Nigra”

The Porous Borders Between this World and the Next in “Slipping”

The Open Space of Uncertainty in “Rabbit Island”